An Analysis Of College Basketball and Football Coaching Hires

Football and basketball coaching changes are heavily analyzed and scrutinized due to their significant impact on a university’s financial trajectory in athletics. According to USA TODAY, the average salary for FBS head coaches during the 2020-21 season was $2.7 million while 36 men’s basketball head coaches reportedly made at least $2.7 million in total pay themselves. Many states’ highest-paid public employees are FBS head coaches, such as Alabama’s Nick Saban ($8.9 million) and Florida’s Dan Mullen ($6.1 million).

However, most coaches never reach the FBS or Division-I level and even fewer become head coaches in major college sports. Previous ADU research studies have covered this subject in detail, such as the role that search firms play in coach hirings as well as data that statistically proves institutionalized discrimination in job searches.

The study below serves as a guide in the hiring practices in both sports, identifying key trends in coaching experience and job types and how they influence head-coaching hires.

The chart below shows the average experience in total years of first-time head coaches hired since 2014. 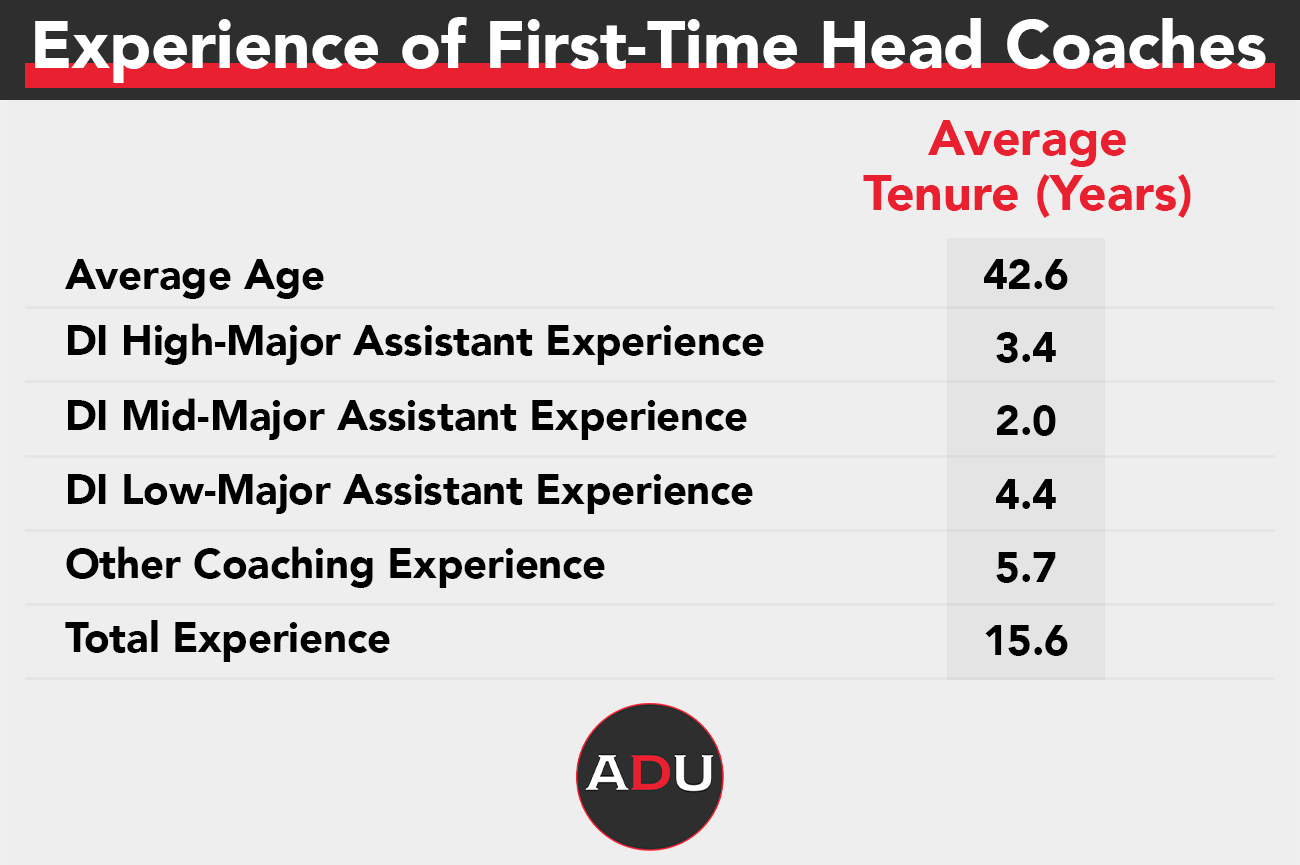 In Division-I men’s basketball, the average age of a first-time head coach is 42.6 years old with 15.6 years of coaching experience, including 9.8 years of full-time experience at the Division-I level.

As such, most coaches begin their careers as grad assistants or as assistants at the high school level. This career stage is the longest, on average, for most eventual head coaches. More than two-thirds of total coaching experience is at the D-I low-major level or outside of D-I for those who become head coaches. 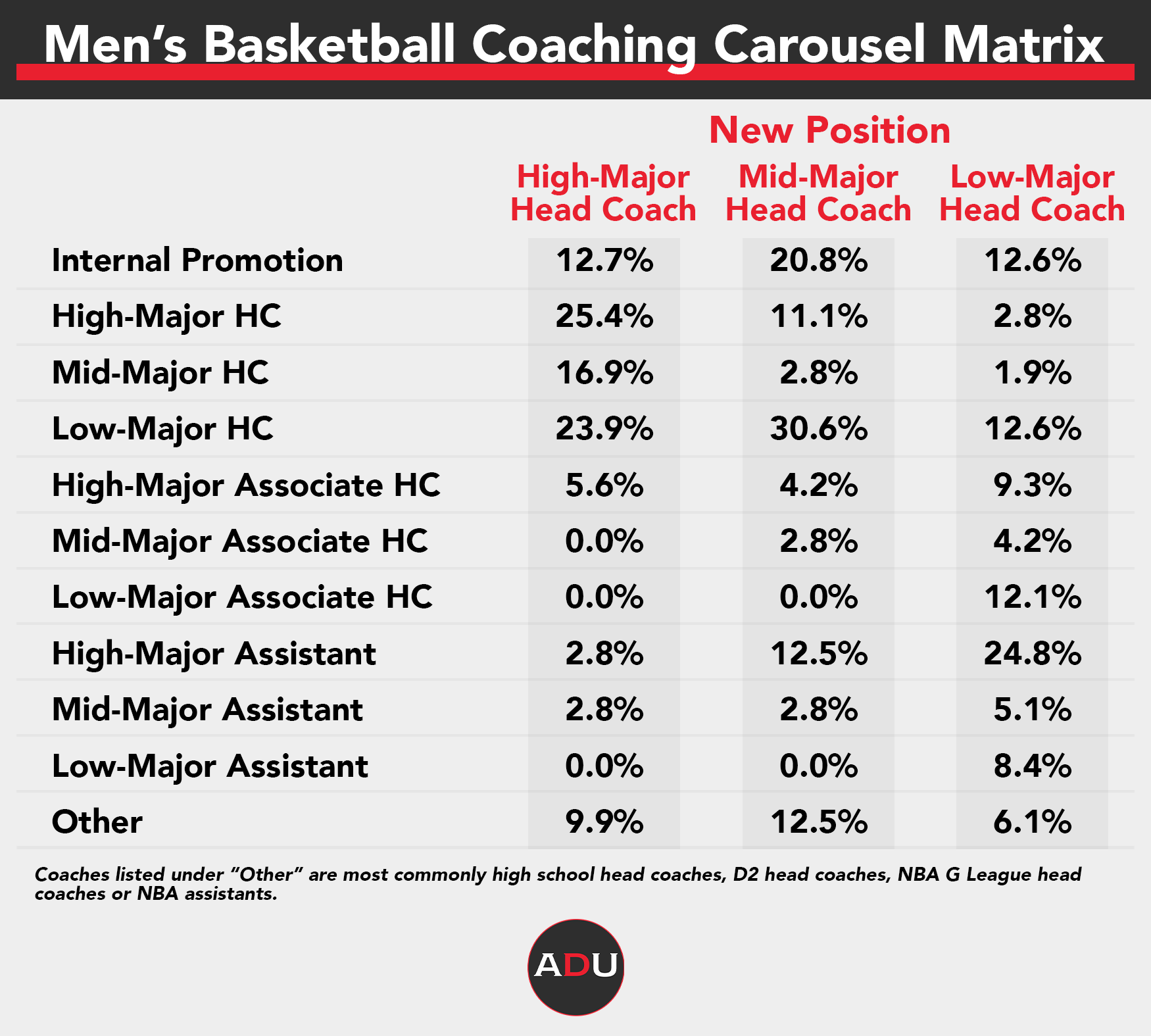 The vast majority of first-time head coaches begin at the low-major level and have sustained success before opportunities in the major conferences. Of the 133 first-time head coaches hired since 2014, 15 (11.3 percent) began at a high-major, 20 (15.0 percent) at a mid-major and 98 (73.7 percent) at a low-major. Most of the first-time coaches who started at high-majors were either longtime assistants of notable coaches (Arizona’s Tommy Lloyd under Mark Few; Washington’s Mike Hopkins under Jim Boeheim) or former professional stars (Michigan’s Juwan Howard; Vanderbilt’s Jerry Stackhouse; Georgetown’s Patrick Ewing).

High-major programs also have more bandwidth to hire active head coaches than mid-majors or low-majors. High-major programs hire active head coaches to fill 66.2 percent of all vacancies while mid-majors do so in 44.5 percent of hirings and low-majors just 17.3 percent of the time. For smaller conferences, candidate pools are often limited. When coaches thrive at the lower levels, they frequently interview for bigger, higher-paying jobs, forcing the smaller program to rebuild.

Several head coaches, over time, groom former assistants who are now active head coaches themselves. Joining coaches with track records of developing younger coaches can prove to be valuable experience that leads to head-coaching opportunities.

Chris Beard’s linear growth from coaching at the D-II level to the University of Texas in just an eight-year span has caught college basketball by storm. Wes Flanigan and Mark Adams succeeded Beard at Little Rock and Texas Tech, respectively, while Brian Burg and Chris Ogden landed head jobs via the Texas Tech bench.

Since taking over at Texas, Beard has assembled what is widely regarded as the best coaching staff in the country. Ogden and UTEP’s Rodney Terry both left head-coaching jobs to join Beard’s staff, in addition to nationally recognized recruiters in Jerrance Howard and Ulric Maligi.

For an example on how to read the chart below, former ACC coaches have filled 7.3 percent of all D-I head-coaching vacancies since 2014 and have gone on to average a 52.1-percent tenure winning percentage at an average job level of 0.63. 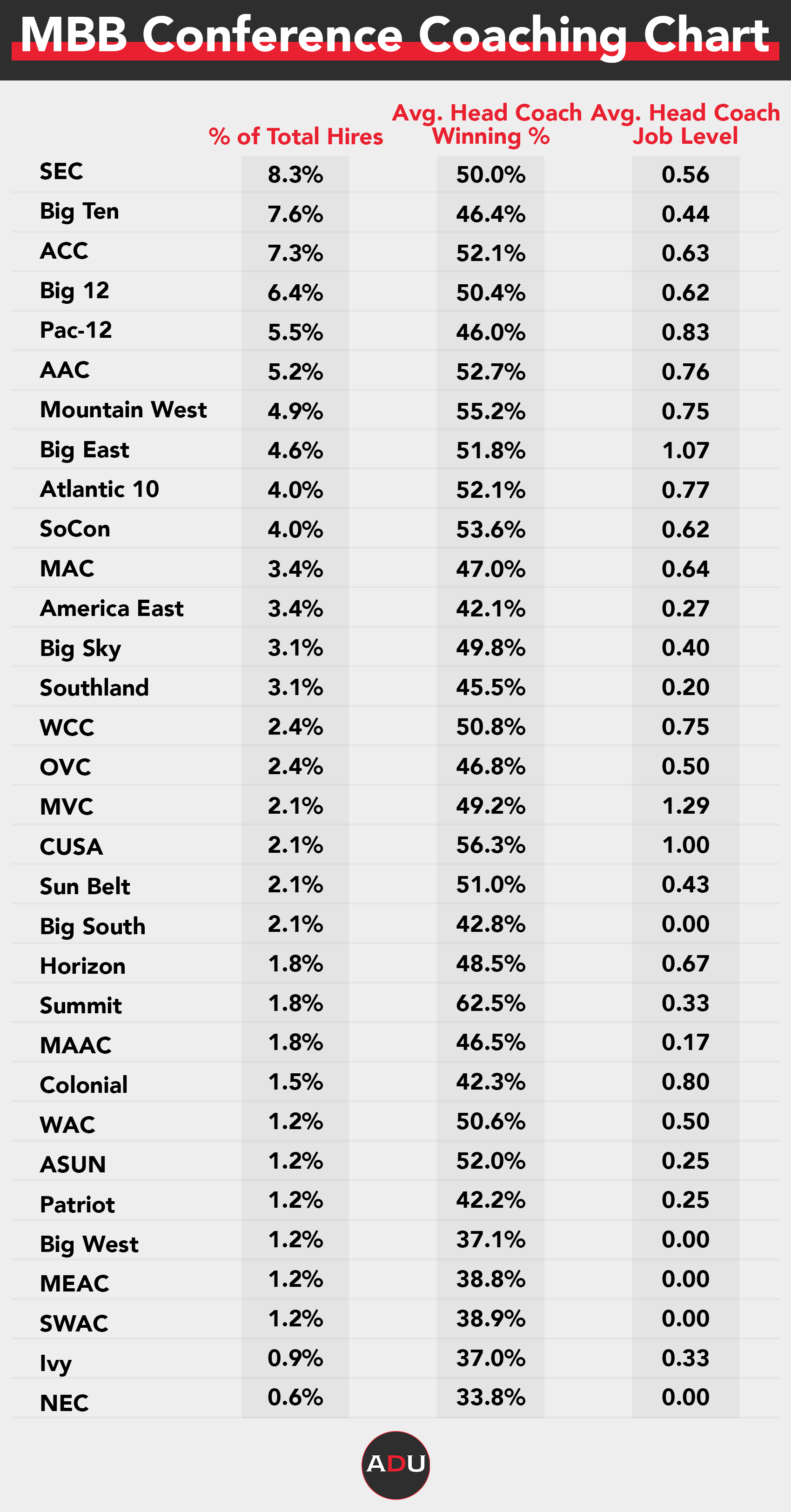 While the SEC and Big Ten combine for 15.9 percent of head-coaching hires, the majority of these head-coaching positions fall into the low-major basket. The Big East ranks 8th in percentage of total hires but the conference produces far more head-coaching opportunities in mid-major and high-major leagues. During the 2021 coaching carousel, Minnesota hired Xavier assistant Ben Johnson and Fordham hired Villanova assistant Kyle Neptune while Loyola Marymount hired Marquette associate head coach Stan Johnson in 2020, all of which are hires within traditional multi-bid leagues.

Meanwhile, five conferences — the Big South, Big West, MEAC, NEC and SWAC — didn’t have a former assistant, associate head coach or head coach leave the conference for a head-coaching position in a mid-major or high-major league since 2014.

Some conferences are hit with coaching turnover more than others. As seen below, the America East has the highest average tenure length among its coaches, based on median tenure lengths since 2014.

There is also significant evidence that more assistant experience in multi-bid conferences leads to higher-level, first-time jobs as head coaches. However, it doesn’t necessarily equate to a quicker route towards a first-time job or more success once there.

The chart below breaks down first-time head coaches based on percentage of total years spent on a high-major or mid-major staff as an assistant.

Moving over to football, the experience profile for a first-year coach at the FBS level is below. The average first-time head coach is 43.2 years old, just barely exceeding college basketball’s 42.6-years-old average.

The table below shows the most common coaching job types, how often eventual FBS head coaches worked at the specified job type, and the average tenure length of the job type.

For example, 32.6 percent of eventual FBS head coaches were once Power-Five associate head coaches and had an average of 2.71 years in the position. 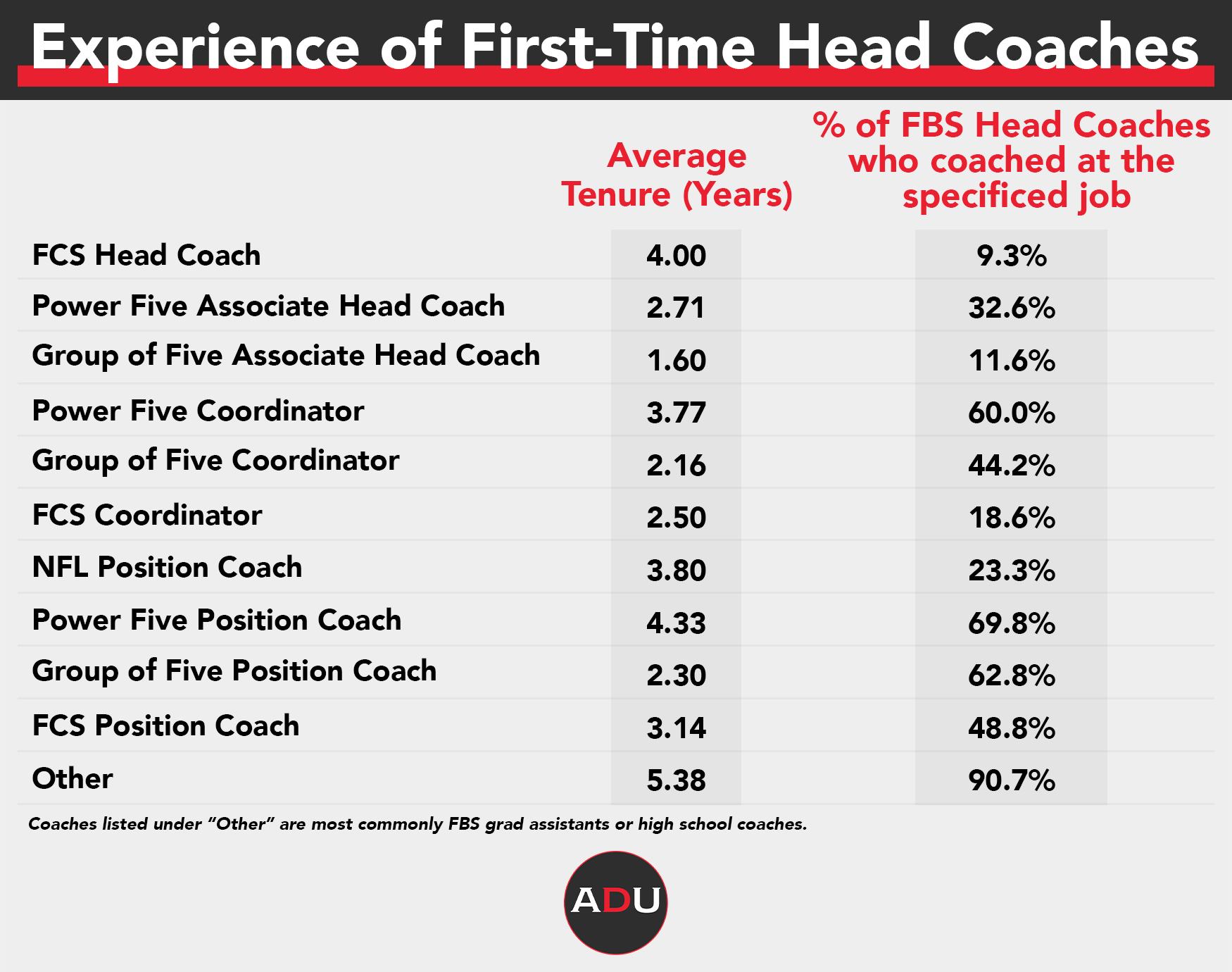 Most coaches begin in the “Other” job level as either an FBS grad assistant or an assistant at the high school level. This is the longest average tenure of any job type at 5.38 years and over 90 percent of all eventual FBS head coaches begin at this level.

From there, more than 60 percent of coaches begin working with specific positional groups in FBS — 69.8 percent at the Power-Five level and 62.8 percent at the Group of Five level. With an average of 16.9 years of coaching experience prior to their first FBS head-coaching position, most coaches don’t spend more than two or three years at the same position once they reach the college level, meaning there are constant changes in positions, roles and programs.

Among the notable takeaways from the above table is the infrequent transition between FCS and FBS. Few FBS head coaches were once full-time FCS assistants and it is also exceedingly rare for FCS head coaches to climb into the same position at the FBS level. Since 2014, Kansas State’s Chris Klieman is the only FCS head coach to jump directly to a Power-Five program. Klieman spent the previous five seasons at North Dakota State, winning four FCS national championships and earning a 69-6 overall record before being hired by Kansas State ahead of the 2019 season.

Determining the job type that leads to an FBS head-coaching position is vital information as well, although it varies greatly depending on whether the position is Power-Five or Group of Five. 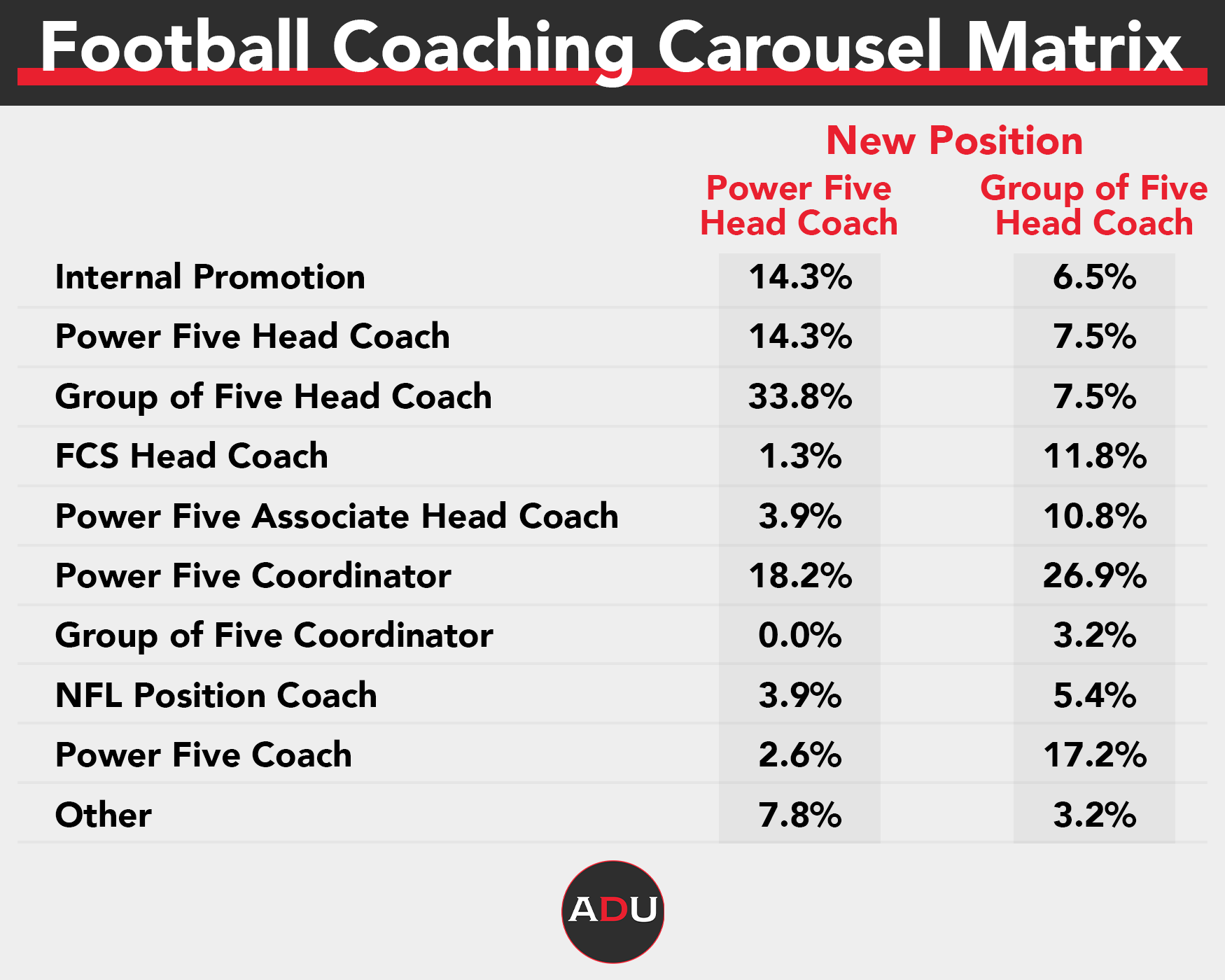 Like basketball, coaching trees are especially relevant in FBS as well. Below are the four coaches who have had at least three former staffers become head coaches for the first time since 2014.

Alabama head coach Nick Saban has also created bridges between his former staffers and FBS head-coaching vacancies. However, the majority of coaches who assumed head-coaching duties after their time under Saban at Alabama were head coaches at one point before joining the Crimson Tide, such as Steve Sarkisian (Texas) or Mike Locksley (Maryland).

The SEC is also the most frequent conference target for head-coaching choices in FBS, collecting 20.9 percent of all hires. 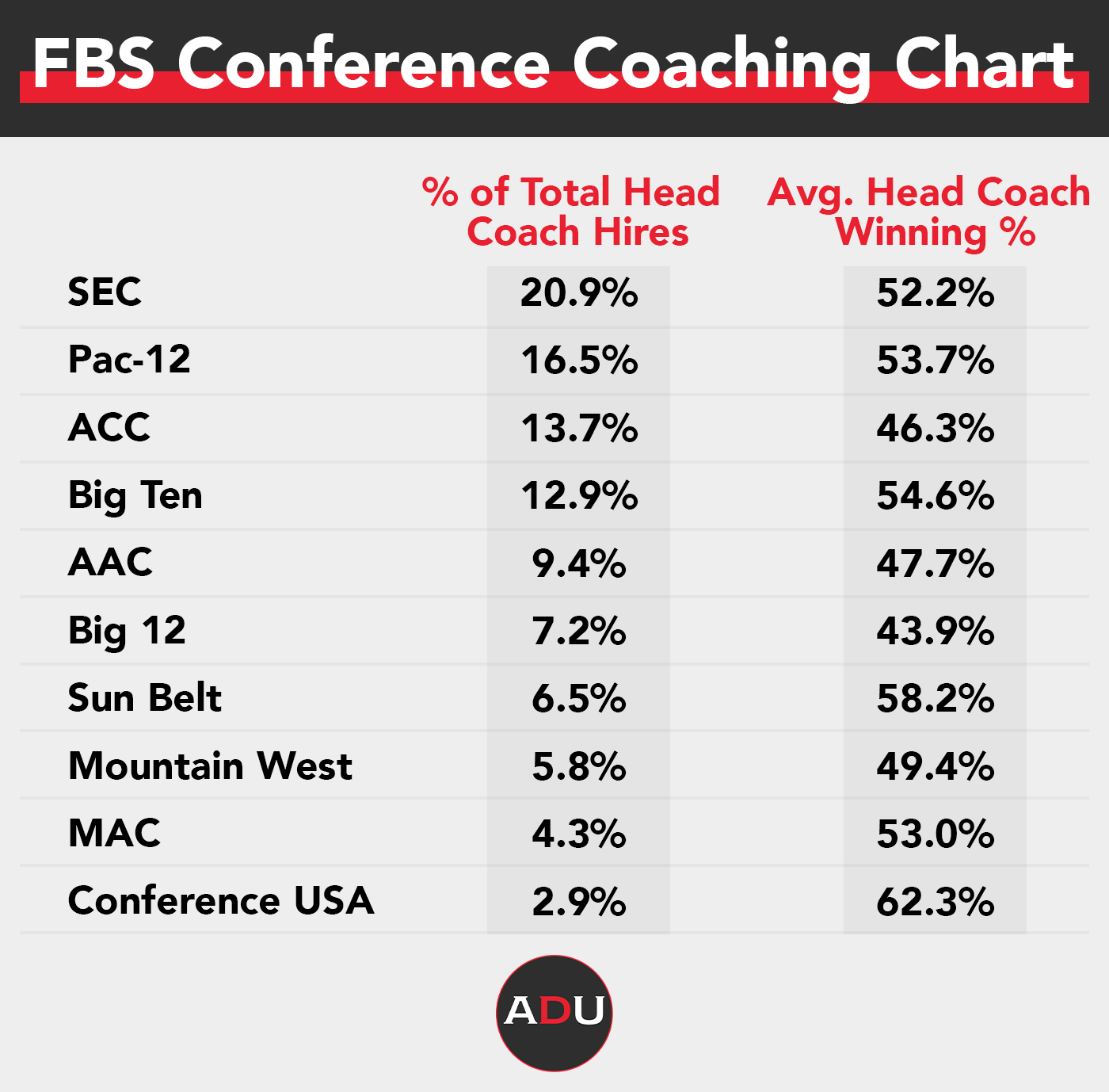 While it creates the fewest head-coaching opportunities, the Conference USA maintains the highest average winning percentage among coaches hired from its conference. Notable hires from the Conference USA include Ole Miss’ Lane Kiffin (Florida Atlantic), Purdue’s Jeff Brohm — who was promoted to Western Kentucky head coach in 2014 and hired at Purdue in 2017 — and Louisville’s Bobby Petrino (Western Kentucky).

Although there will never be an exact checklist assistants need to become NCAA head coaches, understanding trends and commonalities within the coaching carousel can help narrow and refine career goals.

As seen in the data above, there are particular qualifications that most coaches meet prior to taking over head-coaching positions, whether it may be serving as an assistant at a particular level, studying under the sport’s prominent coaches or aligning with conferences that have successful track records.

Combining the aforementioned facts and figures and applying the information to what we currently know about FBS and men’s basketball coaching staffs, it’s possible to more closely identify the current assistants who could join the next wave of successful head coaches in the years to come.

Articles
The Rising Tide: Why and How Cobranded Group Licensing Works

As we get further from the actual day, July 1, 2021, and as the dust settles from the initial whirlwind of activity, college administrators have been left to sort out what the changes to name, image and likeness policies actually mean on campus. What can or can’t a school do for and with its athletes?

Articles
How Much Money Can An Expanded College Football Playoff Generate?

With the College Football Playoff’s board of managers recently approving a feasibility study to determine the viability of an 12-team playoff model, and another possible round of major-conference realignment on the horizon, it seems all but inevitable the that CFP will expand within the next few years.   In order to calculate what types of

When the long-awaited Tokyo Olympics finally get underway, American television viewers will be fixated, as they usually are, on the sports which NBC tells us we want to see. As NBC’s day-by-day highlights suggest, it will be heavy, as always, on swimming, track and field, gymnastics, and basketball, events in which Team USA should do