By Jason Belzer and Eli Boettger

An ongoing struggle in today’s business world is ensuring equal opportunity and inclusion of employees regardless of race, ethnicity or gender. This focus is especially prevalent in college athletics, where minorities have been consistently under-represented.

Due to the vastness of Division I college sports, where more than 350 programs span from the West Coast through the South all the way up to the Atlantic, conferences and geographical regions handle the hiring and firing process of coaches uniquely.

We have gathered and analyzed data regarding head coaching firings, resignations, retirements and hirings over the last decade (2008-2017) in NCAA Division I men’s and women’s basketball, covering almost 1000 transactions. The data reveals that racial hiring and firing practices of head coaches should be at the forefront of discussions in major college sports.

To begin, we analyzed the percentage of total head coaching hires for both men’s and women’s basketball that resulted in a coach leaving for retirement, a new job, or a coach that was either fired or forced to resign. We agreed that coaches fired or forced to resign should compile the same category in our data, as both actions would suggest the removal of a head coach. Traditional Historically Black Colleges and University (HBCU) conferences, like the Mid-Eastern Athletic Conference (MEAC) and Southwestern Athletic Conference (SWAC) were not included in our D-I data averages for the sake of avoiding potentially skewed data.

The table below indicates the percentage of head coaching hires for men’s and women’s basketball that resulted in the three aforementioned designations (retirement, leaving for new job, fired/forced to resign) over the past ten seasons. 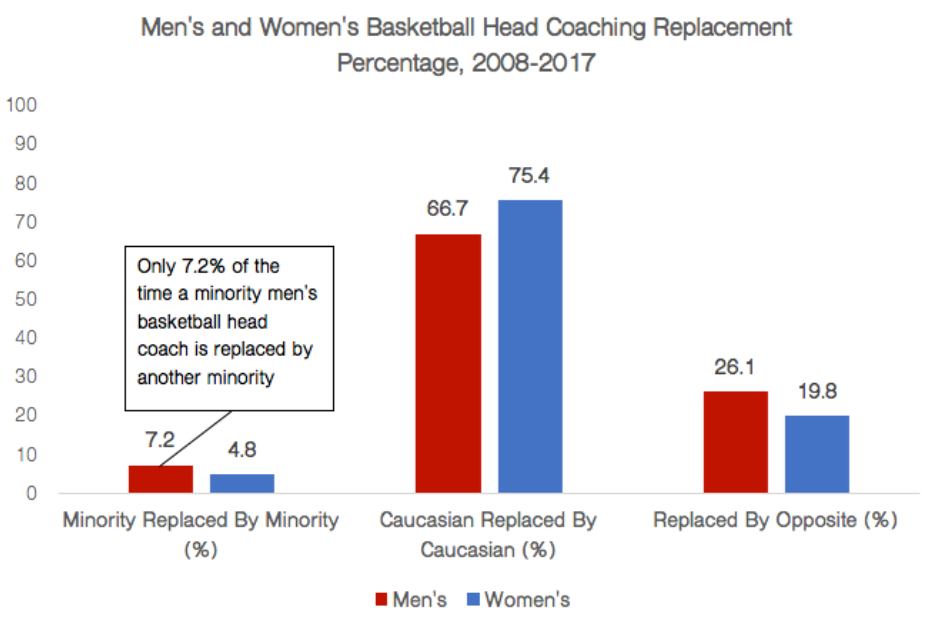 As expected, Caucasians replacing Caucasians is the most frequent head coaching replacement outcome. In men’s basketball, two-thirds of the time a head coaching change involves a Caucasian replacing another Caucasian, compared to just 7.2% of the time a minority replacing a minority. The numbers are very similar on the women’s side, though Caucasian-Caucasian replacements are even more frequent (75.4%) than in men’s basketball (66.7%). Fewer than 1 in every 20 coaching hires is a minority being replaced by another minority in women’s basketball (4.8%). To put it simply, it is extremely rare that Division I athletics programs give minorities as a whole more than one chance at leading their basketball programs.

We further calculated a ratio which indicates the frequency of head coaches leaving for new jobs as it compares to firings and forced resignations for both men’s and women’s basketball. The chart below indicates the number of head coaches that have been fired or forced to resign for every head coaching vacancy that has opened.

When broken down by conference, even more noteworthy data was revealed. We calculated and compared the ratio of head coaches fired or forced to resign as well as hired for each of the 30 non-HBCU conferences for men’s and women’s basketball. 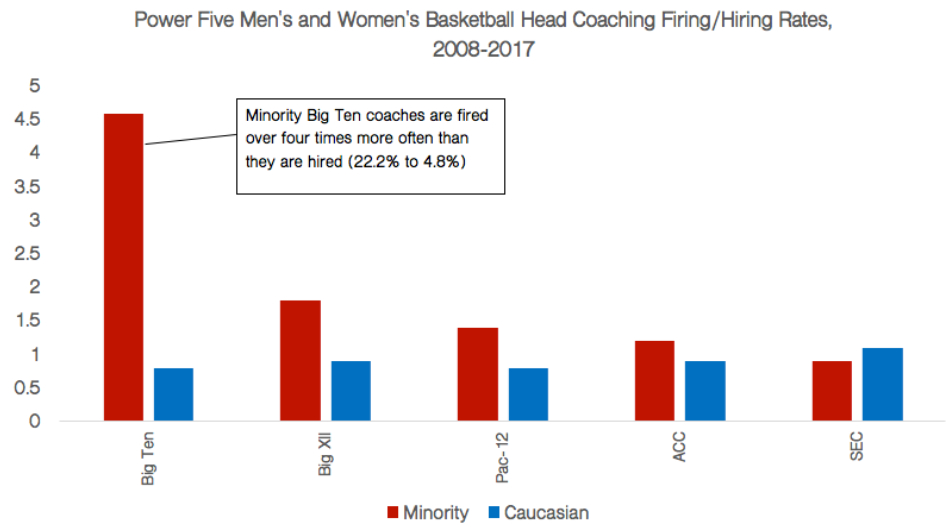 The Big Ten has by far the largest disparity between its firing/hiring rates of minorities as compared to Caucasians. Just 4.8% of head coaching hires in Big Ten men’s and women’s basketball are  minorities, but minorities make up 22.2% of the conference’s firings or forced resignations. The minority hiring rate is the lowest of any D-I conference, and the firing rate is over twice as high as any other conference. Big Ten minority coaches are fired 4.6 times as often as they are hired, while the next-highest is the Mid-American Conference at 2.0, with the national average at 1.2.

The MAC has the highest firing/hiring rate for minorities among non-Power Five conferences. Minorities make up 33.3% of the league’s hirings but 65% of the firings, while the numbers are nearly opposite for caucasians (66.7% of hirings, 35.0% of firings). The Atlantic 10 and Missouri Valley also have minority firing rates nearly twice as high as hiring rates. The Missouri Valley has the nation’s highest non-power five conference caucasian hiring rate (88.9% of all hires), but minorities still generate 20% of the league’s firings. 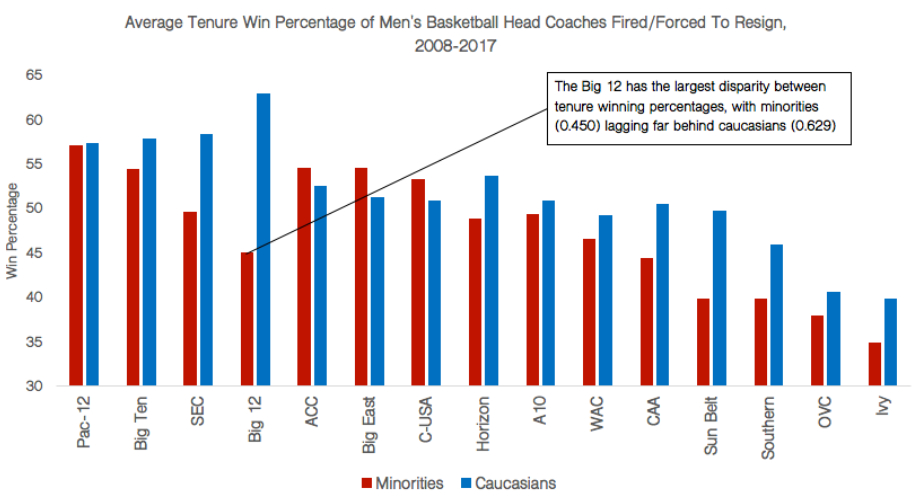 The largest disparity between win percentages is the Big 12. Caucasians have an average tenure winning percentage of 0.629, while minorities lag behind at 0.450. The difference of 17.9% is the widest margin in the country and the only difference that is over 10% between minorities and caucasians. Big Ten minority coaches that have been fired or forced to resign are fourth in the country in average tenure win percentage (0.544), but make up the nation’s largest firing rate by a large margin.

The data collected and outlined above shows strong evidence that minority basketball coaches are discriminated against not only when it comes to becoming head coaches, but also their retention in such positions. Both men’s and women’s minority coaches are fired at rates more than twice that of their Caucasian counterparts, while also being giving less time to prove their worth as leaders. Minority coaches in women’s basketball are treated with particular unfairness, with the majority of programs hiring minorities, only to quickly turn around and fire the coach they just hired a few short years later.

Of course, it is worth noting that there are likely a number of factors involved that have lead to such institutionalized discrimination. While AthleticDirectorU has explored a some of these already, it is also likely that a perceived lack of head coaching readiness among minority candidates, combined with narrow candidate interview pools, are contributing at least somewhat to such high termination rates. Often times, athletic directors will interview more Caucasian candidates than minorities, and if the decision is eventually made to hire that latter, that individual may not necessarily be as qualified as their peers of the same skin-color. Not only must there be a increase in the quality of leadership education for young minority coaches (something the Collegiate Coaching Consortium is working to address), but athletic programs must strive to interview many minority candidates (rather than a token few) in order to best ascertain the readiness of each one of those candidates.