Takeaways From A Future Student Athlete’s Day In The Life

Part I and Part II of our Day In The Life series presents a variety of policy issues intertwined with if, what, when, who, where, and how college athletes could pursue NIL activities while still maintaining their NCAA competition eligibility. Using Ringo’s storyline as the backdrop, let’s take a deeper dive in identifying and explaining a few key rules and policy considerations that surfaced in this fictional tale.

Amateurism Is The Bedrock Principle

The foremost distinction, many would say, between pro sports and college sports in America is that college athletes don’t get “paid” aside from scholarship. The principle of amateurism—pursuing their athletic endeavors for altruistic reasons and the physical, mental and social benefits to be derived. Nowhere in that clause is there reference to financial benefits to be derived by the college athlete.

In our storyline, Ringo was a student-athlete on scholarship attending classes and playing for his school—he was not an employee hired to play a sport for his university. When assessing the evolving NIL landscape, understanding the foundational NCAA principle that is amateurism is key. Amateurism sets the stage for more specific distinctions that will impact NIL activities such as how much engagement a student-athlete can have with an agent or if and how fair-market value could be a required “amateurism variable” in assessing NIL compensation under future NCAA rules. 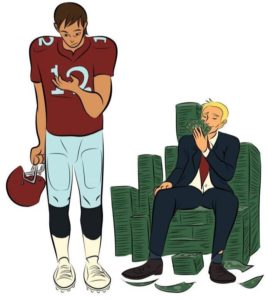 The NCAA Board Of Governors’ Guidelines

Speaking of NCAA rules, keeping an eye on NCAA leadership’s position stewarding the anticipated NIL policy changes is also noteworthy. The NCAA Board of Governors laid out the following principles and guidelines to shape its future NIL policies:

The Board’s list covers a lot of territory. Everything from keeping the “student” in student-athlete, to keeping them miles away from any employee status under labor law. NIL policies will require certain concessions and rescission of a few long-standing NCAA rules (e.g., endorsing products; using NIL for commercial purposes), but a wide swath of NCAA amateurism bylaws—especially about “pay for play” and open-ended agency representation will likely remain if the Board of Governor’s priorities hold serve.

State Laws Are A Catalyst To Change

One of the catalysts compelling action by the NCAA and at the federal level to change NIL policies are the state legislatures and governors who have been leading the policy-makers pack by more expeditiously passing legislation to enact additional protections and permissions (including NIL usage) for college athletes in their state. Florida is the state on everyone’s radar as it’s the state with the first state bill to take effect—-July 1, 2021. Whether congress and/or the NCAA can sort through the layers of policy jockeying and posturing by July 1 to arrive at a nation-wide solution applicable to all student-athletes at all colleges remains to be seen. If Ringo was attending school in Florida, this fictional storyline could become a reality in the latter half of 2021.

Ringo’s story included the fact that he had gained some level of fame. His highlights were making local and national tv coverage. His clutch bucked with time running down that made ESPN’s SportsCenter Top 10 was seen by millions. That fire-power of media coverage behind college athletics at the highest level helps raise the profile and familiarity of college athletes like Ringo that, in turn, make them appealing to various marketplaces.

Interestingly, a student-athlete playing in a nationally televised game is already commercialized in many ways. There may be sponsor logos coming across the screen throughout a broadcast. A particular highlight might be “sponsored by XYZ company”. The play-by-play announcer may be reading a commercial script as part of the audio captured during a game.

NCAA rules have drawn a fine line between permissible media coverage (including live game footage, in-game highlights) that isn’t considered an amateurism violation versus the direct use of a student-athletes NIL to clearly endorse or promote a commercial product or service. Perhaps the distinction is passive vs active, indirect vs direct.

Either way, college athletes’ exposure through television, social media, and other outlets in a permissible way has helped build their personal brands for the potential commercial opportunities in the future NIL landscape. 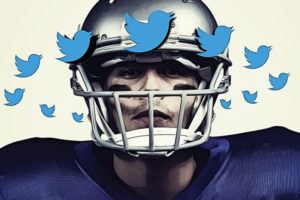 Society now consumes content including sports in a multitude of ways. The days of solely reading the sports section in a printed newspaper or watching sports on one of three broadcast networks reflects a media landscape from a bygone era. We live in a social media, click and swipe society. In a Day In The Life, we found Ringo happily obliging fellow students at his school for a quick “selfie” that would soon find itself on social media. A random college student capturing a picture with Ringo and posting to their social media this week will be viewed, liked and retweeted hundreds of times.

NCAA rules do not specifically restrict the use of social media by student-athletes. Rather, NCAA rules only come in to play with social media when other NCAA rules are implicated—such as a student-athlete commercially endorsing a product on their Twitter account or a college coach creating impermissible publicity about an unsigned recruit by commenting about the unsigned prospect on their team’s Facebook page.

In Ringo’s communication with the Kegman’s marketing team, Ringo was offered $10,000 for a package of promotional activities–one autograph appearance at the store closest to campus, one print ad/photo shoot, one tv ad, and a few social media “influencer” spots over the next 90 days. The social media spots for the grocery store chain would conveniently overlap with the NCAA men’s basketball tournament (aka March Madness) when interest in college basketball peaks.

The NCAA’s first iteration of NIL proposals included an overarching expectation for student-athletes to disclose the details of each NIL transaction. Although the exact granular details needing to be disclosed has yet to be sorted and is a source of debate. We imagine key NIL transactional details such as the sponsoring company’s name/location/contact; a description of NIL activity; the compensation level; date(s) and location of activity; platform of activity (e.g., in-person vs social media), whether the student-athlete has retained agent or marketing firm for NIL representation; among other details.

As alluded to above, one debated aspect to NIL transactions is whether fair-market value should be a required disclosure detail or, more broadly, if it can even be ascertained. When a high-performing, all-American student-athlete who wins the Heisman Trophy can now go to the marketplace for endorsements – how will we know what he is being offered is fair-market value? The underlying concern from NCAA-world are the recruiting inducement possibilities if a fair-market value can’t be ascertained for NIL opportunities involve an NCAA school’s booster.

Part of the transformational experiences college provides to young adults is the idea that a college education as well as the social experiences prepare them for life. As student-athletes delve in to NIL opportunities including activities generating compensation, the life skills and, more acutely, business skills will need to be honed. How far schools can (or even want to) help student-athletes in personal transactions remains to be seen.

Either way, student-athletes, like Ringo, will need to bridge the learning curve including on tax implications of their earnings. Many college students may never have filed taxes having recently entered adulthood. Student-athletes are no exception. Ringo earned $2500 that was sent to his Venmo for completing the first phase of his endorsement deal with Kegman’s. Does Ringo know how that $2500 may be taxed at local, state, and federal level? Is he tracking?

In closing, the NIL landscape in early 2021 may be best described as long-line outside the movie theatre snaking around the block as people wait to see the long-awaited blockbuster on opening day. Those theatre doors won’t open until a variety of stakeholders sort through the politics and policy interests in a stampede toward new laws. Marketers for companies of all shapes and sizes will be advantaged if they pay attention to the NIL opportunities around the corner as well as the future rules of the game.