The Inequality Of Coaching College Basketball

The treatment of people based on the color of their skin is front and center in American life right now. From law enforcement, to pay equity, to hiring practices these differences can be seen plain as day across most areas of life. While college basketball is certainly more diverse than many areas of American life, there is still a difference in the way minority and white coaches move within the coaching ranks.

While the player population is overwhelmingly comprised of minorities, those percentages do not carry over to the coaching ranks. Looking at all NCAA D1 head coaches from the 2007-08 through 2019-20 seasons, 34% of head coaches were minorities, while 66% of head coaches were white. Those percentages, however, are crude in that they do not account for coaches who have longer careers. Leonard Hamilton’s 18+ season’s at Florida State weigh the same as Travis Steele’s 2+ seasons at Xavier.

Another angle would be to look at total seasons coached by minority and white coaches as a percentage of the total number of seasons coached overall in the entire data set. This more granular look paints a much starker picture. Since the 2007-08 season 22% D1 men’s basketball seasons were coached by minority head coaches, while 78% of seasons were coached by a white head coach. Perhaps ironically, the season-adjusted percentages for coaches (22% minority vs. 78% white) are almost the mirror opposite of the player population (77% minority vs. 23% white).

Moving down the bench, the racial discrepancies become less severe.  Minority coaches over the same time period account for 46% of assistant coaches compared to 54% for whites. Adjusting for total seasons coached, the balance tilts a bit towards white coaches (44% minority, 56% white), but not nearly as much as seen with head coaches. Table 1, below, summarizes these percentages: 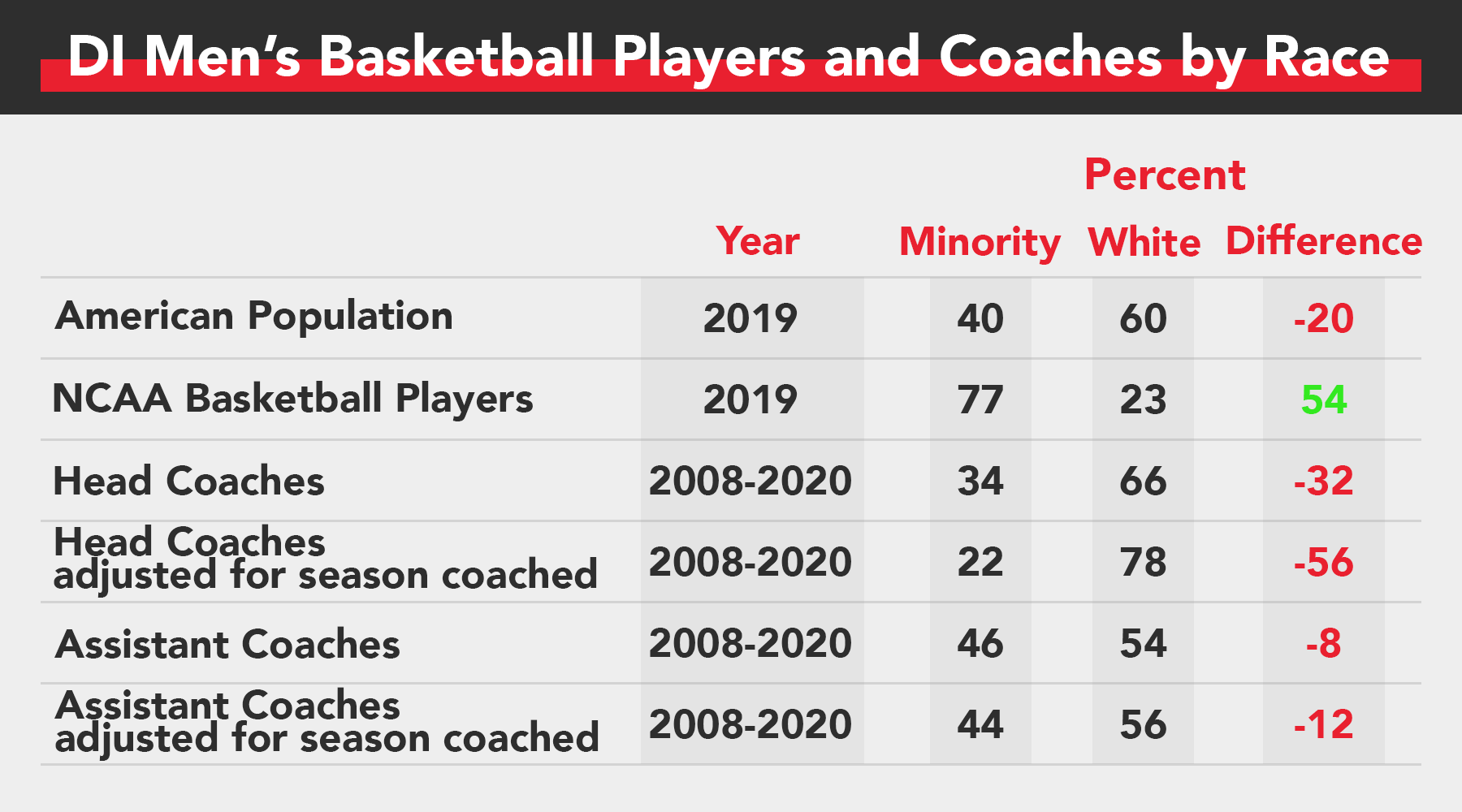 Why is this? Why are there so few minority head coaches compared to players and assistant coaches? The discrepancy is particularly noticeable when you consider that the pipeline to a head coaching position (assistant coaches), is much more equitably split between minorities and whites. That discrepancy alone implies that the pathway to a head coaching position is truly more difficult for minority coaches than it is for their white peers.

The Carousel Analytics database includes the entire career history of every head and assistant basketball coach at the D1 level since the 2007-2008 season. In order to look at these questions in depth, race was added as a variable to the database. To ensure comparisons are apples-to-apples, only coaches who ultimately became a D1 men’s basketball head coach at any point in their career were included in the analysis dataset.

First, we will look at whether there is a difference between minority and white coaches in terms of their first job on a D1 coaching staff. This includes any job as a member of a basketball staff after graduation. For example, student athletes and student managers are not included. However, graduate assistants and other sort of support staff roles are included. Titles such as Director of Player Development, Director of Recruitment, Special Assistant to the Head Coach, and Video Coordinator are lumped into the Support Staff (SS) category. Lastly, this does not include first jobs that were outside of the D1 level (D2, D3, Pro, HS). If a coach was a D3 assistant for 5 years before becoming a Graduate Assistant at the D1 level, their first job would be considered a Graduate Assistant. 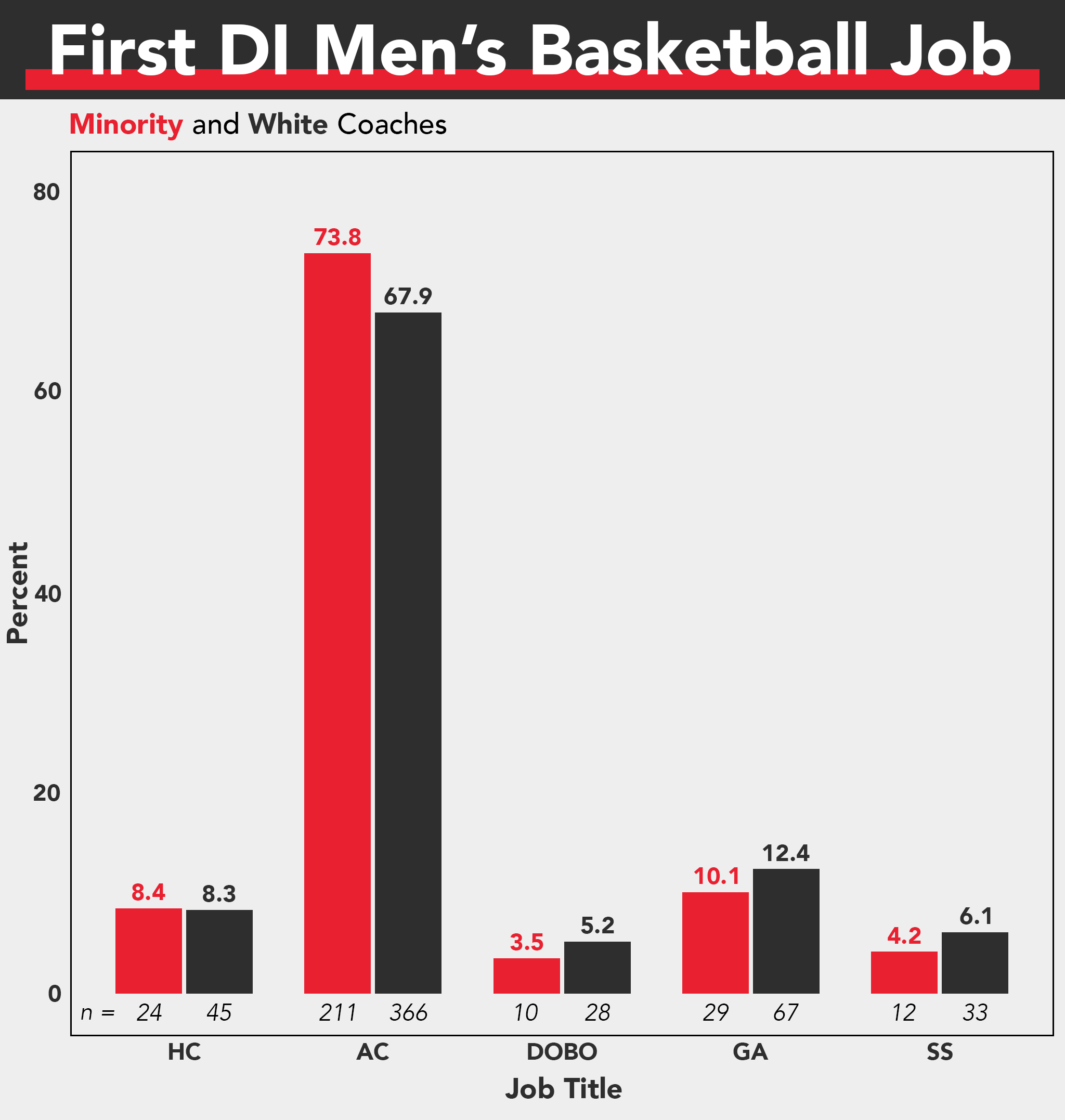 Figure 1 shows the percent breakdown, by race, of where coaches tend to get their first job at the D1 level. The big takeaway from Figure 1 is that when it comes to first jobs at the D1 level, a similar percentage of minority coaches jump straight into a Head Coach job as their white counterparts (8.4% vs. 8.3%). For individuals whose first D1 job was as an assistant Coach, minority coaches appear to start at the assistant coach level more frequently than white coaches (73.8% vs. 67.9%). Looking at jobs that are lower down the coaching ranks, white coaches tend to start their careers as a DOBO, GA, or SS member frequently than their minority counterparts.

Figure 2, below, takes the same data as above and breaks down whether those first jobs are being taken at low, mid, or high major schools. The left panel shows data for minority coaches, and the right panel shows data for white coaches. Beginning with the head coach position, it is noticeable how similar the percentages are between minority and white coaches. Both groups enter the D1 world as a head coach at the low major level around 4% of the time. There is a slight difference at the mid and high major levels, where minority coaches enter at those levels 2.4% and 1.7% of the time compared to 3.5% and 0.7% for their white peers.

Moving down the bench to those who enter the D1 coaching world as an assistant coach, we start to see some more noticeable differences. A much higher percentage of minorities start as a low-major assistant coach (28.3% vs. 18.4%). That gap narrows at the mid major level (35% vs. 32.3%), and is flipped in favor of white coaches at the high major level (10.5% vs. 17.3%). Again, white coaches tend to enter the coaching ranks at the DOBO/GA/SS level more frequently and at a higher conference level than their minority counterparts. The key takeaway here is that other than first jobs as a head coach, minority coaches usually enter the D1 coaching world at a lower conference level than white coaches. 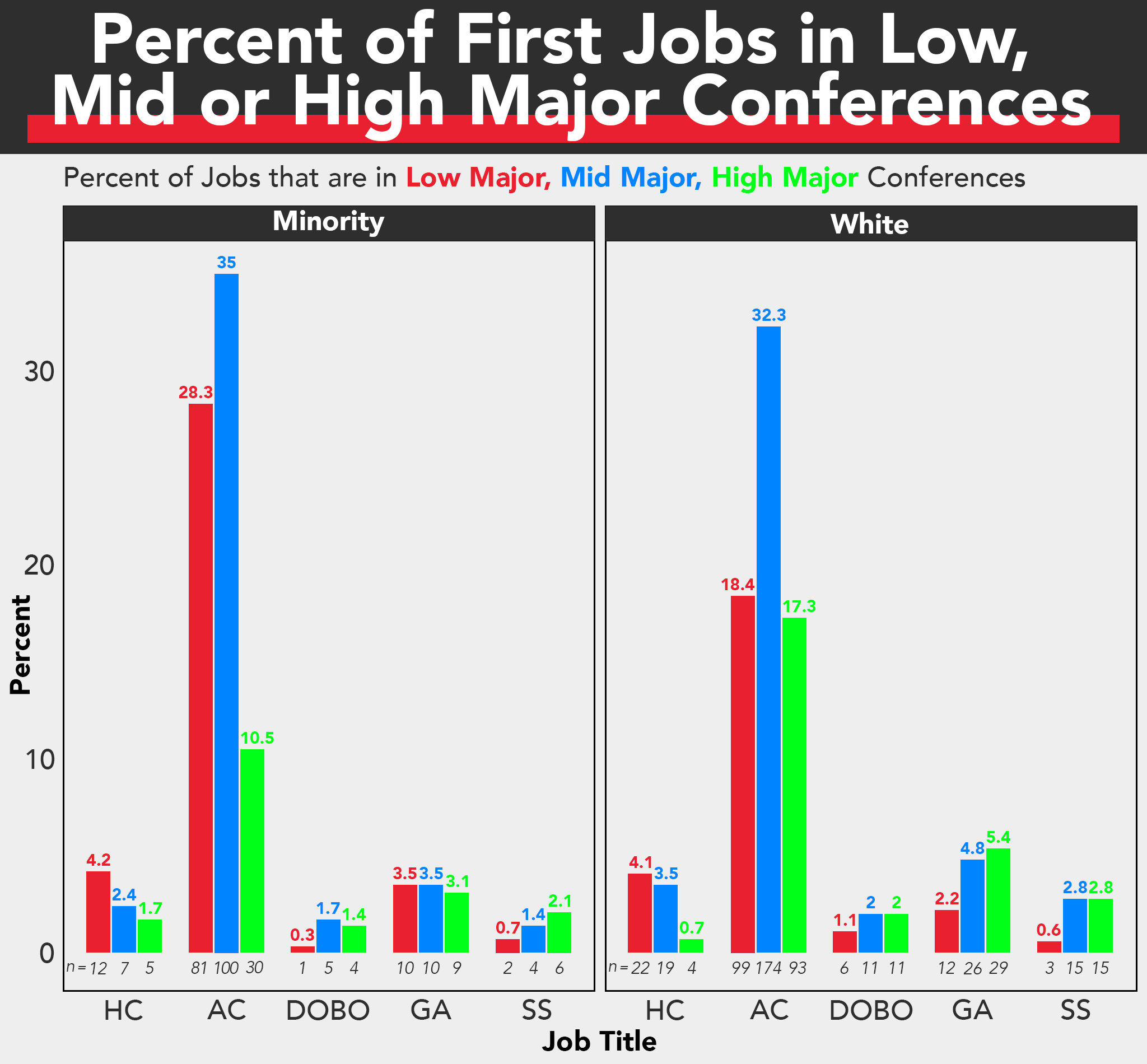 Shifting the focus away from first jobs and towards entire careers, Figure 3 shows the percentage of low, mid, and high major head coaching jobs taken throughout a coach’s career. 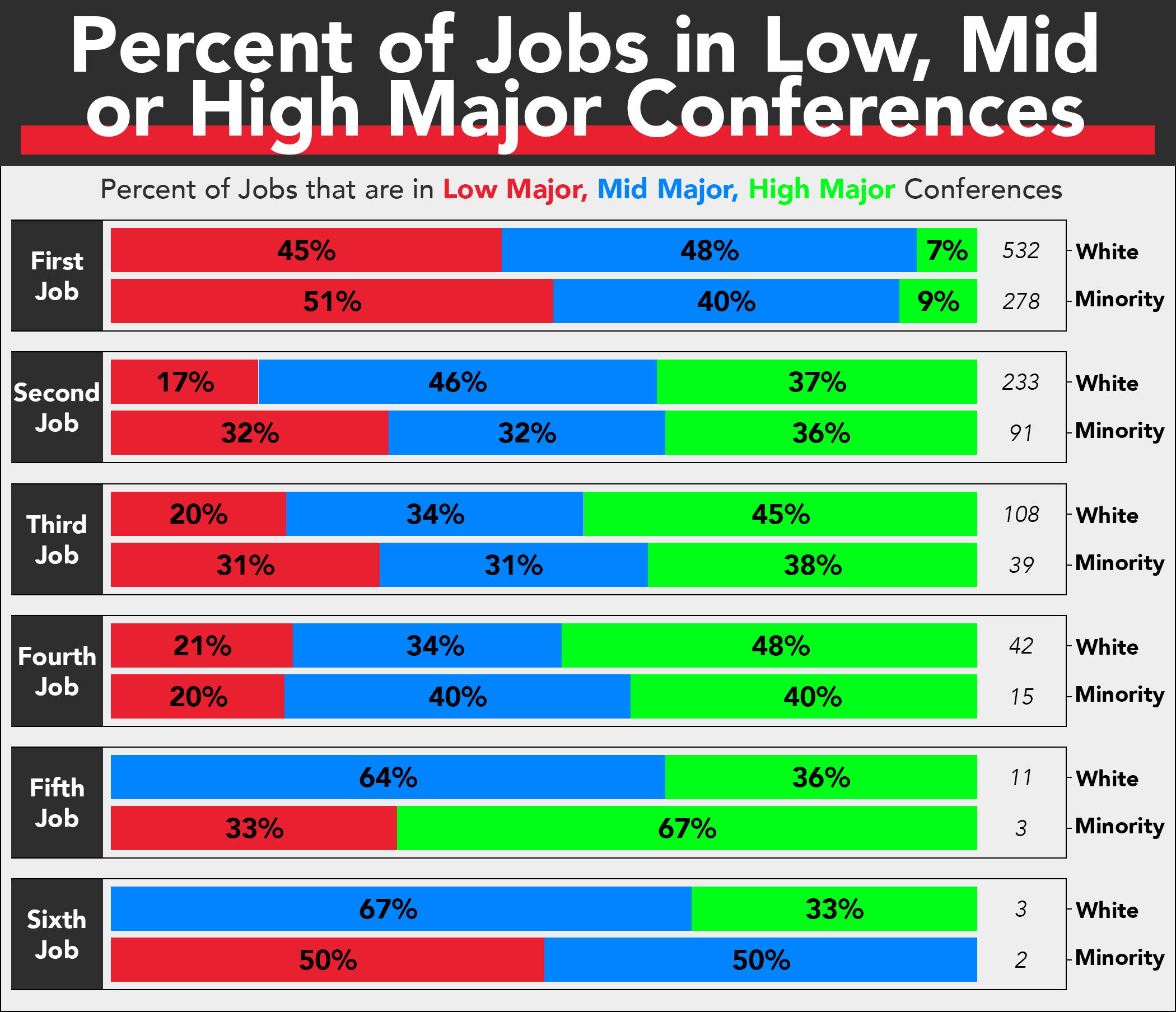 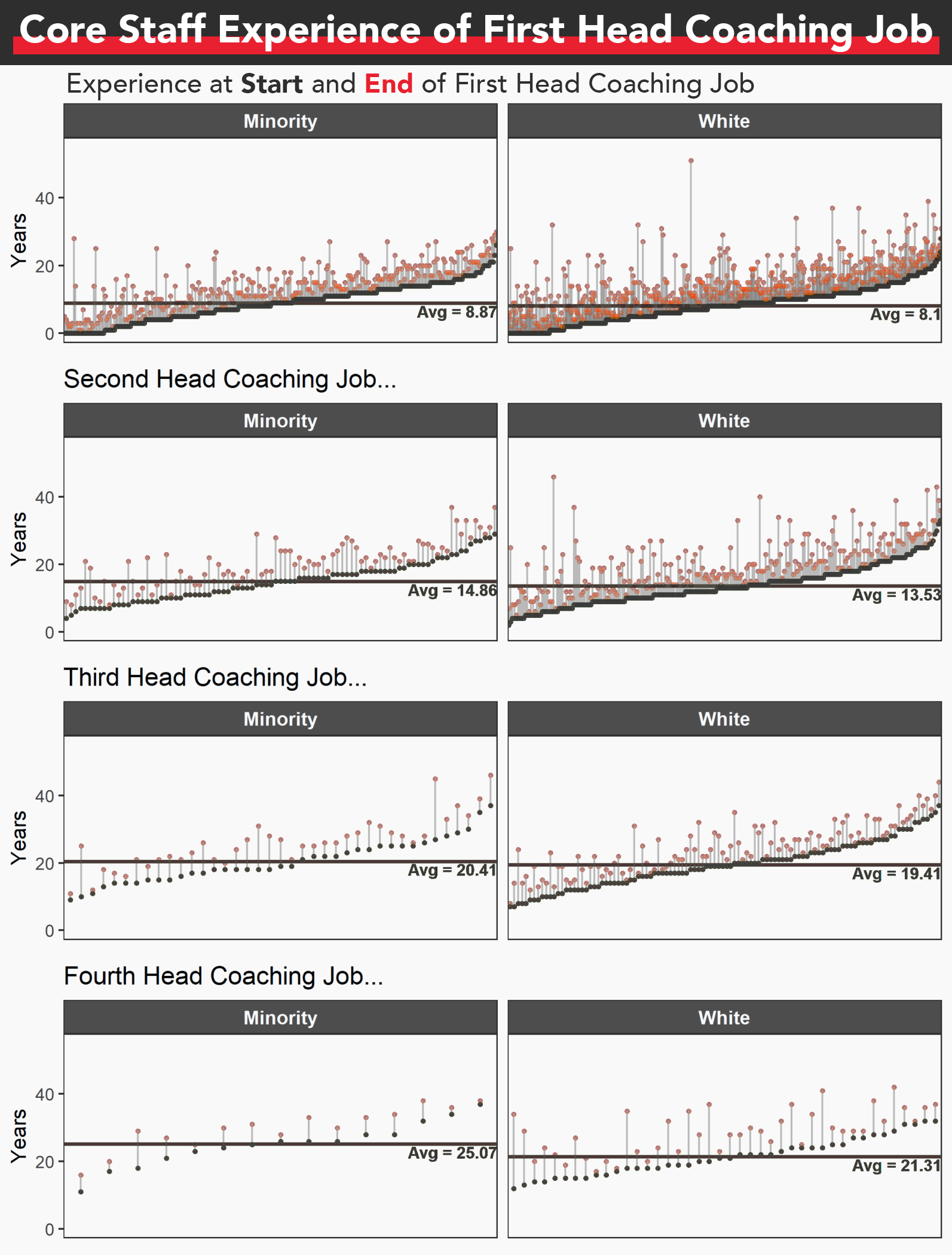 The natural follow-up question to this is to ask whether minority and white coaches stay in their head coaching jobs for the same amount of time. Looking at only head coaching jobs, Figure 5 shows how across an entire career minority coaches on average stay at their job for 5.26 years. Meanwhile, white coaches stay at their job for 6.32 years on average. 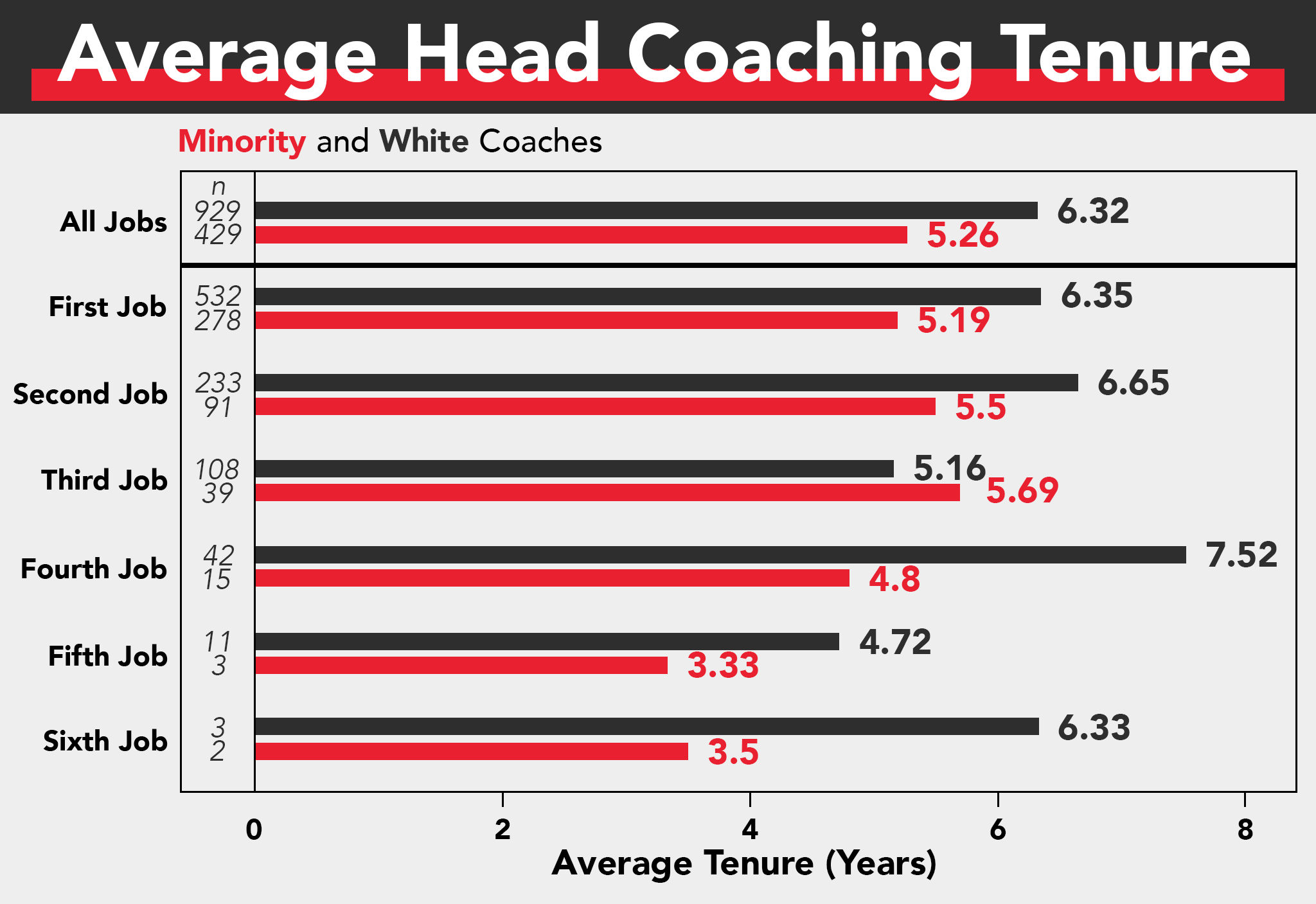 All of this can be put together to paint a clear picture of how career progression is different for minority and white coaches. There are many more minority players than white players, there are similar numbers of minority and white assistant coaches, but there are many more white head coaches than minority head coaches. Despite having similar first jobs at the D1 level, minority coaches tend to start at the low major level more often, and white head coaches are able to move up to higher conference levels more easily than their minority peers.

Minority coaches need more core staff experience prior to getting their first head coaching job, as compared to their white counterparts. That discrepancy maintains itself and gets more pronounced throughout a coach’s career. In addition, minority coaches have shorter head coaching tenures throughout their career than white coaches (a topic AthleticDirectorU has explored extensively in the past).

In spite of a huge population of minority basketball players at the D1 level, and an equitable number of minority vs. white assistant coaches, there is a clear discrepancy in how minority coaches are able to climb up to head coaching positions. In order to address these issues, it is necessary to develop programs guidelines and protocols – like the Collegiate Coaching Diversity Pledge – to ensure that minority coaches are given equal opportunity to advance their careers.

Leadership and administrators would do well to embrace change towards racial equity in the coaching ranks and see it for the opportunity that it is. Moving forward, hopefully there will be increased awareness with regards to hiring minority candidates. Establishing institutional norms with regards to what type of candidate a school, team, or coach is looking to hire, and being able to quickly identify and evaluate quality candidates who fit those criteria will be key when filling open positions once the coaching carousel starts spinning again – whenever that is.