The issue of player compensation in revenue generating college sports has taken center stage in policy debates surrounding college athletics.  Some have argued that increased compensation for college athletes will align the interest of the student athlete with institutional goals and could prevent scandals which damage the reputation of universities.  Others argue that compensating players would lead to unnecessary professionalization of amateur athletics, further blurring the distinctions between students who play sports for extracurricular benefit as opposed to those doing so as an occupation (Nocera 2016, Benedict and Keteyian 2013). A recent USA Today (Estes 2019) article examined the increase in recruiting budgets and spending from college football programs. In the last 5 years college football programs have increased their spending upwards of 300%. Athletic directors understand the importance of increasing budgets to compete with the best competition.

Institutionally, the revenue structure in many athletic conferences is designed to equalize revenues between member schools, which is similar to revenue sharing in professional sports. Revenue sharing is ever changing within conferences.  Compensation for athletes may differ substantially between conferences as opposed to within conferences as a result.  If this is true, it could be the case that all players within any conference have the same value since so much revenue is redistributed.  If player value is found to be heterogeneous despite conference institutional features such as revenue sharing, value could be tied to a variety of additional metrics as they are in most professional sports.

Determining player values in professional sports is inherently difficult.  Depending on the sport studied, detailed evidence of player performance is usually lacking.  For example, defensive players in football should be compensated based upon what does not occur, which can be difficult to measure accurately.  Extending such analysis to college sports is even more difficult as position specific valuations have no precedent and the majority of professional sports use salary caps, signing bonuses, and other labor union and league negotiated particulars which depart from traditional labor theories of wages.  There are no existing compensations schemes which could be applied to amateur sports in a straightforward fashion.  Similarly, new entrants into professional sports are compensated based on draft position and/or other criteria related to their expected future performance, which does not exist at the college level.

Theoretically, player value should not be uniform.  It would follow from a simple labor model that players should be paid their marginal revenue product of labor.  This would naturally vary by player and result in differences in compensation.  In sports, this is usually estimated with player specific metrics, although its applicability varies by sports.  In professional settings the value of the contract can be estimated related to the revenue or profit of a player based upon their performance.  In the absence of such information in college sports, we concentrate here on ex ante ratings of players and their relationship to revenue

With these ideas in mind, this paper seeks to estimate the value of college football players using their ex ante star rating determined before a player commits to a specific school.  This allows us to infer the values of both offensive and defensive players based upon their expected productivity as cardinally contained in their ratings as high school athletes. Furthermore, ex ante ratings are not biased by the presence or absence of player-specific statistics which could bias productivity estimates of players by position.  We are also able to exploit conference- and school-specific effects to estimate valuations using within-conference and within-school variation in recruit quality, team performance, and revenues, allowing more precise estimates of value which account for a variety of institutional revenue features.

Our results show that there is significant heterogeneity in player valuations by recruit rating.  Controlling for school heterogeneity (school fixed effects), we find that schools who recruit 5 or 4 star rated recruits can increase total revenue by over $500,000. Schools like USC, Ohio State and Alabama, who on average bring in several highly rated recruits per recruiting class, will bring in millions of dollars more in revenue per incoming class.   Overall, we find a high degree of variability in profit by ex ante recruit rating, consistent with the concept that players of higher quality should be better compensated than players of lesser quality.  Institutionally, the results show that revenue sharing among conferences does not lead to a weak relationship between player ratings and revenues.

We use recruit data from Rivals.com for ex ante recruit quality.  This data records the rating of each specific recruit for each year over the sample period (2002-2012). The recruit ranking data is an ex-ante consensus evaluation as recorded by Rivals.com where five-star is the best possible rating. It is important to note that ratings are cardinal ratings—a five star recruit in any year is a five star recruit in every year.  Players are not ordinal ranked by recruiting season.

We then compiled data from the Office of Postsecondary Education (OPE) Equity in Athletic Disclosure website.  This source lists school reported total revenue, for football for each school from 2002-2013. Beginning with the formation of the College Football Playoff and the creation of conference television networks, revenue for conferences changes discontinuously and we therefore restrict attention to years in which the revenue was predicated on conference-specific agreements with television and bowl games.  Total revenue consists of all intercollegiate athletic activities pertaining to that sport. This includes appearance guarantees and options, contributions from alumni, royalties, sponsorships, sport camps, tickets, student activity fees, and government support.

The SEC on average brings in the highest amount of five stars per recruiting class and has the highest average recruit quality. During the time frame we studied, an SEC team won the national championship 8 out of the 11 years.

The financial summary statistics are given in Table 2. The average annual total revenue for an FBS football program is more than $20 million. The highest grossing conferences are the Big Ten and SEC with each conference team on average bringing over $35 million in revenue. While the average school sees a profit of over $8 million, those in the SEC and Big Ten have close to $20 million in football profit annually.

In the second step, we estimate the effect of performance wins and bowl appearances on total revenue.  From the results of the first regression we obtain estimates of the effect of recruit quality on performance.  These are then used to infer values through their relationship with the financial variables in the second regression.

5.1 Effect of Recruit Quality on the Team Performance

For postseason success, we are mindful of the fact that teams are compensated for appearances and do not receive additional payments for winning (although winning may lead to other revenue for the athletics department).  We therefore analyze the relationship between the probability of postseason success and recruit quality in Table 5.  There, we see that the school fixed effects have a larger impact than their probit equivalent (Columns 2, 5, 8, and 11). We also see that higher rated recruits have larger impact on Bowl Appearances and Premier bowl appearances when we control for conferences compared to the probit regressions.  For example, a five star recruit increases the probability of appearing in a BCS bowl by more than 4% with school fixed effects, where the overall marginal effect is less than 2%.  Importantly, five star recruits have no statistically significant effect on the likelihood of appearing in a bowl game overall.   From these results, we can conclude that higher rated recruits have a significant impact on performance and the likelihood of appearances in the most lucrative postseason bowls.

To analyze the effect of team performance on financial outcomes, we begin with the OLS and fixed effects regressions of total revenue on team performance. We regress total revenue on wins, bowl appearance, and BCS bowl appearance in Table 6. (In appendix results we also included a specification which included premier bowls- Capital One Bowl, Tangerine Bowl, Cotton Bowl, Gator Bowl or Outback Bowl. These bowls have lucrative payouts and traditionally select teams near the top of their respective conferences.)  The OLS regressions show us that each win increases revenue by more than $800k.  The result is slightly larger when conference fixed effects are included (Column 2).  BCS bowl appearances are the most lucrative and increase revenues by more than $15 million across all schools, but by more than $8 million with conference fixed effects.

The results support the notion that higher rated recruits bring higher amounts of revenue for colleges At the same time, however, the results show that the estimates for player value are quite sensitive to whether conference or school effects are included in the estimation.  This is consistent with the notion that the institutional features of college football, where revenue is shared between conference members, plays a role.  It is also consistent with the notion that factoring the traditional performance of schools alters the value of any individual player to a program. 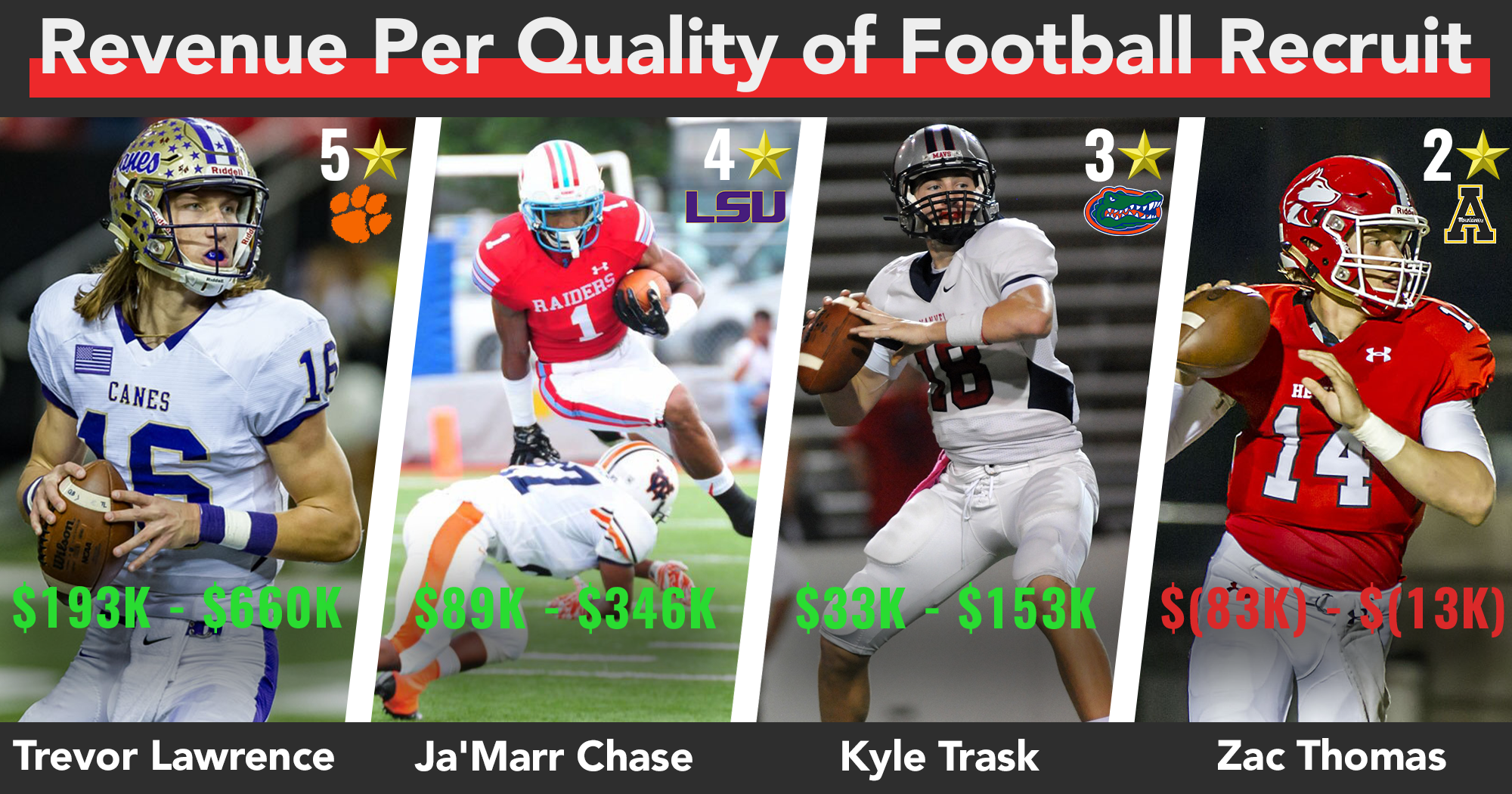 Find the full paper from Bergman and Logan here.