For the first time in college basketball history, a program eclipsed the $1-million mark in reported recruiting expenses in a single fiscal year. During the 2019 fiscal year, Kentucky spent $1,073,985 on men’s basketball recruiting, according to the university’s NCAA Financial Report.

Based on past NCAA Financial Reports compiled by AthleticDirectorU, college football saw its first $1 million spenders on recruiting in 2012 and the sport’s top spenders are creeping towards $4 million annually, but Kentucky spent more on men’s basketball recruiting last year than 36 public Power Five universities spent on football recruiting, including Ohio State football ($1.06M).

For reference, the $1.07 million that Kentucky spent on men’s basketball recruiting last year could fund roughly 13 years of recruiting for Wisconsin, based on the Badgers’ 2019 recruiting expenses of $81,503.

During the 2018 fiscal year, Indiana was the only school among the public power conference schools examined that spent more on basketball recruiting than football recruiting.

During the 2019 fiscal year, 42 of the 56 public schools examined that compete in the AAC, ACC, Big 12, Big Ten, Pac-12 and SEC spent more on men’s basketball recruiting than they had in 2018. On average, those 56 schools spent $57,333 more on recruiting per school than they had during the previous recruiting cycle, continuing an upwards trend in the investment on the recruiting trail.

Recruiting expenses, as defined by the NCAA Financial Report forms that schools fill out annually, “input transportation, lodging and meals for prospective student-athletes and institutional personnel on official and unofficial visits, telephone call charges, postage and such. Include value of use of institution’s own vehicles or airplanes as well as in-kind value of loaned or contributed transportation.”

Here are the complete rankings of public high-major conference schools based on their spending on recruiting during the 2019 fiscal year (last year’s ranking among high-major schools in parentheses):

Here are the seven high-major conferences, based on the average spending on men’s basketball recruiting in 2019 by the public schools examined for each conference: 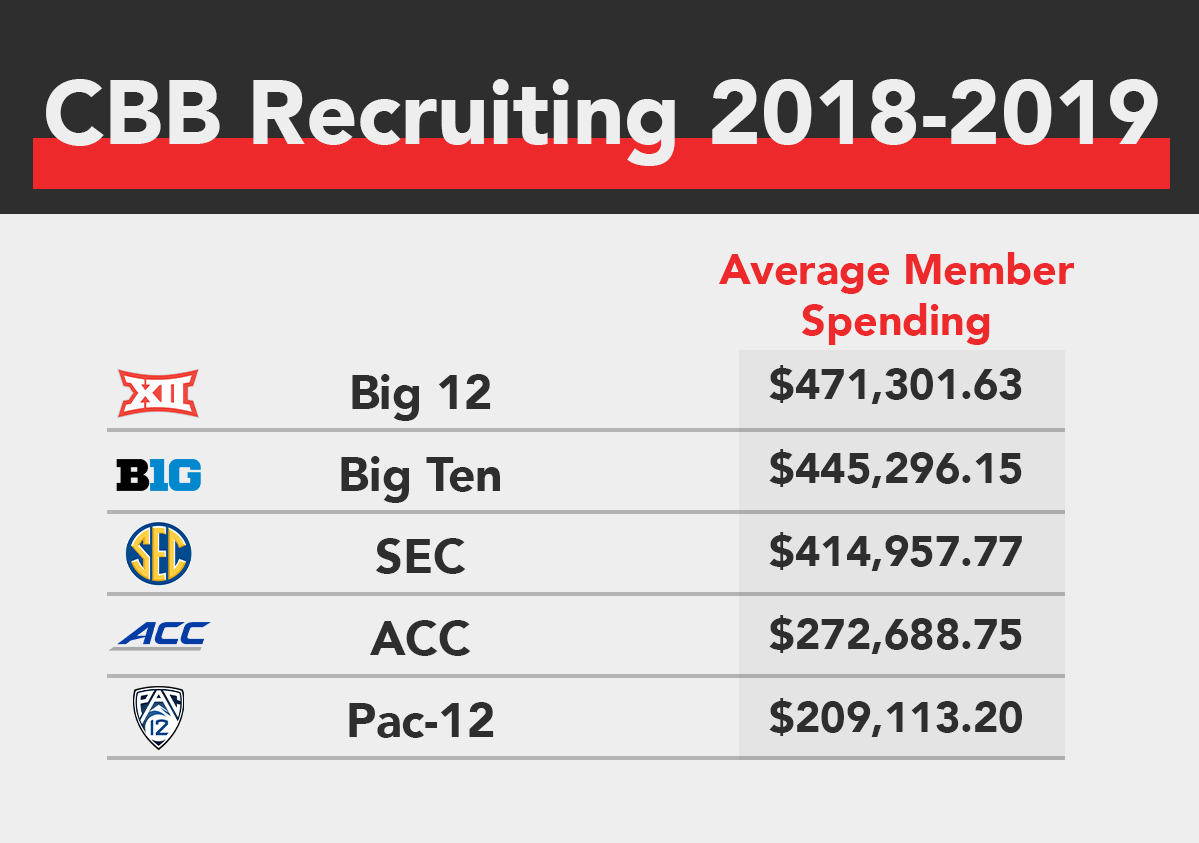 The following schools saw the biggest increases in gross spending from 2018 to 2019: 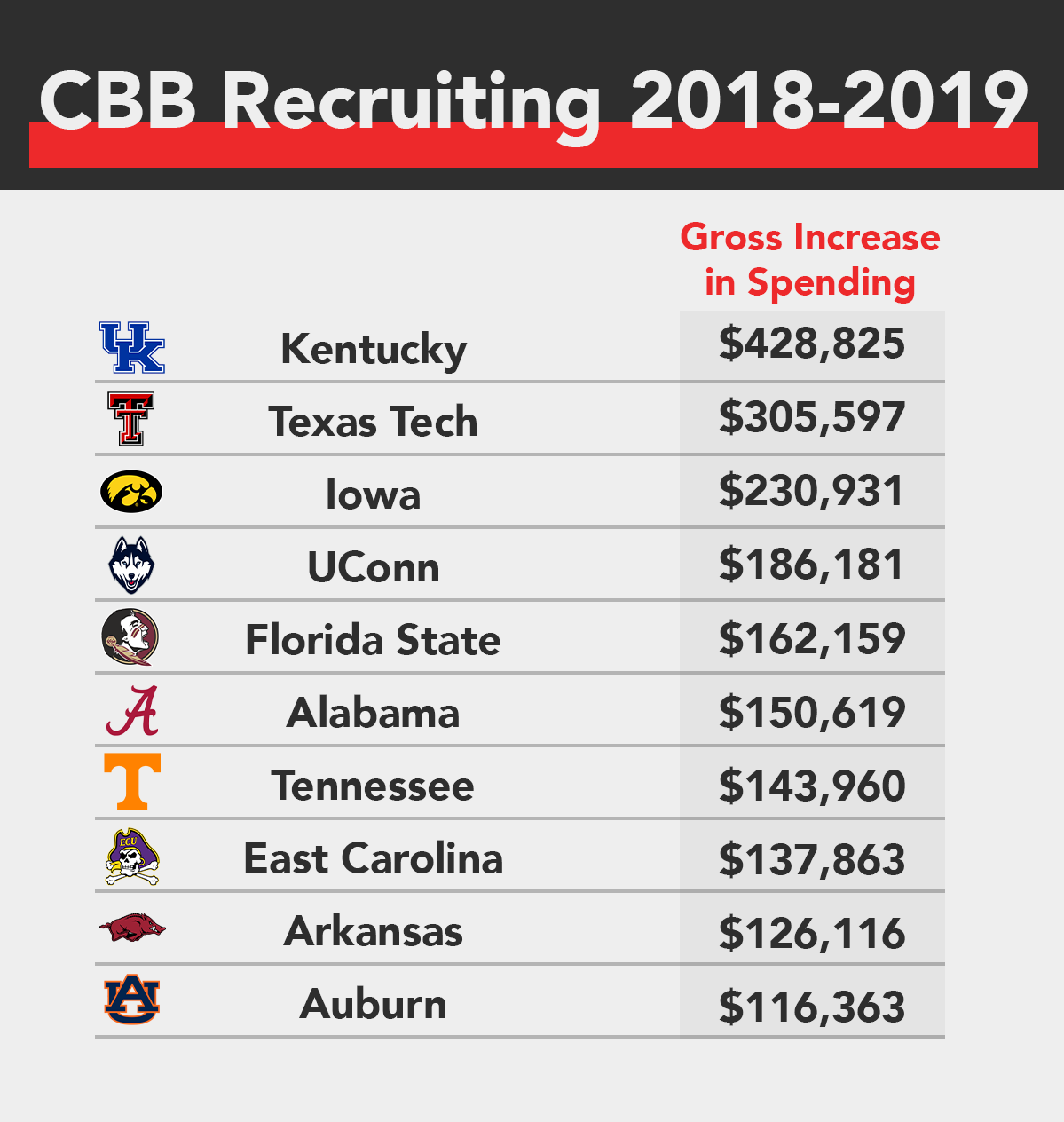 The following schools saw the biggest year-over-year increases based on percentage of spending increases: 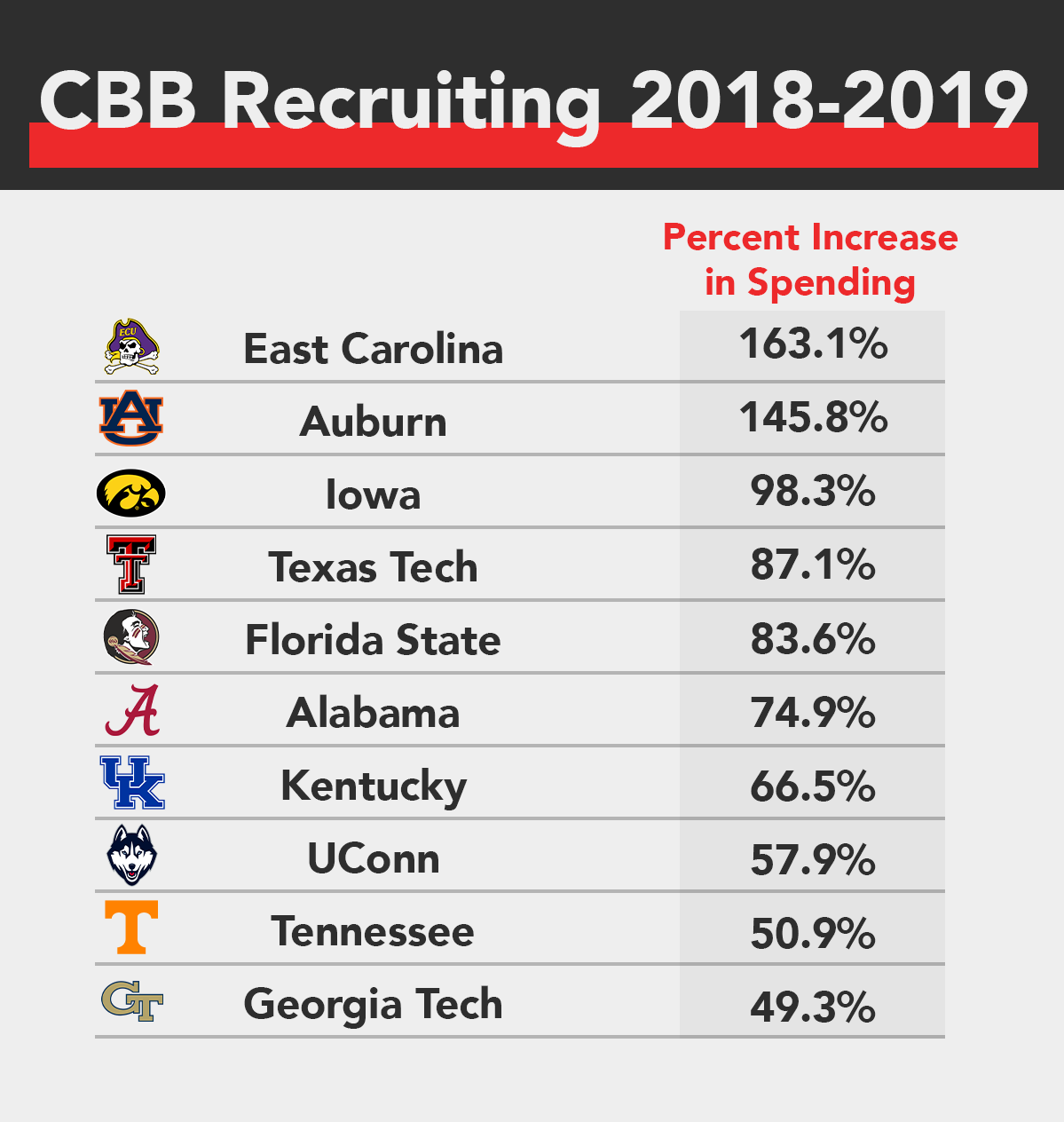 Kentucky men’s basketball is similar to programs that contend for the College Football Playoff in that it already makes one of the most significant financial investments into recruiting and consistently lands 5-star recruits and nationally ranked classes, but it’s also increasing its investment into recruiting more than any other program.

Kentucky spent the third-most among public high-major schools on recruiting during the 2018 fiscal year, yet it spent almost $430,000 more on recruiting in 2019 than it did in 2018 – the biggest year-over-year increase in the country.

Somewhat similarly, Texas Tech ranked second last fiscal year in year-over-year increase in recruiting expenses. The Red Raiders haven’t recruited at the level of the Wildcats but given their finishes in the last two NCAA tournaments – a national runner-up finish in 2019 and an Elite Eight appearance in 2018 – they’re operating at an incredibly high level.

Auburn ranks in the top 10 in both gross, year-over-year increase in recruiting expenses and percentage increase but that can be explained by the Tigers’ six-month, self-imposed recruiting ban from September 2017 to April 2018 following former assistant coach Chuck Person’s involvement in the federal investigation into college basketball. Auburn spent just $79,837 on men’s basketball recruiting in the 2018 fiscal year as a result, which makes its $196,000 investment into recruiting in 2019 appear to be a huge jump.

How have men’s basketball recruiting expenses changed over the years? The graphic below shows the top 10 spenders annually over the last 15 years.