Why Congress Should Regulate Salaries and Spending in College Athletics

This article outlines the benefits that would accrue to college athletics if lawmakers also developed federal legislation to limit excessive spending on salaries[1] and facilities (i.e., “competitive spending”).

Enacting spending caps has been discussed before and is often thought to be controversial, based on the common belief that such an action would run afoul of American free-market ideals and antitrust law. However, spending on salaries and extravagant facilities continues to escalate disproportionately – even as questions about student-athlete compensation and the integrity of the collegiate model grow louder – and now is perhaps the appropriate time for Congress to also consider expense control legislation.

This article makes three main points. First, it proposes that the existing salary market in major college sports is inefficient, resulting in salaries that are inflated beyond what would reasonably constitute market value in a for-profit environment. This inflationary effect is driven by the complex incentives confronting athletics directors and presidents in the unique non-profit economic system of college athletics, which, unlike any other sector of the American economy, features fierce zero-sum competition among non-profit organizations.[2]

Second, it describes how limits on spending would improve college athletics for student-athletes and fans by reducing the pressure on schools to generate incremental revenue. The revenue-maximizing tradeoffs that currently affect student-athletes and fans – such as inconveniently scheduled late night or midweek games that impact academics, and six-day TV selection windows for kickoff times – would occur much less often if spending restrictions were in place, since revenue generated above the spending limit couldn’t be used for competitive purposes.[3]

And third, it suggests that limits on spending would increase competitive balance in college athletics, thereby protecting long-term fan interest and commercial value. Spending limits (structured appropriately for each level of DI competition) would be in the competitive interest of all schools except the small minority who currently generate the most revenue, and thus ought to be supported by a majority of institutions and their fan bases.

This article concludes by considering beneficial uses for the financial surpluses that are created by limiting excessive spending, such as redirecting funds towards student-athlete welfare priorities or non-athlete undergraduate financial aid. Caveats and additional complexities are also discussed.

The goal of this piece is to invite further thought about the benefits of federal policy to address excessive spending on salaries and facilities in college sports. It does not propose detailed mechanics for how expense control structures such as a salary cap or luxury tax would operate, nor does it speculate about specific limitations (e.g., at what dollar amount should spending be capped for Power Five compared to FCS?), preferring to leave this work for subsequent detailed analysis.

The salary market in college sports is inefficient

Accordingly, rather than seeking profitable operating margins, non-profit athletics departments reinvest all available revenue in priorities that maximize the chance of competitive success – such as attracting and retaining the best coaches. So, when athletics-related revenue grows significantly, as has been the case in major college sports over the past decade, the non-profit nature of its economic system drives corresponding growth in salaries and other competitive spending.

Salary market inefficiency is especially apparent when athletics directors and presidents find themselves renegotiating contracts to retain successful coaches. The non-profit structure creates an odd principal-agent dilemma: It is almost always in the personal job-security interest of athletics directors to pay highly popular coaches whatever it takes to retain them, lest they be blamed by influential constituents for allowing a beloved coach to get away. Agents representing coaches understand this negotiating dynamic, and are thus able to extract exceptional value for their clients. Negotiating circumstances are different in professional sports, where management is closely supported by an owner with a personal incentive to optimize financial efficiency and maximize return on investment. 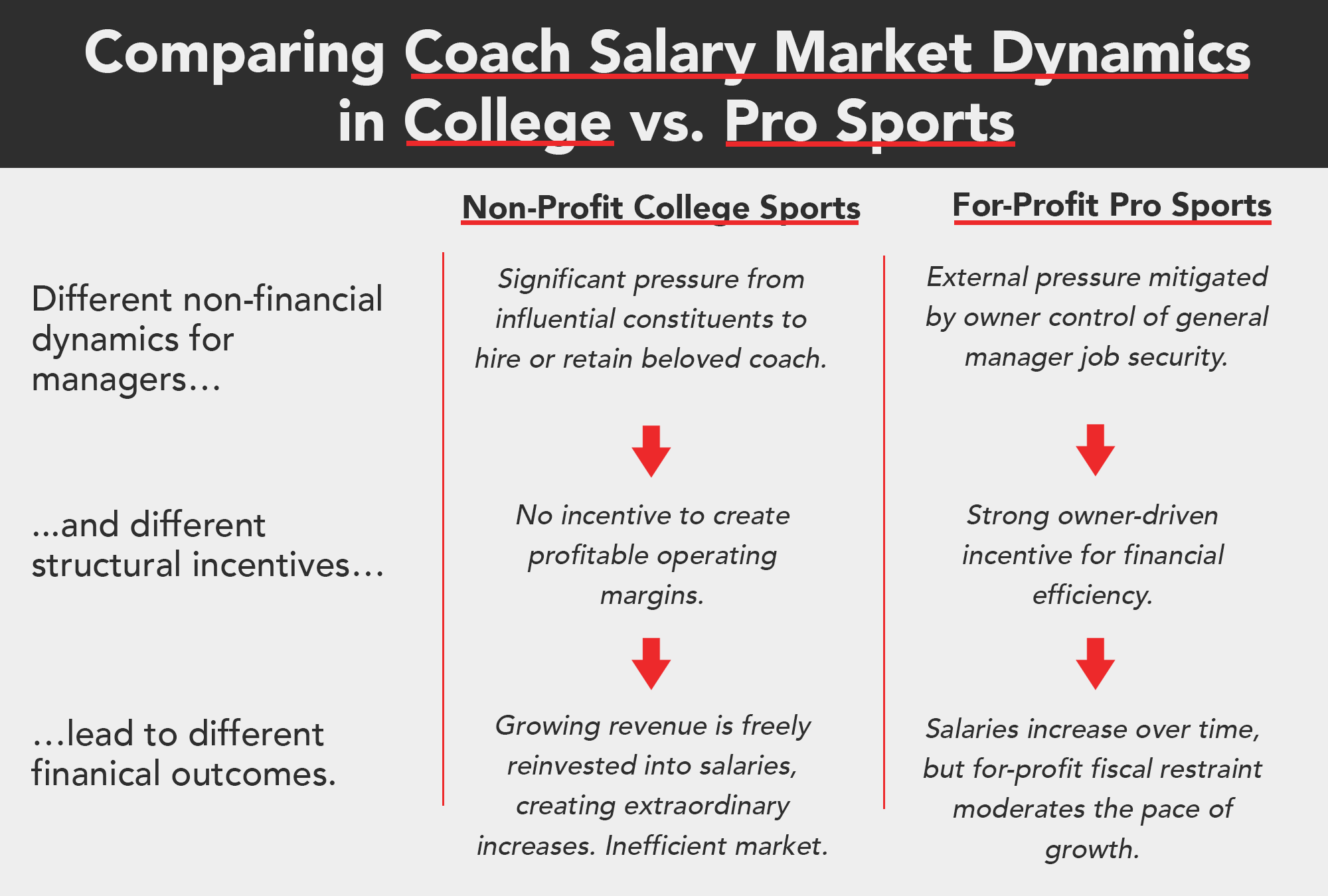 College coaching salaries have indeed grown extraordinarily, faster relative to revenue growth than professional head coaching salaries[4], and are likely inflated beyond their would-be market values if a profit-seeking motive encouraged fiscal restraint. In fact, the market-failure concern about potential booster involvement in name, image, and likeness compensation for student-athletes – i.e., that idiosyncratic motivations of payers would drive unmerited above-market compensation for recipients – already exists to some degree in the salary market for college coaches.

The coaching salary market in college athletics operates less efficiently than in professional sports, other non-profit sectors, and for-profit business. Regulations to limit excessive spending on salaries would compensate for these inefficiencies.

Another feature of the economic system in college sports is that all incremental revenue is competitively important (i.e., all marginal revenue has “utility”). For example, an additional dollar earned by a wealthy school extends its resource advantage and an incremental dollar earned by a less wealthy school closes a disadvantageous resource gap. All athletics departments and their conferences are thus very focused on increasing revenue, and employ a number of strategies in doing so.

However, some revenue-generating strategies come with challenging tradeoffs that we are becoming increasingly sensitive to. For example, while media rights revenue is maximized by granting broadcast partners more scheduling flexibility, challenges arise for student-athletes and ticketholders when games are scheduled at odd times or on short notice.

Conferences like the PAC-12 are navigating a challenging dilemma. Schools in the league seek more revenue to keep pace nationally, but also express that they are impacted by night games, short-notice of kickoff selections, and other conditions necessary to optimize media rights income.

Nationally enforced limits on competitive spending could help to resolve some of these problems. They would reduce the urgency to generate maximum revenue, since income above the spending limit couldn’t be used for competitive purposes, and thus enable schools to cut back on the number of revenue-maximizing tradeoffs that impact student-athletes and local fans. 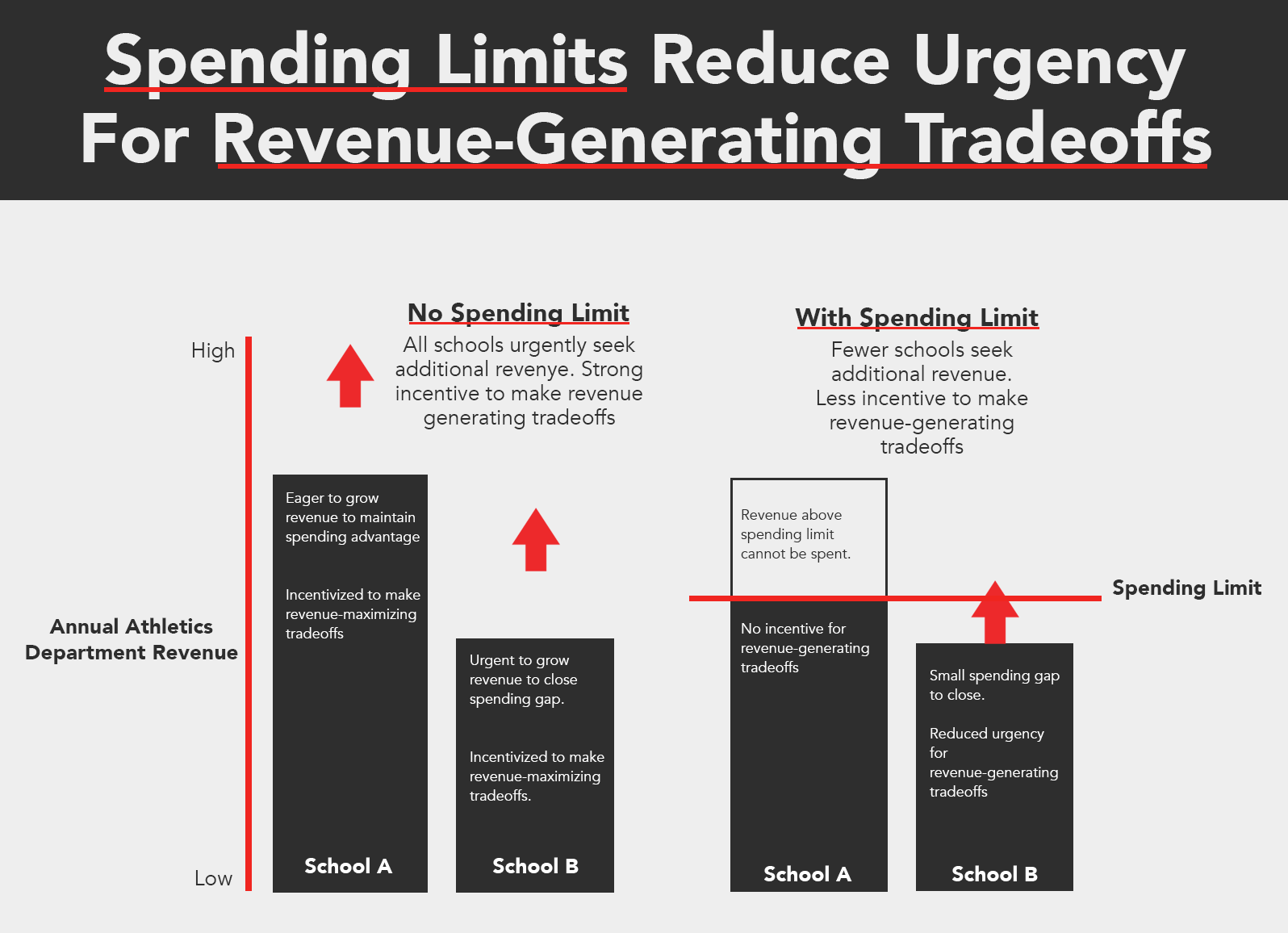 The highest revenue earners in major college sports spend budgets that are considerably larger than median or low revenue earners at the same competitive level. For example, in 2017, expenditures at the University of Texas were $217M, more than double the median for schools in the ACC, Big-12, or Pac-12.[5]

Reasonable limits on competitive spending (i.e., set differently for Power Five, other FBS, and FCS – or some other tiered structure that also accounts for basketball characteristics) would thus be in the competitive interest of all schools except the small number at each level who generate the most revenue. Accordingly, the effects of spending limits should also be welcomed by fans eager to see competition for championships – and coaching talent – occur on a more level financial playing field.

The increased competitive parity would also protect the long-term commercial value of college sports. Owners in for-profit professional sports understand how balance-seeking policies such as reverse-finish draft ordering and player salary caps help to sustain value for the league and its teams. Spending limits in college sports would have a similarly positive effect, preserving long-term commercial health by ensuring championships are not monopolized by a small group of exceptionally well-resourced schools.

Surpluses can be reinvested to directly help students

Limits on competitive spending would prevent schools from using surplus income to fuel additional growth in salaries and extravagant facilities. Instead, this newly available money could be mandatorily redirected to fund meaningful but non-competitive educational benefits for student-athletes, such as postgraduate career development opportunities, or even to support the creation of new teams.

Additionally, at some exceptionally high-revenue schools, an even greater athletics department surplus would be available to share with main campus for various academic or non-athlete financial aid uses. At other schools, financial breathing room can provide a margin of safety for the sustainability of existing programs and help reduce dependence on campus funding.

There are a number of related issues that must be contemplated further. First is that restricting spending does not directly address the issue of compensation for student-athletes. Even if the amount of money flowing through to salaries and facilities is curtailed, many would contend that student-athletes who participate in high-revenue sports should receive an increased share of a significantly-sized revenue pie.

Additionally, as previously mentioned, designing a fair and effective spending control system requires extensive further analysis. Differences between schools in cost of living, competitive level, legitimate facility needs, construction costs, number of sports, and many other complicating factors need to be considered. Accounting for these details presents a significant challenge, but one that is similar in complexity to the highly nuanced work that already takes place in compliance, eligibility, and financial aid.

Finally, a structural change of this nature would occasionally create tensions between personal interests, the interests of schools, and what is best for the national system of college athletics. Hopefully, courageous leaders who are able to negotiate these tensions will continue to emerge.

The passage into law of California’s SB206, only fifteen miles from our campus at UC Davis, and the rise of similar legislative proposals around the country have intensified questions about whether student-athletes are fairly compensated. In response, a working group of Senators is analyzing the issue of student-athlete economic rights and exploring a national framework for name, image, and likeness compensation.

Kevin Blue, Ph.D., (kblue@ucdavis.edu) is in his fourth year as the Director of Athletics at UC Davis. During his tenure, the Aggies have achieved numerous competitive milestones, including NCAA Tournament appearances in men’s basketball, women’s basketball, and football. UC Davis Athletics also set fundraising records in each of the three most recent fiscal years, added two new varsity sports, and recorded all-time high APR and GSR marks. Blue was previously Senior Associate Athletics Director at Stanford. Other AthleticDirectorU content by Blue includes “Rising Expenses in College Athletics and the Non-Profit Paradox” (2019), “Real Opportunities, Not Just Degrees” (2018), “Case Study: Football Attendance and Revenue” (2018), and “The Millennial AD” (2017).

[1] For the purposes of this article, the salaries being referred to are the exceptionally high salaries paid to “major sport” coaches and some administrators.

[2] Please see “Rising Expenses in College Athletics and the Non-Profit Paradox” for a detailed review of the economic system of college athletics. (https://www.athleticdirectoru.com/articles/kevin-blue-rising-expenses-in-college-athletics-and-the-non-profit-paradox/)

[3] In economic terms, marginal revenue above the spending limit would no longer have competitive utility.

[4] The median Power Five head football coach salary grew by 87% from 2010-2017. Median Power Five athletic department revenue increased 58% during this period. Media reports suggest that NFL head coach salaries grew by approximately 50% during the same period, while NFL revenue grew 70%. NBA revenue increased by over 90% from 2010-2017, but head coaching salaries are estimated to have grown less than 40% during this period. Salary information was gathered from USA Today database and other publicly available sources. Analysis included public school data only, unless private school coaching salary information appeared on the Form 990. Revenue data was gathered from EADA reports and Knight Commission College Athletics Financial Database.