The Influence Of Search Firms In Men’s Basketball Hiring

Executive search firms have established themselves within the world of college basketball in recent years. These firms, which are tasked with helping find new head coaches, can have a lasting impact on the health of a Division-I basketball program.

Over the past nine NCAA Division I men’s basketball off-seasons, 36.7 percent of head coaching vacancies have been assisted by search firms. Among those hires include: Ohio State’s Chris Holtmann, Oregon’s Dana Altman, Texas Tech’s Chris Beard, NC State’s Kevin Keatts, and Oklahoma’s Lon Kruger, among others. 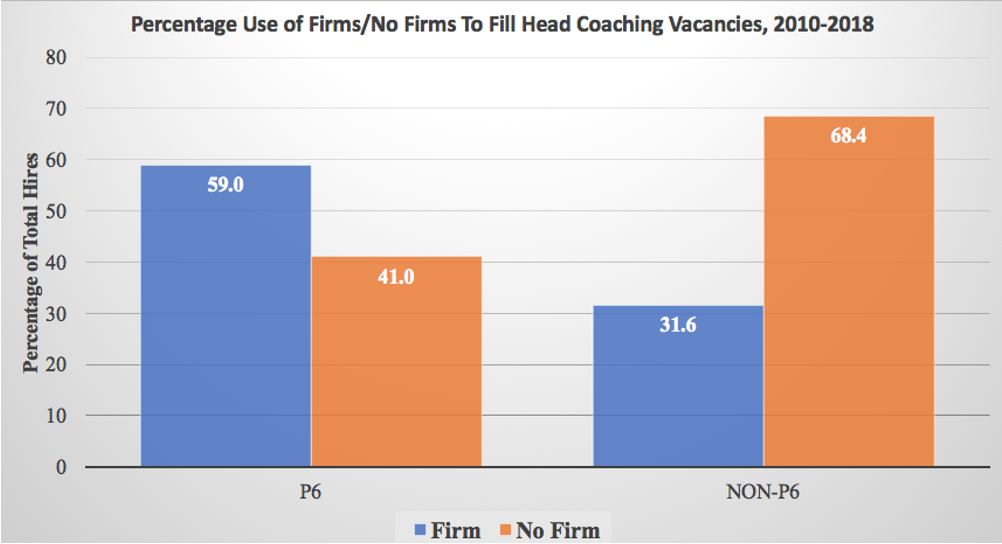 Since 2010, 59 percent of Power-Six programs have used search firms while 31.6 percent of non-Power-Six programs have used search firms. In large part, we can assume the difference is mostly due to budgeting conflicts, as larger universities tend to have more financial flexibility than the smaller universities. The search firms researched charge between $20,000 to as much as $150,000 for a men’s basketball search, although the median price usually falls in the mid-five figure range.

The fundamental question we set out to answer when conducting this research was whether hiring a search firm results in a significant payoff to the university. Using our Power-Six vs. non-Power-Six model once more, we have found that head coaching tenures tend to be slightly more successful when the head coaching vacancy was assisted by a search firm.

Through our research we have found that firm and non-firm hires have had varying measures of success based on the hired head coaches’ previous positions. The table below indicates the average tenure winning percentage based on whether the head coach was hired through a firm or without one, and also the most recent coaching position of the hired head coach.

The table below shows the frequency of head coaching hires based on previous coaching position and whether the coach was hired through a search firm.

Though programs develop relationships with search firms, it should be noted that only 19.6 percent of the time a program hires the same search firm in consecutive head coaching hires. In recent years, this has included Oklahoma State, Tennessee, and Texas Tech among high-major programs.

The flowchart below displays how programs have progressed through multiple coaching changes, based on search firm involvement, over the previous nine off-seasons.

Texas Tech is one of the more peculiar examples in recent years in the discussions of search firms in college basketball. In 2011 and 2012, Texas Tech did not hire a search firm when it welcomed Billy Gillespie and Chris Walker, respectively, to the university. Gillespie and Walker logged a combined 19-43 win-loss record over two seasons.

The university then brought on Fogler Consulting in 2013 to help land Tubby Smith, who later guided the Red Raiders to its first NCAA Tournament appearance in nearly a decade. After Smith left for Memphis, Texas Tech again retained Fogler Consulting for its the vacancy. Fogler linked Chris Beard, a well-traveled, longtime junior college coach, to take over the reigns of a Big XII program. In just two seasons, Beard guided Texas Tech to a No. 3 seed and led the team to the Elite Eight of the 2018 NCAA Tournament.

To conclude, our studies have indicated that there is tangible evidence that search firms have translated to success in D-I men’s basketball. Understanding the trends, successes, and failures of selecting or not selecting search firms can allow programs to gain an upper edge on their competition.