When Ursinus College (D3) hired Joe Jamison as its wrestling coach prior to the 2019-20 academic year, he was already thinking about how he could grow the sport by adding women.

“Wrestling has a long history of being inclusive and accessible, racially and by body type. We have weight classes for a variety of sizes,” he told me. “However, we were excluding half of humanity.”

Two female Ursinus students joined the wrestling team for the 2021-22 season, and, in December 2021, one competed in a match for the Bears and won. That helped spur decision makers to take action. On April 4, 2022, Ursinus officially added women’s wrestling as a varsity sport.

To be sure, Ursinus College was not the first university to sponsor a varsity women’s wrestling program. Seven other programs already existed in the Commonwealth of Pennsylvania. But, by adding the sport, Urinsus joined the ranks of universities offering the fastest growing intercollegiate varsity sport, outside of esports.

By my count, since March 2020, when the pandemic began, 40 varsity women’s wrestling programs have been added at four-year institutions, representing nearly eight percent of all new sports added. Only esports, with its 47 new programs, has been adopted with more frequency. 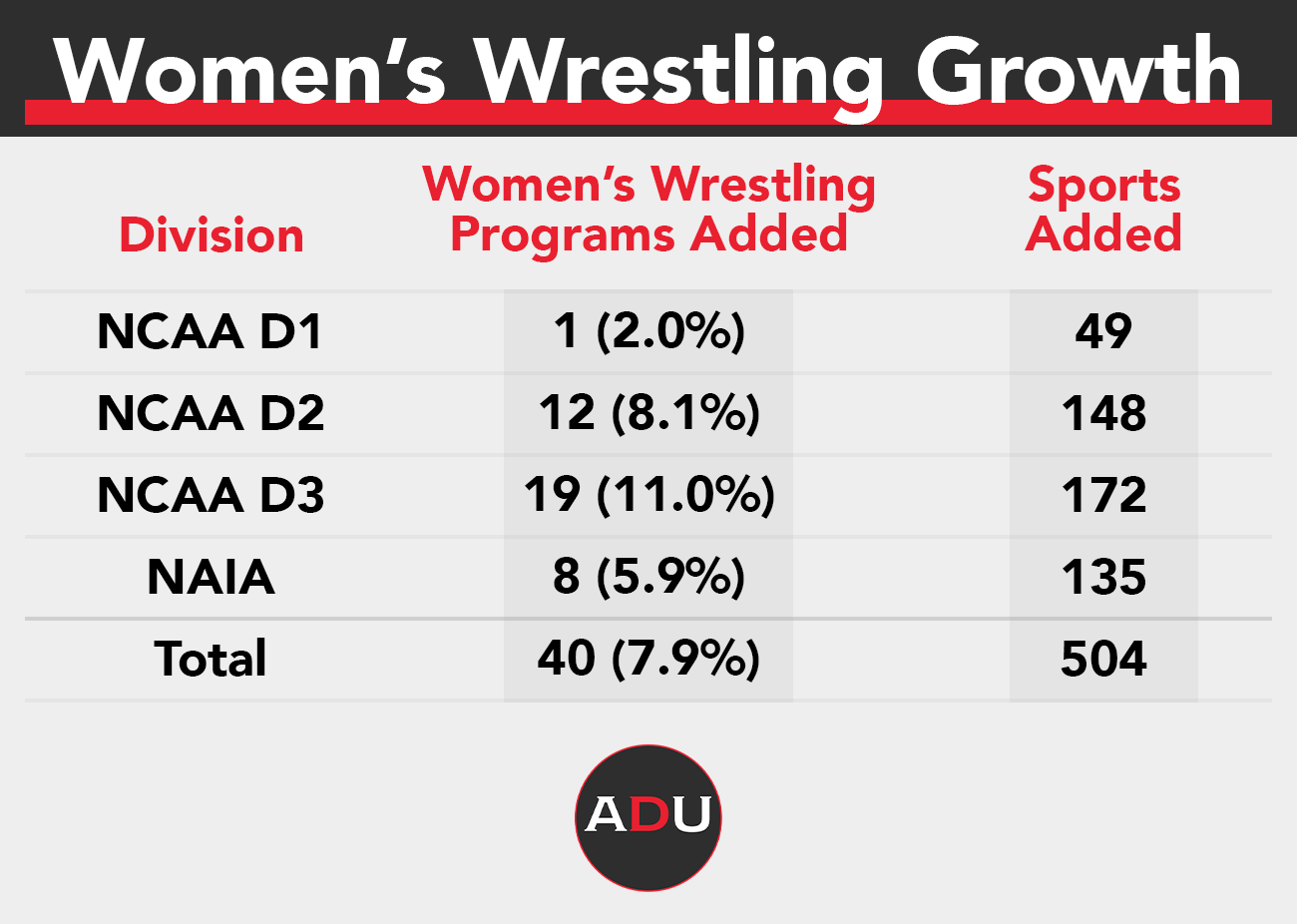 According to USA Wrestling, the national governing body for wrestling in the United States, roughly 120 collegiate programs exist. The 40 new programs would suggest a growth rate of 50 percent since pre-pandemic levels.

With one exception, the University of Iowa, all of the teams added in this time period have been at enrollment-driven schools such as Ursinus. This fact is not lost on the Bears’ athletic director Erin Stroble who explains the process at her school involved a proposal from athletics that gained approval from the enrollment staff, and, ultimately, the vice president group.

“This was an opportunity to support a new program without needing a brand new facility, at least right away,” Stroble said, noting that growing enrollment was, indeed, a benefit to the decision. Additionally, Stroble said, the school successfully engaged its alumni network to aid with fundraising to offset year one expenses.

Since the official announcement in April 2022, Ursinus now fields a roster of nine women, including four who had never wrestled before. Jamison pointed out they have had two women already apply for next year and have three official visits scheduled for October.

This growth has occurred despite Ursinus not yet hiring a head coach. Jamison has assumed a title of Director of Wrestling, and notes his schedule this year includes frequent men’s matches on Saturdays and women’s matches on Sunday.

USA Wrestling has been sponsoring national championships in women’s wrestling since the early 1990s. However, as USAW’s Executive Director Rich Bender told me, it was not until the governing body worked with the sport’s international federation to get on the Olympic programme in 2004 that the sport took off.

“We thought that was a really critical stamp of legitimacy on the sport,” Bender said, noting the role USAW now plays in encouraging opportunities for women at the intercollegiate level while growing enrollment.

As evidence of that, in 2010, USAW’s female membership numbered 3,800. That figure grew to 25,000 at the end of 2021, suggesting in some ways that the growth at the intercollegiate level has been slower to develop.

USAW works with the National Wrestling Coaches Association, Wrestle Like A Girl, and others to promote and encourage opportunities for female wrestling at all levels. While few NCAA Division I institutions have added women’s wrestling, Bender is not deterred by the lack of penetration at that level.

“We think it is critical for us to secure opportunities for women to compete and represent Power Five schools at the highest level of college athletics,” Bender said. “It is most important to provide opportunity. And we want to ensure every female in America who wants to wrestle in college has that opportunity.”

Even with the recent growth, Bender believes universities can still help fill a void by adding a women’s program. “There is a pool of athletes (seeking a chance to wrestle in a college). There is some truth to that, ‘Build it and they will come.’ They are starving for these kinds of opportunities,” he said.

You can watch my full interview with Bender on Collegiate Sport Connect.