When Jon Wilner of the San Jose Mercury-News floated the idea last month that the Pac-12 should consider moving some of its football games to 9:00 am Pacific time, I tweeted that I really liked the idea. My experience in a college town is that while fans may dislike the early kickoff times (11:00 am here in the Central time zone), area businesses generally benefit as fans are more likely to stay in town and patronize a bar or restaurant after the game.

Wilner’s idea represented creative, out of box thinking to solve the conference’s biggest challenge. “Pacific Time has been a problem for the Pac-12 since time immemorial, but the challenge becomes more daunting each season with the current television contracts, sports media cycles and consumer behavior,” Wilner wrote. Let’s not forget that in the pre-Board of Regents days, when the NCAA controlled television rights, most games started at the same time.

The idea caused me to wonder why don’t more fans watch Pac-12 games? The conference coverage area includes major media markets. Its members have storied traditions and rivalries. Since 1935 (the “Poll Era” of college football), one Pac-12 member, USC, has more national championships than any single Big 10 school. According to Drafthistory.com, USC has produced more NFL draft picks than any other school. So why don’t more people watch? 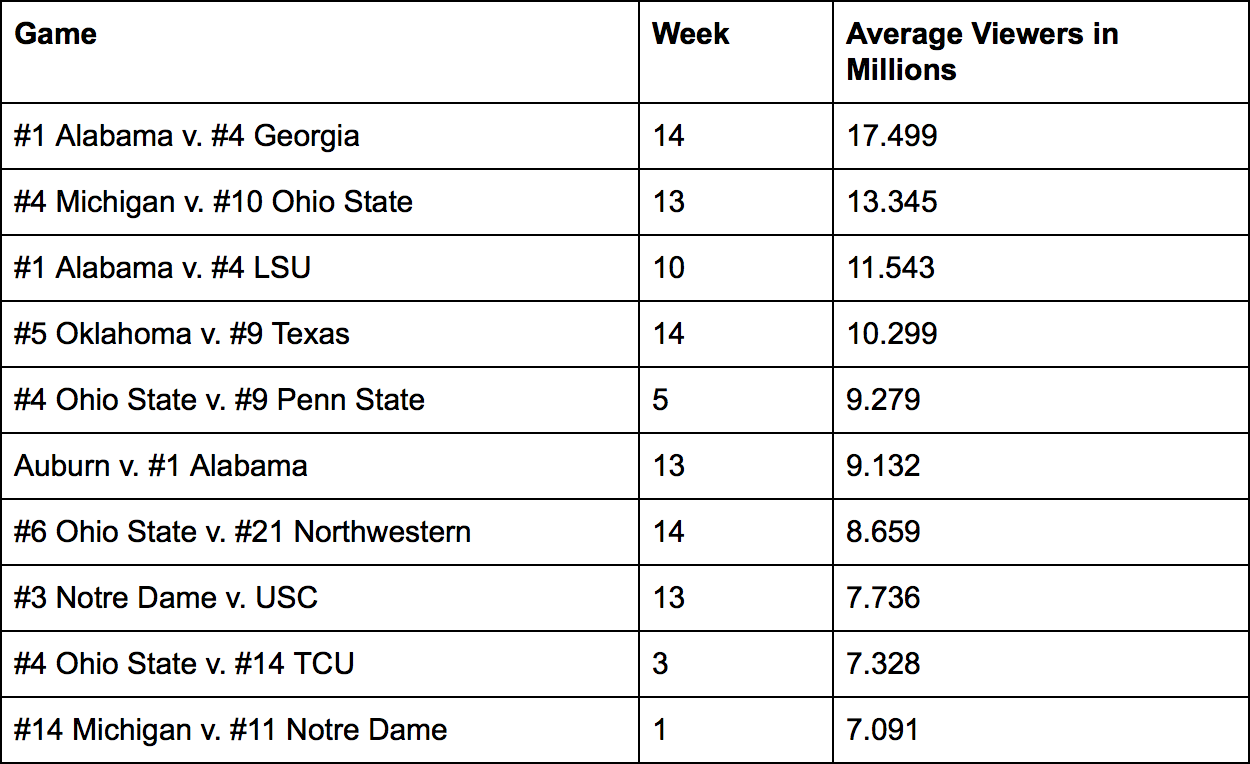 It is interesting to note that, in terms of audience demand, the Pac-12 and the ACC make curious comparison partners. No ACC school appears on the Top 10 list above, and the only Pac-12 school to crack the list, USC, did so while playing Notre Dame. Eventual national champion Clemson’s most-watched game (excluding the College Football Playoff) was a Week 5 early kickoff against Syracuse which attracted 4.617 million viewers. The most-watched game involving ANY ACC school was #17 Virginia Tech v. #19 Florida State in Week 1 (5.576 million). More comparisons between the two conferences as we move through.

A growing line of literature attempting to predict television audience of live sports now exists. Dr. Steve Salaga from the University of Georgia wrote for ADU in November 2017 about the potential impact of betting on college football ratings. The literature typically looks at independent variables such as outcome uncertainty, scoring, superstar effects, race, and gender on live sports television viewership. For those interested, I recommend starting with Salaga’s work with Dr. Scott Tainsky of Wayne State University in the Journal of Sports Economics in which they study the influence of several variables on Nielsen ratings of BCS games. In no way am I suggesting this article conforms to any of the rigor of those academic and peer-reviewed studies. Rather, this is an attempt to take a broad view of what might influence television viewership using available data.

For each college football game in 2018 with a 1.0 rating or greater, I looked at a) conference affiliation of the home team, since that often dictates network rights; b) network on which it was broadcast; c) rankings of opponents at time of game (I used the Coaches Poll from ESPN.com and reverse coded so that the #1 team in the country received 25 points, #2 received 24 points, etc.); and d) kickoff time of game, coded as early (before 3:00 ET), afternoon (before 6:00 ET), primetime (before 9:00 ET), or late night (after 9:00 ET). Data from Sports Media Watch did not reflect games broadcast on the SEC Network, Big Ten Network, or Pac-12 Network. My analysis included all regular season matchups as well as conference championship games. It did not include Army-Navy in Week 15.

Simple correlation analysis of all variables revealed, as would be expected, a strong, positive relationship between viewership and rank (r = .629). The more competitive the matchup, the stronger the viewership demand. Correlations for the other independent variables – conference affiliation of home team (r = .030), network (r = -.178), and time (r = .023) revealed little. The negative relationship between network and viewership suggests fans do not carry network bias, they will find the game regardless of network.

The low coefficient for kickoff time indicates no viewer preference based on time, though that warrants further discussion. As the following chart reveals, primetime games attracted the largest average audiences, with the incremental difference between early and afternoon start times at roughly 400,000 viewers.

Of the seven late night kickoffs in the sample, six were on Pac-12 campuses (only Ole Miss v. #6 LSU in Week 5 was not). The most watched late night telecast was Week 2 featuring #13 Michigan State at Arizona State, which generated 2.297 million viewers and a 1.5 rating. It is not inconceivable to attribute much of that viewership to the presence of Michigan State and its large alumni base. Given the early kickoff slot drew twice as many viewers as the late night slot, perhaps Wilner is on to something as a way to increase Pac-12 television viewership.

Is it fair to equate low viewership demand of late night Pac-12 games to the conference as a whole? Maybe, or maybe not. Consider viewer demand for games by home team conference. Again, the Pac-12 and ACC make for good comparison. The Pac-12 was equal to the ACC in total number of games with a 1.0 or greater rating in 2018, but the Pac-12 games attracted about 300,000 fewer viewers on average. If we remove the seven “late night” games in the sample, the Pac-12’s average viewership increases to 3.704 million, moving it ahead of the Big 12. Which is better? More games, or more aggregate viewers?

One caveat to consider in the Pac-12 calculations is the conference’s most watched 2018 home game featured Notre Dame at USC in Week 13, drawing 7.736 million viewers. Notre Dame’s on-field success in 2018 certainly created audience demand, as evidenced by the 3.432 million average viewers its games attracted on NBC. Similarly, one of the five AAC games in the sample included Notre Dame at Navy.

A deeper dive into the Pac-12 games in the sample reveals two additional interesting observations. First, some of its most-watched games occurred on a Friday, potentially in an exclusive viewing window. The Pac-12 championship game between #11 Washington and unranked Utah drew 4.059 million viewers on Friday, Nov. 30, the day before the other conference championships. For comparison, the ACC championship with #2 Clemson and unranked Pittsburgh on Saturday, Dec. 1 drew only 4.236 million viewers, while competing head-to-head with the Big Ten championship. Perhaps a matchup other than Washington and Utah in the Pac-12 title game may have generated more audience.

An argument could be made for the Pac-12 to seize on Friday nights, scheduling more games on that day, as a way to increase exposure. Of course, the Big Ten moved in that direction in 2017, with mixed results from conference members.

Finally, let’s breakdown the competitiveness variable, which I operationalized as rank points. By assigning 25 points to the #1 ranked team in the Coaches Poll (as pulled from ESPN.com) each week (the second-ranked team received 24 points, etc.), I produced a combined “Rank Points” from home and away teams to get an overall score with a maximum of 49 rank points. Two games featured a combined 47 rank points, #1 Alabama at #4 LSU in Week 10 and #1 Alabama v. #4 Georgia in the SEC Championship (Week 14). Unfortunately, on-field performance is something conference commissioners, and television executives, cannot control.

The following table shows the top 10 games of 2018 by rank points, with their viewership total. 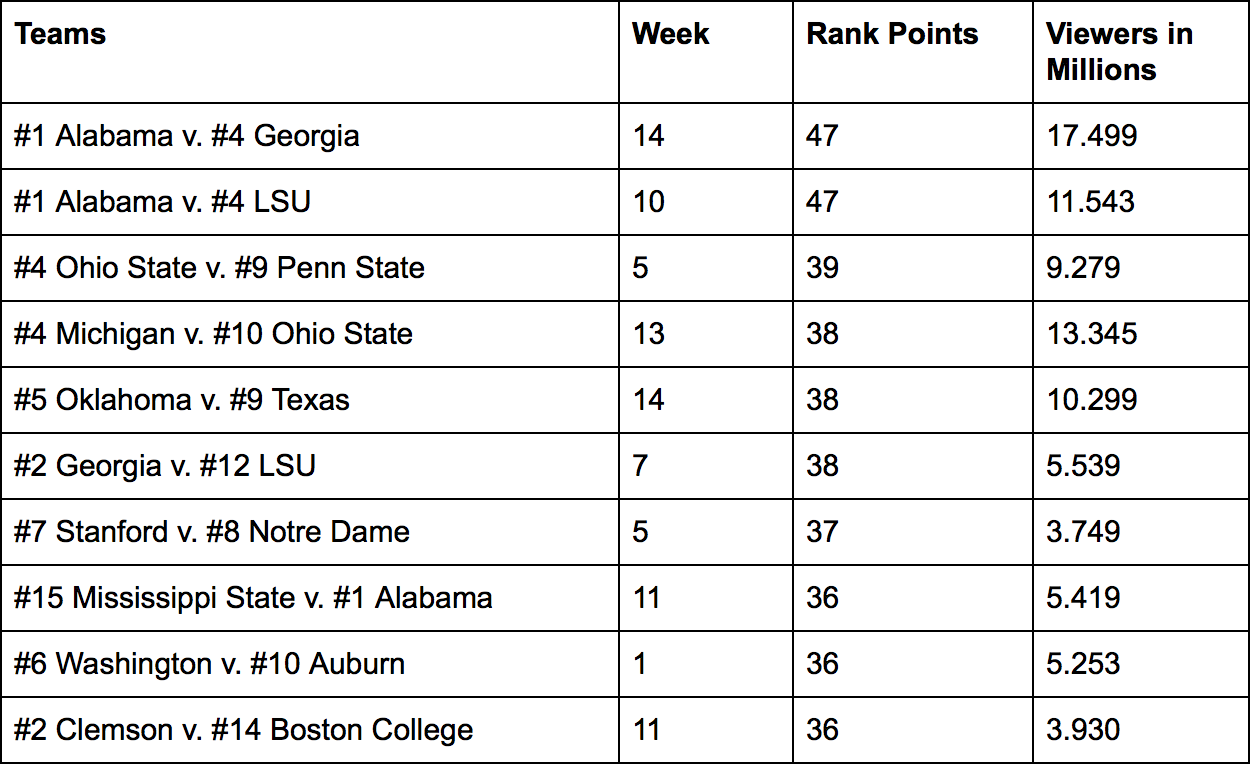 Again, themes emerge from analyzing that table. First, television executives salivate at late season matchups between top-ranked opponents. Six of the 10 games were played between November 3 and December 1. Both games involving Pac-12 schools occurred early in the season and featured two teams ranked, at the time, in the Top 10. Proving the inexact science of pre-season rankings, Washington would finish the season #13 while Auburn would not be ranked at season’s end. Additionally, Stanford would fall out of the rankings altogether at season’s end as well. Still, the Pac-12 and the ACC had the same number of Top 10 games by rank points, two each.

The purpose of this inquiry was to determine, if possible, whether start time really has an impact on television audience demand, operationalized as viewership. As with any study like this, science will recommend studying the long-term impacts of an independent variable, such as start time, on the dependent variable, viewership. While examining the 2018 season can be fun and can serve as a good jumping off point for future studies, it is nothing more than a snapshot into one case, the 2018 season.

Inclusion of audience data from games on conference-owned networks such as SECN, BTN, and P12N would help our understanding of network effects. As ACCN is set to launch this fall, issues of distribution and viewership for those networks becomes increasingly important. As does the consumer option to stream via OTT or vMVPDs.

This analysis in no way makes the argument the Pac-12 should move to 9 am PT kickoffs. As many people commented on my Twitter feed, and that of Jon Wilner, fans would likely revolt and attendance would suffer. Playing games in front of half-empty stands would not aid public perception about the quality of Pac-12 football. Still, any suggestion of a non-traditional approach to increasing conference exposure, at a time when its league-owned network is struggling for carriage, is worth exploring.