More of A Great Thing: Expansion To 96 Teams In The NCAA Basketball Tournament

I am not an economist, but generally, more is better than less.  And while I am not a sports journalist, I know better than to bury the lede.  The NCAA men’s and women’s basketball tournaments should expand to 96 teams.

With the recent release of the NCAA’s Division I Transformation Committee’s report, the idea of expanding the fields of both tournaments again entered the public domain.  It outraged many in the basketball world who cannot – or will not – accept that change is not a dirty word or unreasonable concept.

Throughout its history, beginning in 1939 on the men’s side and 1982 on the women’s side, the NCAA Basketball Championship has shown a demonstrated pattern of expansion.[1]  The recommendation from the Transformation Committee was to “accommodate access for 25% of active Division I members in good standing in team sports sponsored by more than 200 schools.” Doing the quick math – again, I am also not a mathematician – but that means the fields of both tournaments would expand to at least 90 teams.[2]

So why should the tournament expand to 96 and require a magnifying glass for the bracket?[3] Allow me a moment for my manifesto:

Per last week’s report, an oversight committee will determine the potential expansion in each sport individually.  Further, it says: “…considerations should account for impacts on the timing of the postseason, the total length of the postseason, necessary format changes, broadcast and other partners, budget resources, and host entity event management implications.”

A vital component of an expanded bracket is outlined in the considerations above, with perhaps the essential obstacle being “broadcast and other partners.” Would the broadcast partners of the NCAA tournament be willing to renegotiate, or does that clause exist in the current agreement?  As the noted American existential philosophy poets Titus and Tate have declared, whenever there is a question in college athletics, the answer is, “Money, duh.”

The NCAA bought the NIT in 2005 for $56.5 million to settle a lawsuit with the Metropolitan Intercollegiate Basketball Association.[4]  With the expansion to 96, the NIT would effectively be absorbed into the Madness Before the Madness.  The questions of how to best integrate these 12 additional games into the NCAA tournament can be fodder for debate, but one thing is for sure: 12 more NCAA tournament games would have better viewership than 12 NIT games.

It is also worth noting that while there is no WNIT officially run through the NCAA, such a tournament exists through a third party.  The 96-team women’s field would operate within the same framework as the proposed men’s tournament, including many of the teams who opt into playing in the WNIT.  (Sorry, Triple Crown Sports)

The staunchest critics have claimed this is a mechanism to reward the Autonomy Five and the Big East by providing those member institutions more overall bids.  These criticisms gained oxygen when SEC Commissioner and co-chair of the Transformation Committee Greg Sankey supported the idea of tournament expansion at his league’s Basketball Media Day this past October.

Last year, of the 36 at-large bids in the field of 68 for the 2022 NCAA Men’s Basketball Championship, 29 (81%) went to the Big Six.  Over the last five NCAA Tournaments, the Big Six conferences averaged 30.6 at-large bids – a whopping 85%.  Moving to a 96-team field would not solely benefit those teams and conferences already gobbling up most of the at-large bids.

Using the data from 2022, the league which would have benefited the most from a 96-team field:  The Atlantic 10, as they would have received four additional bids.  There would have also been six additional leagues that would have become multi-bid leagues.  This season, our home – the West Coast Conference – is having a tremendous year, and under the 96-team format, would have six teams firmly in consideration for the 2023 tournament.  This would make every conference game much more valuable.[5]

The beauty of the NCAA tournament is the superb storytelling that takes place and the exposure it affords an institution.  Everyone loves Cinderella, and under the 96-team bracket, it creates more opportunities for storylines like Saint Peter’s and VCU – the improbable 15-seed or the team that goes from the First Four to the Final Four.[6]

Coaches are always under pressure to win, and college basketball coaches are no exception.  This has always led to difficulty in scheduling, as non-conference scheduling becomes complex based on the metrics, analytics, or a litany of, shall we call them, variables.” An opponent can be on the wrong date, too good, too bad, too old, the wrong style, high tide, full moon, or it could just be Tuesday’s lunch and indigestion, causing the coach to feel that a game wouldn’t work.[7]

With more advanced analytics now assisting with scheduling, far more schools know the metrics that will produce a successful resume on Selection Sunday.  This has made coaches more apprehensive and cautious as they avoid teams in the middle of your favorite ranking, as there is a chance you could lose to them.  With more teams in the tournament, coaches would be more apt to take risks in scheduling.  Teams that may seem taboo to schedule may become highly sought-after partners in the Bigger Dance.

It is one thing to advocate for a concept, but what would a 96-team men’s basketball field look like in practice?  How would it work logistically?  Here is the 35,000-foot view: [8] 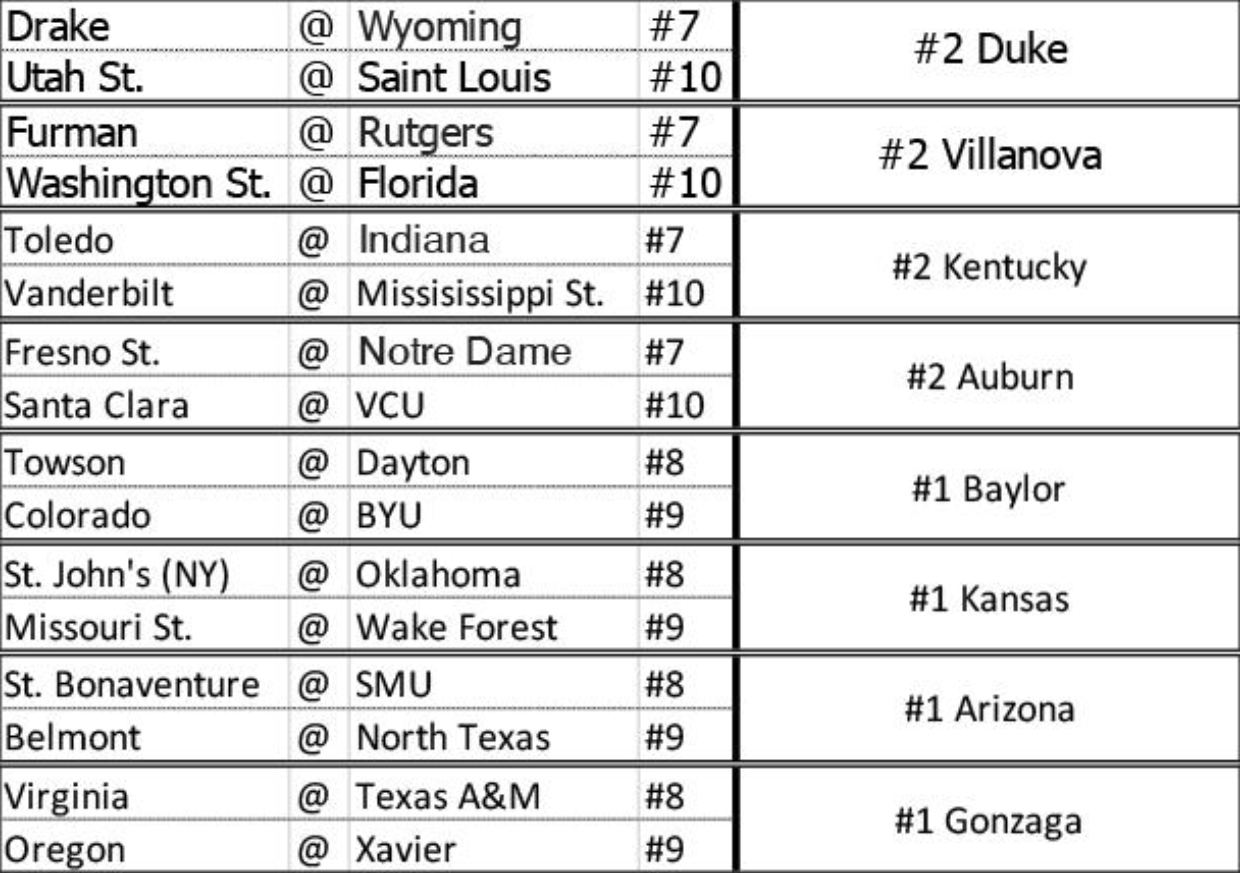 Not exactly Power Six Conferences in the MBTM, as they represent just 11 of 28 teams (39%).  The breakdown of the additional 28 teams is as follows: 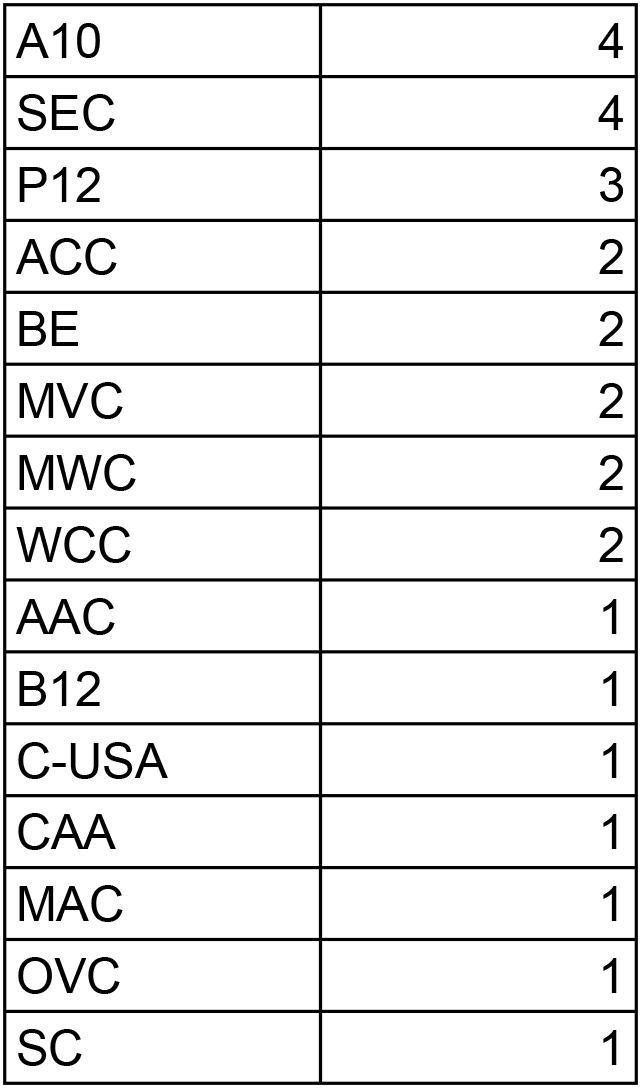 Clearly, this is one athletic administrator’s attempt at a 96-team tournament.  There are many different ways to expand, many different permutations to explore, but hopefully, this will serve as a starting point and spark discussion.

METHODOLOGY TO DETERMINE THIS MOCK BRACKET

*Many thanks to Mike Laprey, Associate Athletic Director of Athletic Communications at Boston College for his outstanding proofreading and college basketball knowledge.

[1] The only basketball pundit (debatably Big J journalist) that seemingly has embraced the possibility of the tournament expanding is Mark Titus, who tweeted this out, pointing out the absurdity of it all: https://twitter.com/clubtrillion/status/1583152097452707841

[2] As of this writing, there is 363 Division I men’s basketball teams and 361 women’s teams.  The math rounds up to 91 for the men and rounds down to 90 for the women.  A fun trivia fact is that the two NCAA Division I teams that don’t have women’s basketball are the Citadel and VMI.

[5] Clearly, the whole purpose of this article is self-serving, as LMU is one of those six schools.

[6] That spunky upstart UCLA also made a run from the First Four to the Final Four.  The point is, it can be done.  Texas A&M might have been that team last year, but it likewise could have been Belmont, who has gone to eight NCAA tournaments as an AQ but never made it as an at-large.

[7] Men’s basketball coaches are also traditionally the latest at scheduling non-conference games.  The transfer portal has made this even more difficult, as 1) coaches start scheduling after they are done recruiting the portal and 2) coaches want to know the personnel of the other team.

[9] I always found it ridiculous that teams had to play-in as a #16 to get into the actual tournament.  Dayton has been a tremendous host and the event has done very well, but it isn’t the same as appearing in the NCAA tournament.  This has been a controversial topic, as HBCUs are often in the First Four, but it also counts as a tournament unit for financial purposes.  Clearly units is a whole different blog post, but we need to get to 96 first.

[10] There is presently no existing trademark on Madness Before the Madness.  I am hereby staking my claim without filing anything.

[11] Alternatively, it could be played neutral site in Dayton and Las Vegas if it is easier.  Playing it as a home game leading into the NCAA tournament would be incredibly fun and it rewards those teams that had a better year.  It also creates debate, which is part of what makes the tournament selection so fun.