Is College Football Finally Over Covid?

Likely as a result of the pent up demand for live, televised football played in front of packed stadiums, early season viewership for both college football and the National Football League in 2021 is strong. Because the 2019 football season seems like a lifetime ago, I wondered whether this interest in college football is on par with historical seasons, or if it represented some new trends.

We are six weeks, or roughly halfway, into this year’s college football season, and the news for conference commissioners and their media partners around television demand is mostly positive. A quick comparison with 2018 and 2019, however, leaves open the possibility this year’s ratings news is not all sunshiny. In a nut-shell, demand for marquee college football games through week six is booming as evidenced by the number of games watched by more than four million viewers. However, overall demand, measured by the number of games which have received a 1.0 rating, is actually down.

So, what gives? First, let’s clarify my methodology. I chose not to care about 2020 because it was so different.

For the purpose of this analysis, I consulted Sports Media Watch’s weekly publication of ratings and viewership, as well as the coaches top 25 poll as published on ESPN.com. I was only interested in those games which drew a 1.0 rating or greater. Nielsen estimated in August 2020 that 121 million TV households existed, meaning a 1.0 rating is equivalent to 1.2 million homes watching. In addition, since college football games do not have an exclusive broadcast window, like, say, NBC’s Sunday Night Football, I was also curious to know how many games attracted more than four million viewers. As a reference point, none of the live NFL televised games on FOX, CBS, NBC, and ESPN this past week drew fewer than 12 million viewers, or three times the audience in my sample. The NFL remains dominant.

The chart above, however, is somewhat misleading as individual games in both 2018 and 2019 drew larger single-game audiences than any game so far in 2021 as the table below illustrates. In fact, although 2021 claims six of the top 10 most watched games in the sample, only two games have drawn more than eight million viewers.

Week One Skews Everything

College football’s opening weekend on Labor Day skews results presented here. Buoyed by multiple primetime slots across several days and no competition from the NFL, 12 of the 55 games with a 1.0 rating or higher so far in 2021 aired during Week One. FOX aired five games during opening weekend with 1.0 or higher, while ABC televised four, including the weekend’s big prize, Georgia-Clemson which drew a 4.6 and 8.86 million viewers. (NOTE: I have included FOX’s Week Zero game between Nebraska and Illinois as part of Week One totals).

Because Week One is often filled with anticipation for a new season, games historically attract much larger audiences than later week games. ABC drew a 4.2 rating and 7.75 million viewers for Notre Dame-Florida State during an exclusive window on Sunday night of Week One. Given FSU’s subsequent struggles, it is hard to envision that game coming close to matching those figures now. Still, it remains the fourth most-watched game of 2021.

What Time Is It? It Does Not Matter

One major difference between 2018 and 2021 is that kickoff time does not matter. If the matchup is compelling, viewers will find the game and tune in. The evening primetime slot, operationalized as kickoffs after 6:00 pm ET but before 9:00 pm ET, had the highest number of games with a 1.0 rating or greater in 2018, a total of 20 (33.9%). That number dipped slightly in 2019 to 18 games, or 30.0%, the exact same number as the afternoon time slot, operationalized as kickoffs after 3:00 pm ET. As the table below shows, the most-watched time slot in 2021 is either early or afternoon.

FOX’s Big Noon Saturday has worked handsomely, highlighting important conference matchups and creating demand for the dreaded early kickoff. In fact, the most-watched game in Weeks Two (Oregon-Ohio State) and Four (Notre Dame-Wisconsin) were both noon kickoffs on FOX. This is a good sign for the network as it only “won” two weeks in all of 2018 and three in 2019. One of those games each year was Ohio State-Michigan, scheduled for a noon kick on Saturday, Nov. 27, 2021 on FOX.

Perhaps in response to FOX’s success, ABC/ESPN has used its top announcing team of Chris Fowler, Kirk Herbstreit, and Holly Rowe on noon kickoffs each of the past two weeks (Arkansas-Georgia and Oklahoma-Texas). The Red River Shootout gave ABC/ESPN its first time slot “win” of the 2021 season. FOX has come to dominate the 12:00 window.

The trend line across networks is the increased percentage of games with a 1.0 rating or greater on FOX. In 2018, FOX aired just 10 games during the first six weeks with a 1.0 rating or better. FOX’s investment in Big Noon Saturday and the Big Ten specifically have increased its inventory of games and improved its share of 1.0 games from 16.9% in 2018 to 25.5% in 2021. This has largely come at the expense of ESPN and NBC, both of which have experienced decreases.

NBC’s slide warrants further investigation. Through six weeks in 2021, only two Irish games have aired on NBC, with another four scheduled the rest of the season. NBC’s decision to stream the Notre Dame-Toledo game on Peacock left it open to negative feedback. While streaming may be the future, NBC missed out on an audience of approximately 3.19 million viewers (the NBC average for two games against Purdue and Cincinnati in 2021). But, as I will show later, Notre Dame is still a dominant driver of eyeballs.

If FAANG can become an acronym to refer to tech giants, then I am laying claim to TOOGAN to refer to the Big 6 college football giants: Texas, Oklahoma, Ohio State, Georgia, Alabama, and Notre Dame. These six schools regularly play games in front of larger televised audiences, regardless of time slot or network.

The table below shows the average rating/viewers in millions for each game in which TOOGAN has participated in 2021. Games on the Longhorn Network, Peacock, SEC Network, ACC Network, and PPV were not included. Ohio State’s average rating does not include two games on the Big Ten Network, but average viewers are for all six games. 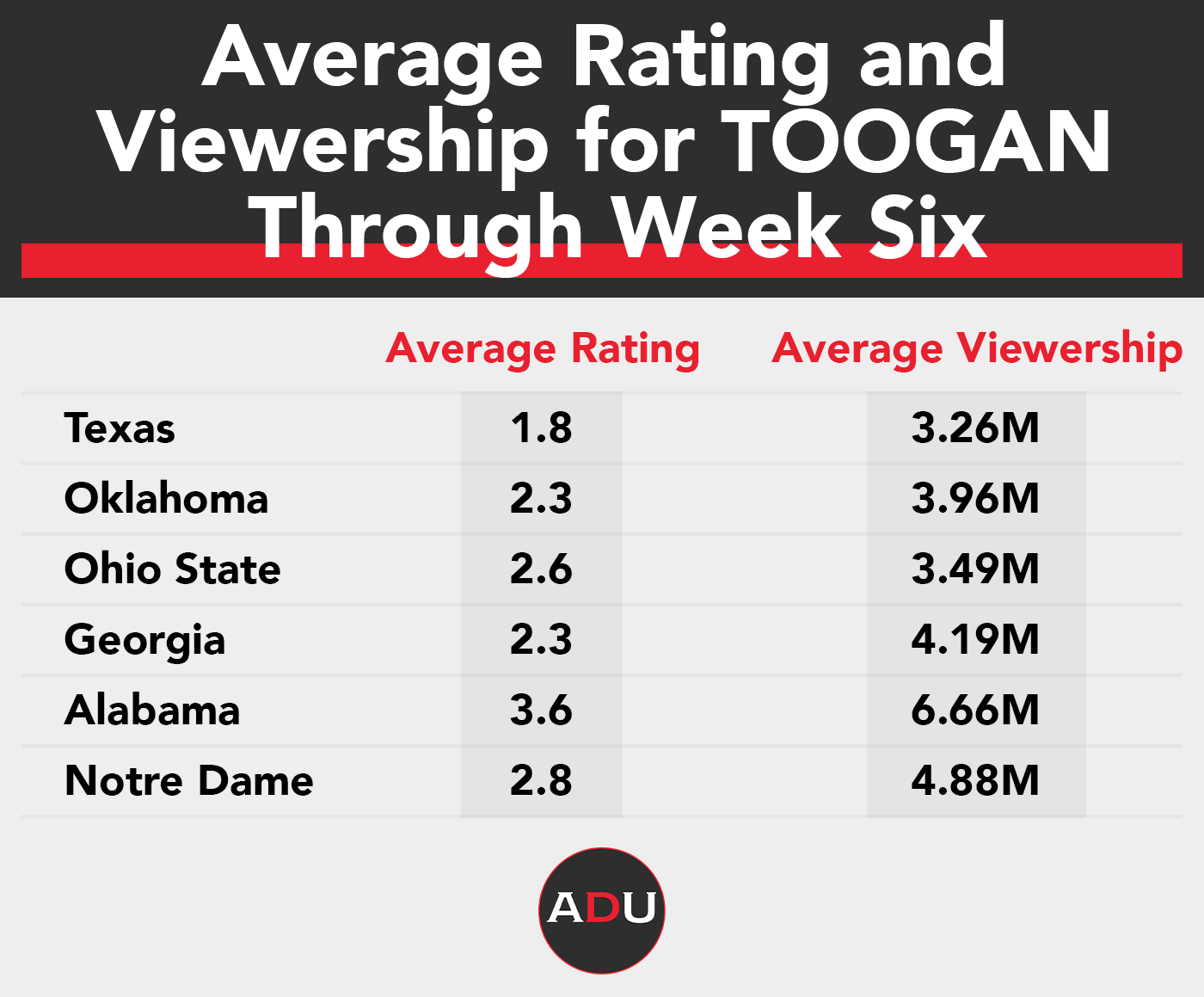 The table illustrates the potential viewership networks miss when they shift a TOOGAN game to a less-widely distributed network or platform. Admittedly, Alabama’s two SEC Network games this year, against Mercer and Southern Mississippi, likely would not have attracted six million viewers. However, Ohio State’s figures include games against Tulsa (FS1), Akron (BTN), and Rutgers (BTN), all of which attracted more than one million viewers, suggesting viewership on conference-owned networks has potential to attract strong audiences.

Disney and the SEC have to be excited to welcome Texas and Oklahoma to its ranks in the near future. The $300 million per year ESPN is paying for rights beginning in 2024 certainly seems like a bargain, and one can certainly understand the rumors of impropriety in the realignment process.

Based on this analysis, the bottom line is that college football’s marquee programs and conferences are healthy and strong, surpassing the levels observed pre-pandemic. However, the decrease in overall number of games attracting a 1.0 rating, combined with weaker showings from the ACC and Pac-12, suggest the future of college football is really just a two-conference race.

Articles
Measuring The First 100 Days Of Name, Image and Likeness

Four months into the Name, Image and Likeness era, INFLCR has aggregated and analyzed its transaction data. With over 200 Division I partners, over 5,000 transactions have been reported to the INFLCR Verified platform.

Articles
What is Your Department Trying to Achieve With Ticket Pricing?