In the first two months of the 2019-20 college basketball season, six different teams earned the No. 1  ranking in the AP Top 25 poll, one shy of the single-season record, and two of the first three teams to hold the top spot – Kentucky and Duke – lost as heavy favorites at home.

Evansville beat No. 1 Kentucky in Rupp Arena 67-64 despite being a 25-point underdog according to oddsmakers, and two weeks later, Stephen F. Austin ended No. 1 Duke’s 150-game non-conference home winning streak with an 85-83, buzzer-beating victory.

Both of those games were guarantee, or “buy,” games that are essential for power conference schools that want to add to the portfolio of home games that they can put in season ticket packages. Plus, if the games go as expected for the home team, they’re games the host school can typically pencil in as wins.

But not always, as Evansville and Stephen F. Austin reminded us.

The visiting schools agree to this arrangement because each guarantee game between Division I programs comes with at least a five-figure, and sometimes six-figure, payout that can help fund the visiting school’s basketball program, if not their athletic department at large.

So adding insult to injury for Kentucky, University of Evansville cashed a $90,000 check on top of being on the winning end of one of the biggest upsets of the season.

But these upsets are rare. Some would even say they’re the epitome of brutality.

AthleticDirectorU acquired the signed, non-conference game contracts for 126 Division I schools for a total of 592 non-conference guarantee games that totaled more than $35 million in guarantees.

Private universities are exempt from public records request and states such as Alabama, Arkansas, Delaware and Virginia have state records laws that require requesters to be a resident of the state in order to make a public records request, so non-conference game contracts aren’t available for all 353 Division I programs.

Although, when a public school plays a private school, or a school that is protected by state record laws, we were able to obtain some individual contracts from schools like Duke, Gonzaga, Stanford or TCU that are otherwise not required to disclose their contracts.

Of the 594 guarantee games that have already been played this season for which we obtained contracts, the visiting institution that received the financial guarantee won just 50 times, or roughly 8.4 percent of the time.

The average margin of victory in these games was roughly 21 points in favor of the host school. In fact, among the schools examined, there were more games decided by 50 points or more (43) than there were one-possession games (33).

Among the schools examined, the biggest win in a buy game was Utah’s 94-point win over Mississippi Valley State and the biggest lost by the host school was Illinois-Chicago’s 30-point loss to Canisius.

For contracts in which a school received a lump sum for playing in a multi-team event (MTE), we divided the total guarantee received by the number of games played against Division I opponents in the event. For example, Winthrop received $140,000 for agreeing to play four games – two true road games at Fresno State and Saint Mary’s, plus two home games against non-Division I opponents – so we calculated the Eagles’ road win over the Gaels as being worth $70,000.

We counted home games that were part of a MTE as buy games as long as it was a true road game and the visiting team received a guarantee as part of the event.

Likewise, when a school paid a lump sum to host games as part of a MTE, we divided the host fee by the number of games the school agreed to play against Division I opponents. These guarantee calculations are noted when applicable.

It’s also worth noting that travel expenses are sometimes included in guarantees. Sometimes a host school will pay for the visiting team’s travel and lodging in addition to paying a guarantee and sometimes the visiting school is responsible for its own airfare and hotel expenses. We only counted agreed upon travel and lodging expenses if they were stated in the contract to be part of the guarantee. Visiting schools receive a financial guarantee regardless of the outcome of the game but an interesting lens by which to judge a team’s performance in non-conference play is to examine how many buy games it won or lost, especially if you put a price tag to them.

Eight schools among those examined lost buy games whose game contracts added up to six figures. They’re listed below:

We found five schools that won buy games whose guarantees added up to be six figures:

UC Riverside, which won buy games at Nebraska ($110,000), Fresno State ($85,000) and San Jose State ($70,000), was the big winner, based on the contracts obtained. And we’re still waiting on UC Riverside’s response to our public records request, meaning that $265,000 came from a handful of its opponents’ game contracts.

Based on our data, we found that the Big Ten leads all conferences nationally in buy game host percentage. AthleticDirectorU obtained the non-conference game contracts for nine Big Ten schools, which collectively play 98 non-conference games this season. Forty nine games, exactly 50 percent of those examined, are buy games.

Due to many conferences being full of private institutions, data isn’t available for all 32 conferences. 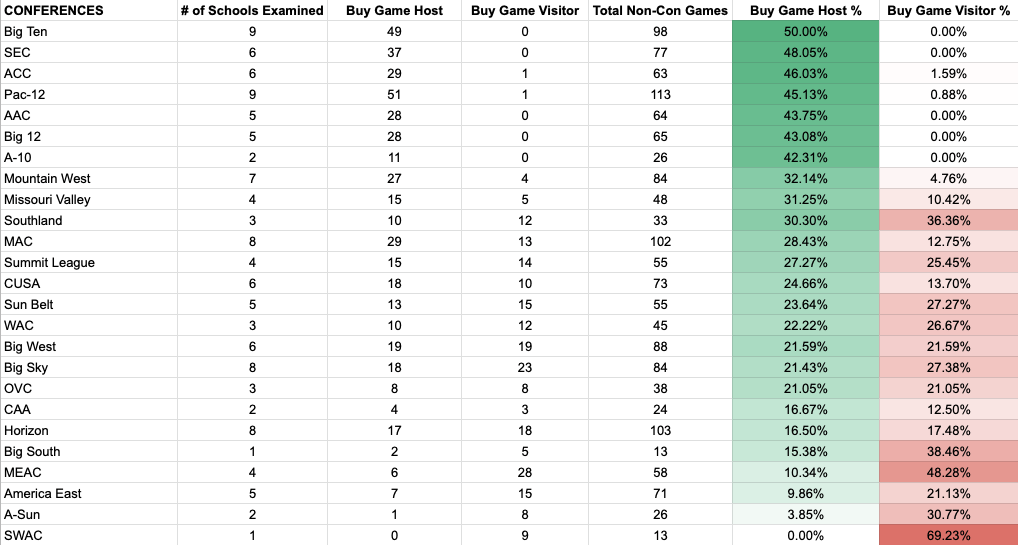 Where to go for the biggest paydays

The most common guarantee is a $90,000 guarantee. Seventy-three of the buy games examined, or roughly 12 percent, had a $90,000 check attached to them.

It may come as a surprise to some that coaches and directors of basketball operations who are looking to build their program’s non-conference schedule can potentially receive the same guarantee from Grand Canyon, Utah State and VCU that they could from Indiana, Kentucky or North Carolina.

The single-biggest guarantee we found in nearly 600 buy games was Kentucky’s $150,000 payment to Georgia Tech this season. Although, that arrangement was a bit unique in several senses: it was between two power conference teams and it was a two-game series but not a true home-and-home.

Kentucky hosted Georgia Tech in December in a game in which the Yellow Jackets received $150,000 for playing, then the two schools will play in Atlanta – but at the Atlanta Hawks’ State Farm Arena, not at Georgia Tech’s McCamish Pavilion – in November 2020, but there isn’t any compensation attached to the second game. (For what it’s worth, if the game is mutually agreed to be moved to Georgia Tech’s home arena next season, then Georgia Tech would owe Kentucky $150,000 for playing the game.)

Interestingly, the only games that we found a power conference school agreed to a contract in which it was a buy game visitor was when a power conference school agreed to a two-game series with Kentucky in which one game was played in Lexington and the second game was played at a neutral-site location near to the other school. The Wildcats agreed to these contracts with Georgia Tech and Utah with neutral-site games in Atlanta and Las Vegas, respectively.

*San Jose State paid $180,000 to Basketball Promotions & Events LLC., the organizer of the Las Vegas Classic, as part of a four-game agreement in which it hosted three games (just two against DI opponents), so we counted its loss to Portland State as a game worth $90,000; Illinois Chicago paid $115,000 total for home games against Mercer and Canisius, and it lost both games.