How Much Is NIL Worth To Student Athletes?

As college athletics continue to grapple with the implementation of a fair and balanced set of rules for student-athletes to monetize their Name, Image and Likeness (NIL), the question of just how much money they could generate has been the subject of much speculation. In a continued effort to provide intercollegiate leaders with key insights, AthleticDirectorU teamed up with Navigate Research – one of the most trusted sources of media, marketing, and sponsorship valuations in the industry – to determine how much student-athletes can make off their NIL in both group licensing and free-market scenarios.

The NFL and MLB Players Associations receive approximately $120 million in combined annual revenue from licensing deals with video game publishers Electronic Arts Inc. and Sony Corp, and trading-card maker Panini America Inc, which equates to approximately $48,000 per-player each year. On the upper-end, Take-Two Interactive will pay the National Basketball Association and its players’ union as much as $1.1 billion over the next seven years to continue making NBA 2K, which works out to $400,000 per-player annually.

From a collegiate athlete standpoint, last year Electronic Arts agreed to pay approximately $40 million to more than 29,000 current and former players. The payments averaged out to $1,200 per student-athlete, with a maximum payment of $7,200, depending on the number of games in which they appeared and whether they were closely identified in those games.

We can also reference apparel licensing deals both within professional and collegiate sports to assess the range of compensation student-athletes might receive. Nike’s licensing deal with the NBA is for a reported $1 billion over 8 years, for an Average Annual Value (AAV) of $125 million, which works out to approximately $275,000 per-player annually. On the collegiate side, if we average the Top 10 most valuable apparel deals in college athletics, we get an AAV of about $8,000,000 per school, which when divided by an average of 750 student-athletes, gives us an approximate value of $10,000 per-student athlete. 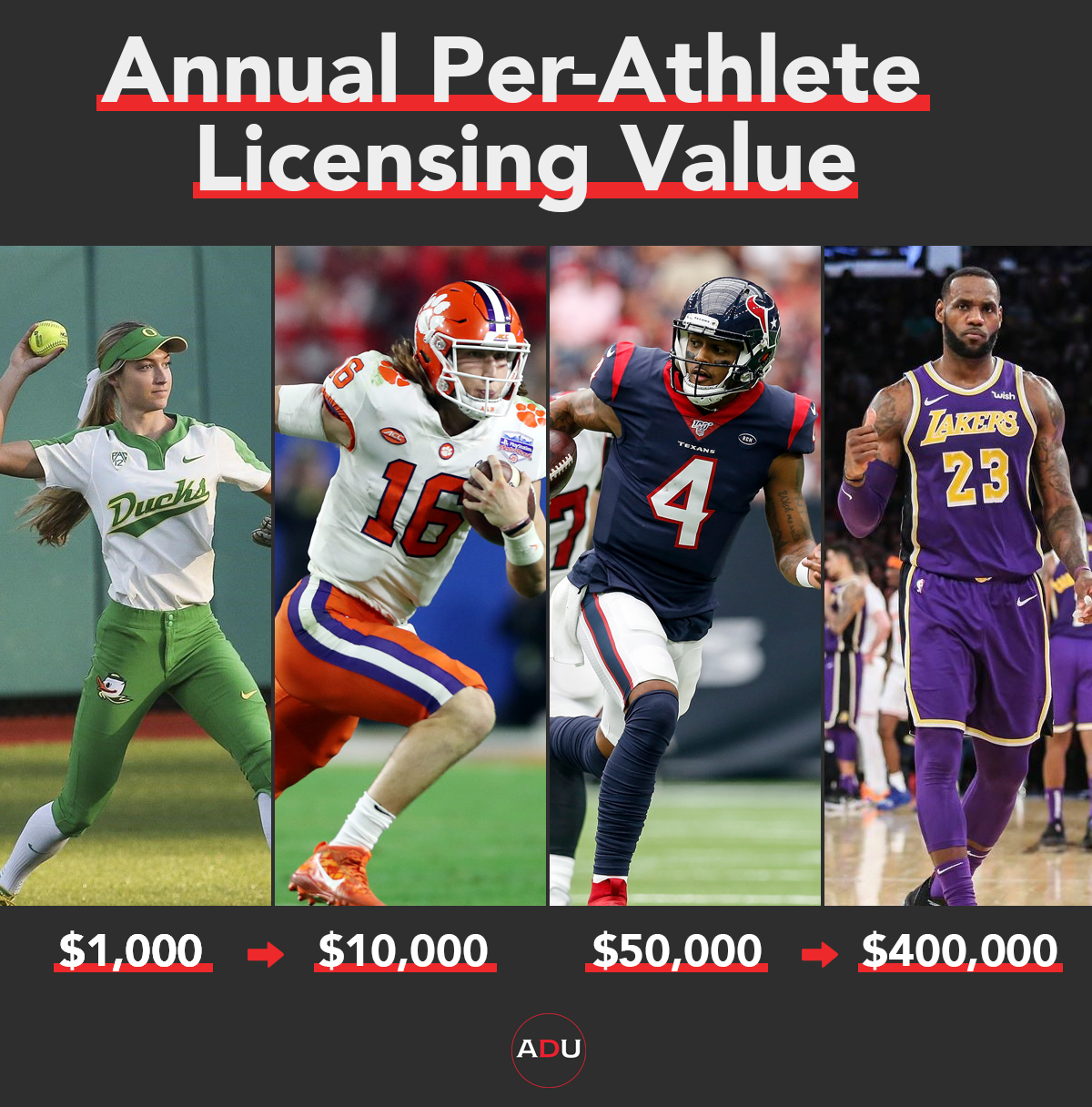 Developing a methodology to estimate what student-athletes can earn through free market endorsements and other usages of their NIL is not necessarily a straightforward affair. Many variables exist, the biggest being how deals will be brokered, and whether the school and/or NCAA will receive a share of the revenue. That being said, if we assume student-athletes are compensated at the same rates as professional athletes based on their popularity and reach, we can use Instagram followers as a proxy to come up with market rates for each athlete.

By analyzing what the world’s top 100 professional athletes make from their endorsements portfolios (almost always consisting of multiple brands), we found a value of around $0.80 per Instagram follower, on average. When applied to Instagram followers for college athletes from the 2019-2020 school year, annual endorsement revenue estimates would be $700,000 for LSU’s Joe Burrow, $440,000 for Alabama’s Tua Tagovailoa, $390,000 for Oklahoma’s Jalen Hurts and in the $5K – $30K range for less popular athletes. 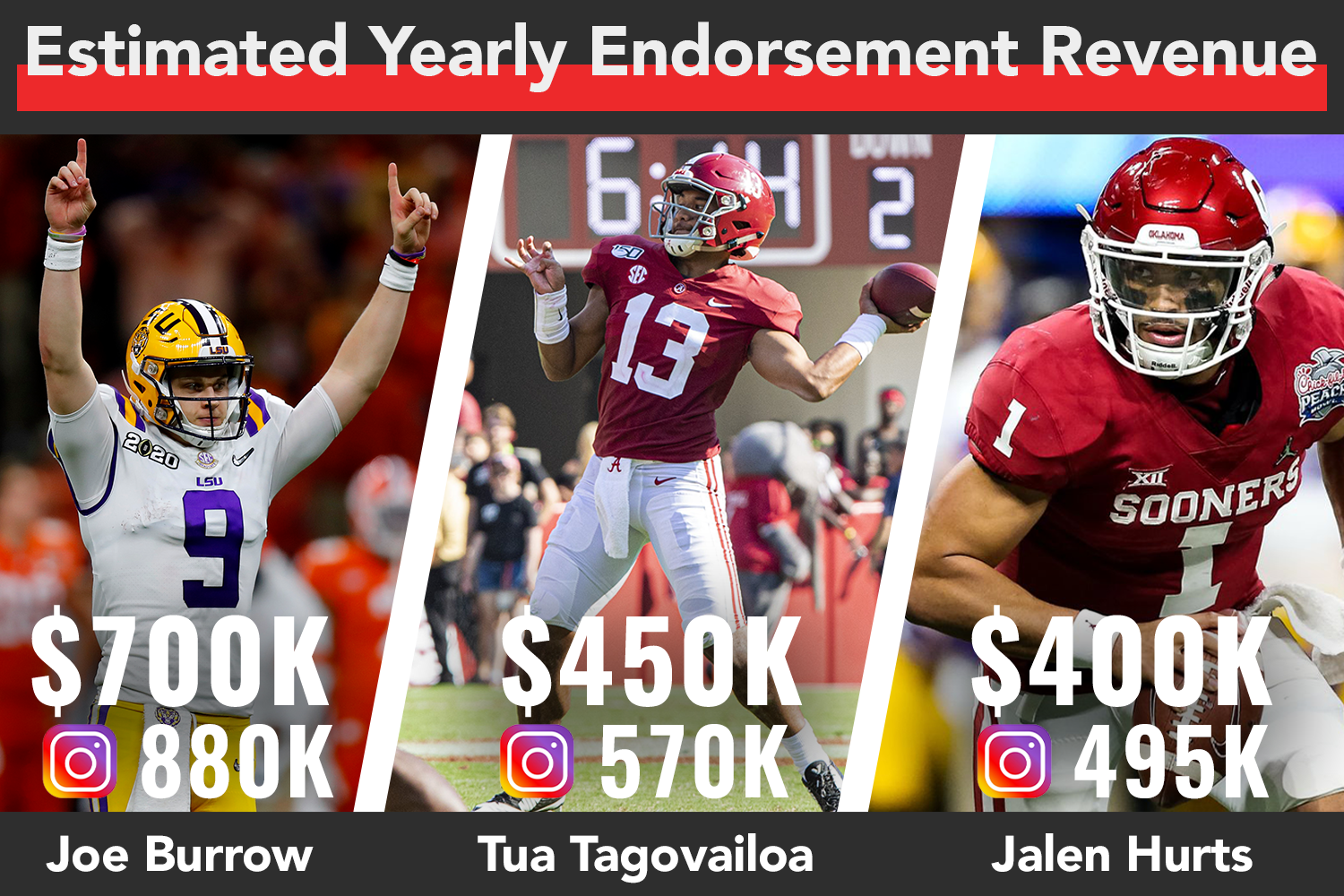 When examining the promotional fee that celebrities and athletes like Kim Kardashian and Christiano Ronaldo are charging for sending out commercialized Instagram posts, the average price is $0.006 per Instagram follower or $6 CPM (cost per 1,000 impressions).  If applying the same rate of per-follower compensation to collegiate athletes, we estimate that athletes like  UCLA’s Madison Kocian and UNC’s Cole Anthony would generate approximately $4000 per Instagram post. Duke’s Cassisus Stanley and Clemson’s Trevor Lawrence would earn $3000 per post, Less popular athletes would earn in the range of $100 – $500 per post.

Income earned by Twitch streamers also provides a similar benchmark; streamers with more than 800,000 followers and 10,000 concurrent viewers earn around $20,000 a month, equating to about $.02 per follower per month. Ninja – the highest paid Twitch streamer – is estimated to earn over $5 million a year, while other top streamers like Shroud and DrLupo earn between $2 and $3 million yearly.

Using the methodology described above, AthleticDirectorU and Navigate have compiled a list of some of college sports most valuable student-athletes based on yearly endorsement revenue potential (Instagram Followers x $0.80 Endorsement Value). The list includes a sampling of athletes that are top in their respective sports. One potentially surprising takeaway from our analysis  is that many of the most popular female athletes would likely be able to generate as much – if not more – endorsement revenue than their male counterparts based on social reach. Indeed, by our estimates, the UCLA women’s gymnastics team alone could be worth as much as $1,250,000 annually in endorsement revenue, including generating almost $10,000 per team wide sponsored Instagram posts pushed out via a platform like Inflcr. 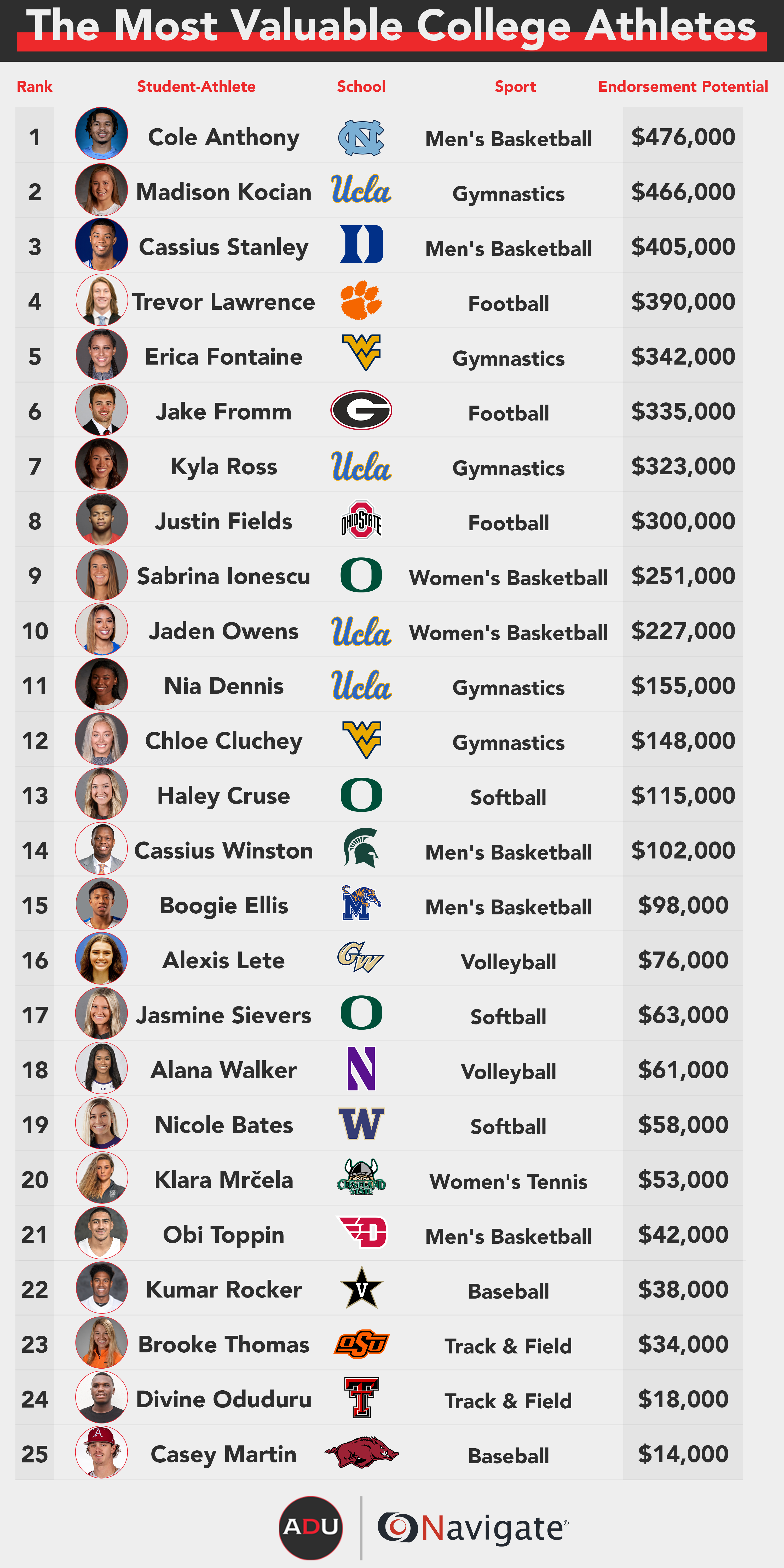 Many student-athletes have leveraged their notoriety in high school and youth sports to accumulate massive followings on social media channels, regardless of the sport they play in. Indeed, as the next class of Gen Z student-athletes enters college, they are bringing more and more social followers with them.

The incoming 2020 freshman class has a number of male and female student-athletes who would easily slide into the top 10 of potential endorsement revenue before they ever play a game in college. In fact, California’s Jalen Green and Josh Cristopher – who has yet to commit – will bring with them more social media followers than any current student-athlete. 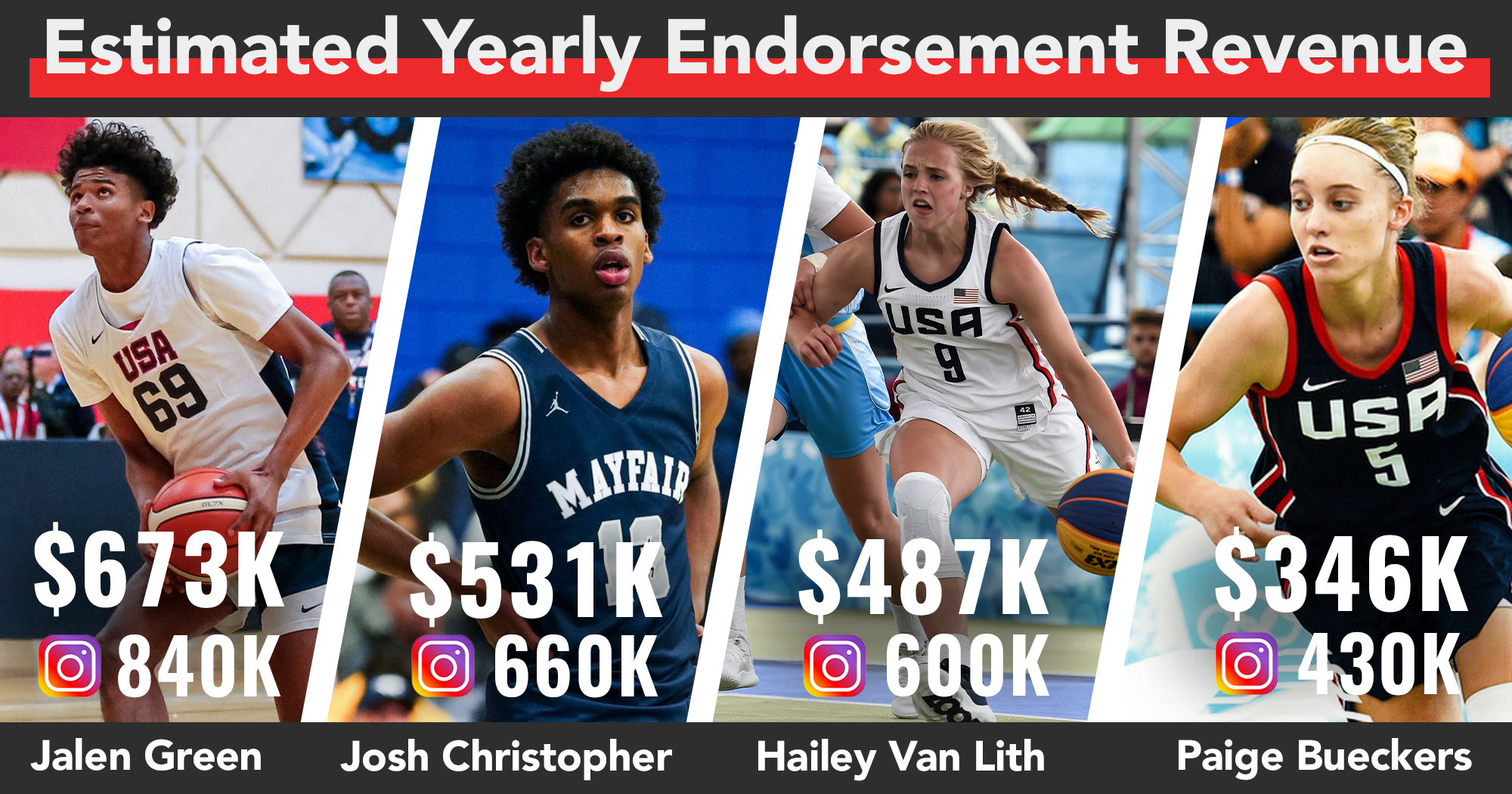 It’s worth pointing out that Olympic athletes – given their amateur status – provide a similar benchmark, as the USOC awards $38,000 for every gold medal, $22,000 for silver and $15,000 for bronze, which falls within the range of what the average student-athlete would receive based on the above described methodology. That being said,  24-year-old Olympic skier Mikaela Shiffrin earns more than $3 million in endorsements from the likes of Red Bull, Oakley and Longines, while 22-year-old swimmer Katie Ledecky signed a $7 million deal with TYR Sport. While it’s unlikely that any student-athlete would garner such high numbers, NIL will create a much larger pool of potential Olympic sport athletes to endorse brands interested in reaching their target customer.

There is no way of knowing exactly how much student-athletes will be able to garner for their NIL, especially in uncertain economic times where the continued threat of COVID will almost certainly have a deflationary effect on brands willingness to spend large amounts of dollars in sponsorship, whether on the professional or amateur levels. That being said, these projections do show the possibility of substantial amounts of money that student-athletes can generate from NIL deals, which means there may be a new and lucrative frontier of revenue opportunities for college athletics programs to explore to help mitigate possible budget deficits in the coming years.