Event Cancellation: What Is A Game Worth To Your Institution?

No matter the amount, football revenue is the lifeblood of countless collegiate athletic departments. The loss of even one game – especially a home contest – can have serious financial consequences.

That reality made the natural disasters that occurred across the United States this fall all the more worrying for collegiate athletic administrators. Aside from the primary concerns of human displacement and loss of life, the hurricanes in the south and east and the wildfires in the west have collectively caused billions in damages, including property loss and foregone revenue from the disruption of economic activities.

For some institutions, however, what could have been a significant loss of revenue and/or additional expenses as the result of game disruption were mitigated by event cancellation policies, which insures revenue/expenses against inclement weather and other “exposures.”

In this article, we provide an overview of this insurance in the college athletics space, discuss the recent weather-related events that impacted games this fall and highlight key takeaways athletic administrators can apply when considering their current policies or purchasing insurance for the first time.

Two major hurricanes made landfall in the U.S. in August and September: Harvey and Irma. Harvey hit Texas in late August before moving on to Louisiana, bringing with it torrential rains and flooding. Irma – whose winds measured close to 150 miles per hour – touched down in Florida on September 10, moving up the state and into parts of Georgia and Tennessee, among other states.

As a result of the hurricanes and other exposures, 18-20 FBS football games (and many other collegiate athletic contests) were cancelled, postponed, relocated or rescheduled, according to a review of publicly available data on team’s schedules. Among the impacted events were: 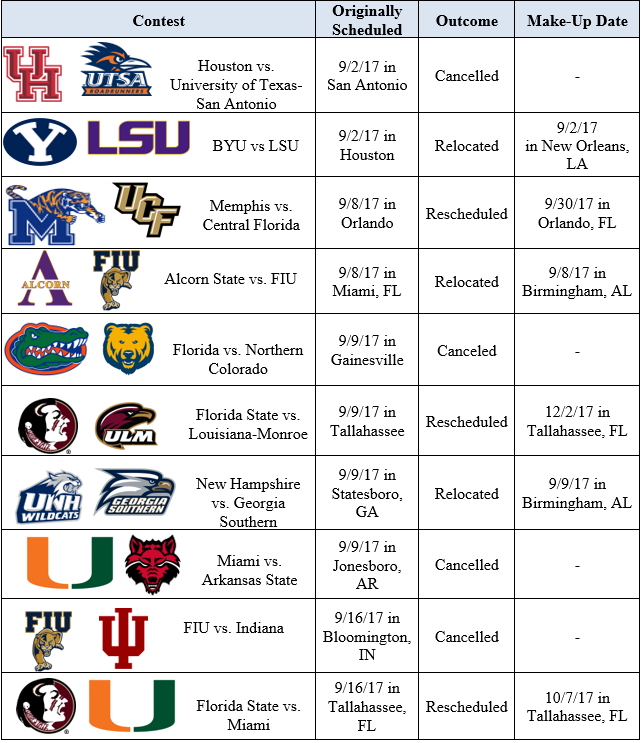 But the effects of the weather stretched further. Even institutions that didn’t see a game disrupted but still experienced inclement weather still might have incurred additional expenses by operating their event as scheduled. Heavy rain and/or winds often require increased security and emergency medical personnel, which can add significantly to a program’s expenses. In addition, the re-shuffling of team schedules meant that some non-conference, “guarantee game” opponents were bought out, potentially resulting in losses.

Though it’s difficult to measure the extent of the financial losses at this time, we estimate the economic losses for athletic departments as a result of the weather-related disruptions total $10-15 million.

At their core, event cancellation policies serve to protect a loss of revenue or additional expense should an event not proceed as originally planned. Within the intercollegiate athletics world, conferences and institutions insure projected revenues (normally on a per game basis) to protect against losses from cancellation, postponement or relocation. This insurance has become more important in the past 10-15 years as athletic revenues have risen; one industry expert now estimates that over half of all FBS schools carry event cancellation policies. These policies can be especially important in football, which differs from other sports with respect to the risk and impact of disruption:

These factors either increase the risk of substantial revenue loss or magnify its consequences, making event cancellation insurance critical.

The typical event cancellation policy covers several types of outcomes that may result from game disruption, including cancellation, abandonment, curtailment, postponement, or relocation. Coverage can be extended to protect travel expenses and/or game guarantees to away or neutral-site games that did not take place as originally scheduled.

While each loss scenario is unique, there are two primary types of losses:

1) Those resulting from cancellation:

Note that while television revenue typically does not factor into loss calculations, it can enter the equation if conference-level championship games are impacted.

As with any insurance policy, there are certain exclusions in event cancellation contracts. Covered exposures usually include inclement weather, terrorism, non-appearance (whether to due to a travel accident or delay), campus security issues, and communicable disease. Exposures that may not be covered under the typical event cancellation policy are war, nuclear or biological hazards, and failure by the institution to properly plan and execute the event.

Policies also outline the process of filing claims. Institutions are obligated to communicate potential or real losses to the insurer and cooperate in any investigation conducted by the insurer. Insurers also reserve the right to examine an institution’s financial records.

Similar to other types of insurance, event cancellation policies are intended to make the institution “whole” – in the same financial position they would have been after the cancelled event had occurred, or before the postponed event took place.

In light of the recent instances of event disruption, it may be worthwhile for collegiate athletic administrators to review their institution’s existing event cancellation policies or, if necessary, considering purchasing such insurance. Both groups – current and future policyholders – should consider the following when evaluating event cancellation insurance.

How do I determine if my institution needs event cancellation insurance?

For institutions or conferences who do not carry event cancellation insurance, administrators should ask: What is one football (or basketball) game worth to my institution? In the event of a tragedy (i.e. travel accident), what would the loss of an entire season mean? The overall importance of major sport revenue for the operation of the athletic department is a critical factor in determining whether an institution or conference should invest in an event cancellation policy.

How is cancellation insurance priced? What factors are key in cost determination?

The cost of event cancellation insurance varies according to the following factors: A) Amount of revenue to be insured; B) Location/geography; and C) loss history (risk). Pricing for event cancellation policies have become increasingly cost efficient over the past 10 years as more insurance companies have entered the space, fueling a highly competitive marketplace. Additionally, premiums have been driven down further by creative ways in which schools purchase this insurance (whether it be insuring a portion of the risk or determining ways to spread risk).

If my institution does not have event cancellation insurance, who should be involved in the decision to purchase it?

Given the multi-stakeholder nature of collegiate athletics, decisions regarding major athletic events should be collaborative. Schools looking to purchase event cancellation should involve any or all of the following: Athletic department officials from venue operations and finance; coaches; university attorneys and risk management officials; and conference administrators.

Can insurance protect fees from “guarantee games”? How does that work?

Short answer: Yes, but it can be complicated. While guarantees don’t factor in to losses resulting from conference contests, they can play a significant role in determining losses for non-conference games. Because a “guarantee” payment is normally an expense category for one team (normally a Power 5 school) and a revenue category for the other (usually a Group of 5 or FCS school), it would seem that accounting for such payments in event cancellation payouts would not be overly complex.

However, there could be potential issues if guarantee games are cancelled due to weather or other exposures – depending on how guarantees are managed. Contracts between institutions playing guarantee games normally give the institution paying the fee an “out” if the contest is cancelled by force majeure (unforeseeable circumstances). Meaning: If a game is cancelled due to inclement weather, the school paying the guarantee has no contractual obligation to do so, and therefore the guarantee fee should theoretically not be included as a line item in the school’s expenses. But, would the host school abide by the contractual parameters given the public relations implications of not following through on the guarantee? This discussion is one worth having because of the increased financial exposure that could result from contractual deviation.

My institution and/or conference currently hold event cancellation insurance. After the events of this fall, what should be reviewed?

In response to the weather-related game disruptions this fall, event cancellation policies should be reviewed along the following dimensions:

How does the timing of an event disruption determine how the amount of an insurance payout is?

Timing can be everything in the insurance world. If a school cancels a Saturday afternoon football game on Saturday morning, its unrecoverable expenditures (game set-up, sunk operational costs, etc.) are likely to be far greater than if the contest was cancelled on a Wednesday. The Saturday morning cancellation would thus result in a far larger payout than would a Wednesday cancellation.

Besides weather and the other “covered exposures” outlined above, what other types of “disruption” could cause financial loss? Are these situations covered by your current policy?

Given the recent developments in campus affairs, student activism, and player protests, it is likely that weather and other more traditional exposures will not comprise the extent of game disruptions in future years. Two specific scenarios that come to mind are 1) political/social events on campus that disrupt the school’s operation, including its athletic contests and 2) player protests that result in game cancellation or postponement. If for example, the events that occurred at the University of Virginia this past summer had impacted a football or basketball game, the institution could have filed a valid claim under an event cancellation policy, since the “exposure” is considered to be out of the school’s control. However, if players elected not to participate in games to protest amateurism or bring awareness to social justice issues, the resulting losses would not be covered under traditional cancellation policies on the theory that the players’ actions are within the authority of the school.

What will the impact of the recent hurricane season be on the event cancellation insurance market?

With revenues in collegiate athletic reaching record highs, the market for event cancellation insurance has been increasingly aggressive over the past 10 years. After the weather-related events of this fall, the expectation is that the market will continue to be active as institutions and conferences seek to safeguard their revenue from catastrophic events. It is possible that schools in coast-exposed areas may see the costs of their insurance increase.

If there is one maxim insurance brokers live by, it is that anything is insurable. Collegiate athletic departments may consider adapting the motto for their own needs: There are a variety of revenue streams that support its operations – any of which may be insurable. As these revenue streams continue to grow, the impact of event disruption will grow in lock step. Event cancellation insurance can help protect against the loss of revenue or increased expenses that result from those disruptions, ensuring athletic departments have the necessary resources to support its myriad operations. After this football season’s inclement weather, institutions have an opportunity to both review their current policies to confirm they are adequately covered, or purchase the insurance for the first time and begin safeguarding key resources.