Are College Baseball And Softball The NCAA’s Best Bet For Growth?

By The Entertainment Strategy Guy

Is there anything more American than baseball? It’s summer. Time to head to the ballpark, grab a hot dog, sing “Take Me Out to the Ballgame,” and watch the bats swing. For most of us, the venue is pretty obvious: the local Major League ballpark.

But are we missing an even better opportunity in college baseball? Is even that too shortsighted? Should we consider softball as impactful a driver of growth as baseball? I’d say so. In our quest to find a third revenue stream for the NCAA, let’s start with the sports that finish the NCAA calendar: baseball and softball.

As I wrote a couple days ago, I’m looking for ways to augment the NCAA model to help explain the business of entertainment for AthleticDirectorU. I’m going to approach these ventures using a framework that has worked for me: POCD (People, Opportunity, Context and Deal). I’m going to tweak that venture framework and apply it generally, but the goal will be to get down to a specific revenue upside (strategy is numbers). First, let’s set the table with some background.

Background: Why to get excited?

I’m not discovering a hidden gem here by looking at college baseball. The enthusiasm is already evident in articles on college baseball, like this one from Sports Business Journal, with headlines like, “Resources, Revenues on Deck for College Baseball.”

What drives this excitement? Well, I’d point to this table, which depicts the television ratings of the Men’s and Women’s College World Series championship games going back as far as I could find data (in millions of viewers): 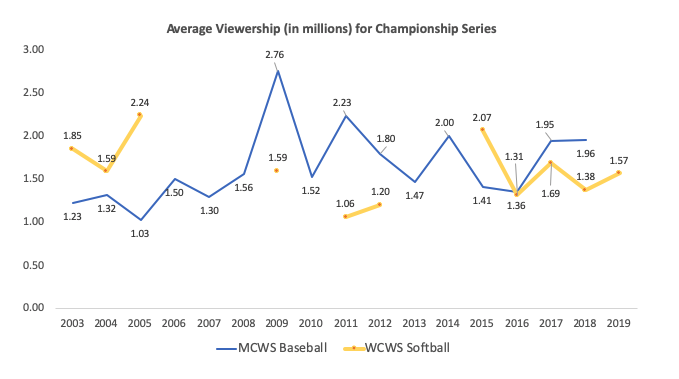 (Source: Multiple news articles on ratings. I couldn’t find one source for all viewership. The NCAA does have ratings, but I prefer viewership in millions.)

Let’s talk upside first. ESPN has expanded coverage of both college softball and baseball, carrying every game either on cable or digitally. That means up to 150 games for each sport. At their peaks, both sports can get into the viewership range of 2 million, and 30 million fans watched a college baseball game this playoffs. The WCWS averaged over 1 million for its whole series this year, and the championship series have averaged 1.4 million viewers this decade. Let’s put those numbers in a bit of context. 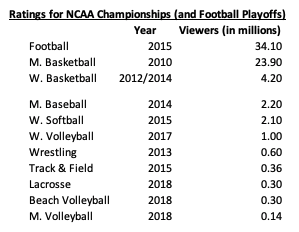 (Source: Again, multiple news articles. I tried to find the most recent or highest result for a selection of sports, though struggled to find some sports such as soccer or gymnastics.)

Meanwhile, you sort of have to squint to see growth for baseball and softball However, the biggest growth indicator isn’t necessarily captured in the championship game ratings, but rather the growth in ratings for regional and super regional games with expanded coverage. For baseball, ESPN averaged 680,000 viewers on ESPN for super regional games — again, airing every single one and filling in the live sports holes in ESPN’s programming.

Still, ratings only tell part of the story. Live attendance is also growing, particularly in the SEC. This has rewarded schools like Florida, Kentucky Oklahoma State and others who have built or renovated their on-campus baseball stadiums for upwards of $65 million. This in turn is increasing turnout at the respective college world series events.

At this point, I’d say we have enough data to get excited about the potential of both baseball and softball as revenue-generating sports. So let’s dig in with our framework to evaluate it further.

Usually, “people” is reserved for the specific people running a company. Take Uber, for example. Tremendous upside, but clearly some investors realized that the original founder was problematic. Eventually, he was forced out.

With college baseball, I don’t have a specific set of founders or executives to interview, so let’s tweak the question: Does the NCAA — and its members — have the institutional experience to manage college baseball? The answer here is a resounding yes. Many of the athletic directors from my own UCLA to Mississippi State to South Carolina are former ballplayers, which is a big plus because they’ll have the knowledge and wherewithal to grow the sport, but in a way that is still authentic to the core fans.

This is the crux of any deal: how much money can you make on it? There is a difference between Uber, which wants to take over all driving and transportation, and a local ice cream shop, which will have to compete in a crowded field for investors. I’ll get to the specific upside I see at the end of this piece, but let’s talk about the drivers of that potential upside.

First, baseball as a sport is already popular. It makes sense that it should be easier to convince a current MLB fan to add in some college baseball to their viewing schedule than to teach them how to watch lacrosse. (The latter is still possible, just harder.) Despite the premature calls of its death, baseball is easily one of the four major sports, and either second or third to the NFL, depending how you count. There are some concerns going forward (length of games and pace of play come to mind), but this sport could tap into a well of familiarity.

Second, the calendar looks good for college baseball. The College World Series starts in the middle of May, which is crowded with NBA and NHL playoffs, but not regular season games. By the middle of June, those sports are in their finals, leaving plenty of room for both softball and baseball to carve out a niche for their games.

The time is opportune for the NCAA to boost the profiles of baseball and softball. Whether you call it “The Streaming Wars” or the “Great Unbundling,” the traditional cable media bundle — embodied by your cable or satellite bill — is being replaced by over-the-top providers from ESPN+ to DAZN to…honestly we don’t quite know. Dr. Steve Dittmore has written about this here and here for AthleticDirectorU.

For the NCAA, this means that while in 2010 you negotiated with ESPN, Fox Sports and CBS/Turner for sports rights, by 2022, you could also be negotiating with services such as DAZN, Amazon, Apple, Warner Media and maybe a few we haven’t considered to the list. That gives the NCAA flexibility and increases the likelihood it can maximize the price on its media rights.

The deal is one of the neglected pieces of the art of business. Let’s stick with Uber. If you invested in Uber three years ago at a $48 price per share, then for a period of time — like right now — you’ve actually lost money on your investment. (Uber’s current share price is around $40-45.) In other words, sure, Uber may have the greatest upside in the world, but if you pay too much for that upside, you still lose money.

How do we interpret that for college baseball? Well, the “investment” for the NCAA could mean several things. For one, you don’t need to invest upfront capital, but if you want to grow the opportunity, you may need to hire more people, devote more resources, or stake some brand equity on it. Overall, though, college baseball tends to require fewer resources than some of the more exotic opportunities I plan to explore (like eSports or expanding into Asia). I’d call this a good deal.

To quantify the upside of baseball and softball, I looked at two sets of data points: the past deals with ESPN for NCAA championships and the deals with CBS/Turner for the NCAA March Madness tournament. Here are the current deals for basketball and non-basketball since about 2000:

(As a reminder, the NCAA doesn’t control the rights to the conference games. Those are controlled by the sports leagues themselves. My assumption, though, is that what helps the NCAA maximize playoff revenue will help the conferences in the regular season.)

The growth is fairly easy to see. By 2011, the total value of non revenue-generating sports nearly doubled for the NCAA (from $18 million or so per year to $35 million). Arguably, the value of the top three of those sports by ratings — women’s basketball, softball and baseball — is most of this value because of the sheer number of games being covered. Which also isn’t really captured in those tables since ESPN has expanded the total number of games covered tremendously since 2011.

The biggest upside, I think, would be for college baseball and softball — with their higher number of games and consequently greater potential reach to more Americans — to receive their own, separate sports rights deals in 2024. (I’d argue the same thing for women’s basketball too, given their ratings.) At that point, the question is, “How much are baseball and softball worth on their own?”

I wish I had a concrete answer. I thought of a few ways to triangulate, but I just don’t have enough detailed ratings and telecast information to answer it. Even if I did a strict ratings-to-costs analysis — as Dittmore did for the SEC football rights a little while back — I still don’t think the answer captures the true value of sports rights in the 2020s.

As I said above, the competition for sports rights will be huge. Especially as streamers move from a ratings model — driven by ads — to a customer lifetime value model — driven by subscriber retention. Having tons of baseball and softball games in the summer can help keep subscribers all over the country from dropping the subscriptions. With that in mind, the top side for college baseball and softball rights could reach $10-50 million per year, especially if the sport can grow in viewership and attendance.

(The Entertainment Strategy Guy writes under this pseudonym at his eponymous website. A former exec at a streaming company, he prefers writing to sending emails/attending meetings, so he launched his own website. He’s also a product of the Pac 12 system, twice. You can follow him on Twitter or Linked-In for regular thoughts and analysis on the business, strategy and economics of the media and entertainment industry.)