Now more than ever, social media is instrumental towards achieving success in college athletics.

Social media is a powerful tool not only for fans, but also for active and former student-athletes as well as prospective recruits and students. For many, social media is at the forefront of news consumption, communication and entertainment on a daily basis.

A prior ADU roundtable piece dove into the importance of social media engagement tools as a means of connection, marketing and storytelling in college athletics.

Brandon Harrison, a social media expert at the University of Wisconsin, shed some light on his mission during the conversation. “Here at Wisconsin, we take great pride in the people,” Harrison said. “Whether that’s our alumni, coaches, student-athletes or team support staff, social media is an engaging way for us to share the stories of the people here.”

Morgyn Seigfried, Kansas’ Associate AD for Creative Services and Communications, echoed similar thoughts during her time as Temple’s Associate AD. “We want to humanize our student-athletes and display their incredible personalities, because we truly believe we have some of the best kids in the country here at Temple, and their accomplishments are bigger than just their success on the field.”

In an effort to analyze social media efforts and successes around college athletics, ADU performed several studies to determine which universities are leading the digital charge.

To begin, each of the 292 Division-I institutions that have appeared in Learfield IMG’s College Directors’ Cup since 2005 were included in the study. Each of these institutions participate in Division-I basketball and/or FBS football, which are two of the main revenue influencers in college sports. The first piece of information was discovering the total social media following of the institutions. Social media platforms included in this study were Twitter, Facebook, Instagram and YouTube.

Overall, the studied institutions have an average total of about 205 thousand followers over the four social media platforms. About 51% of these followers are from Facebook, 28% from Twitter, 17% from Instagram and the remaining 4% from YouTube. 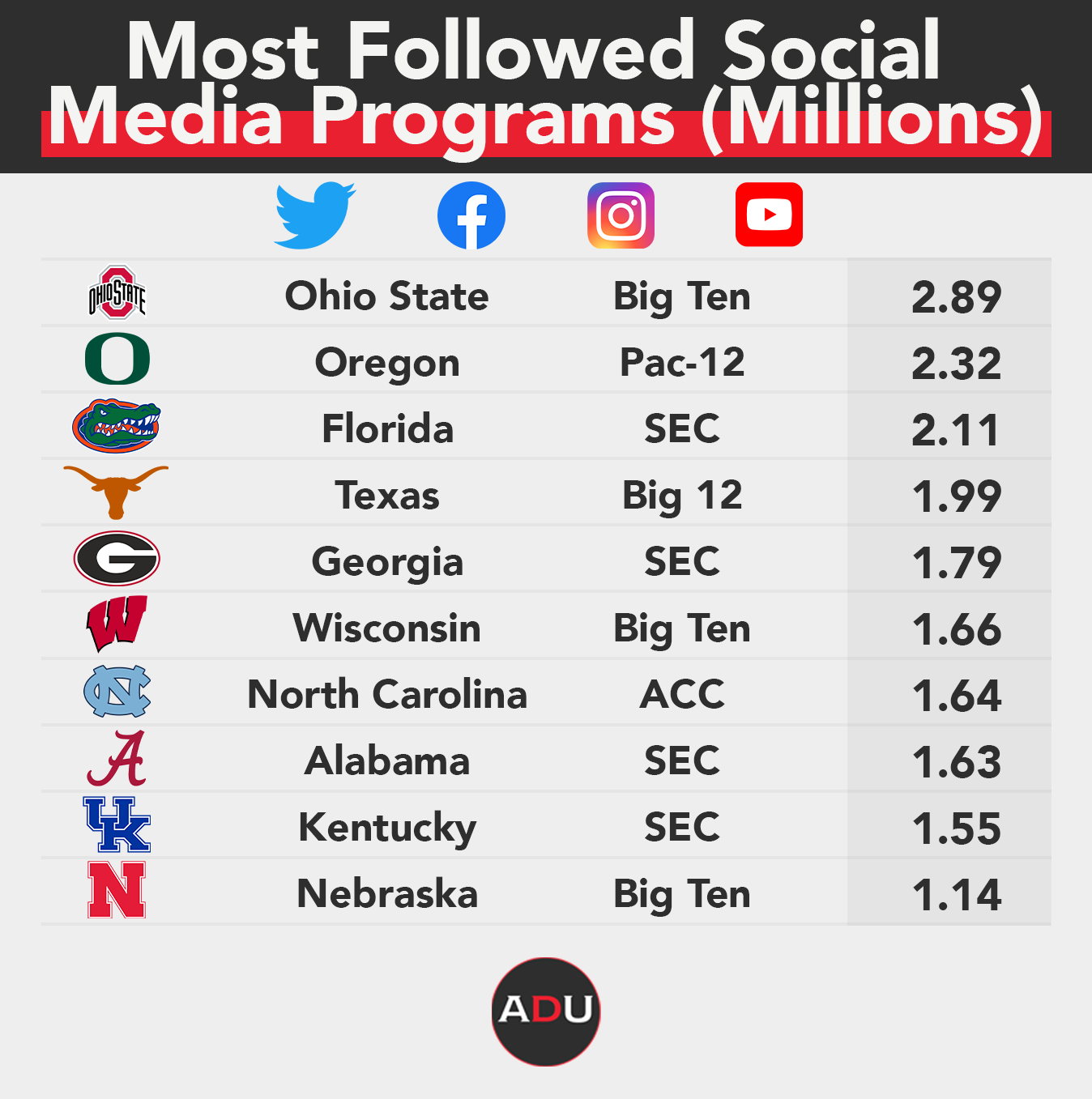 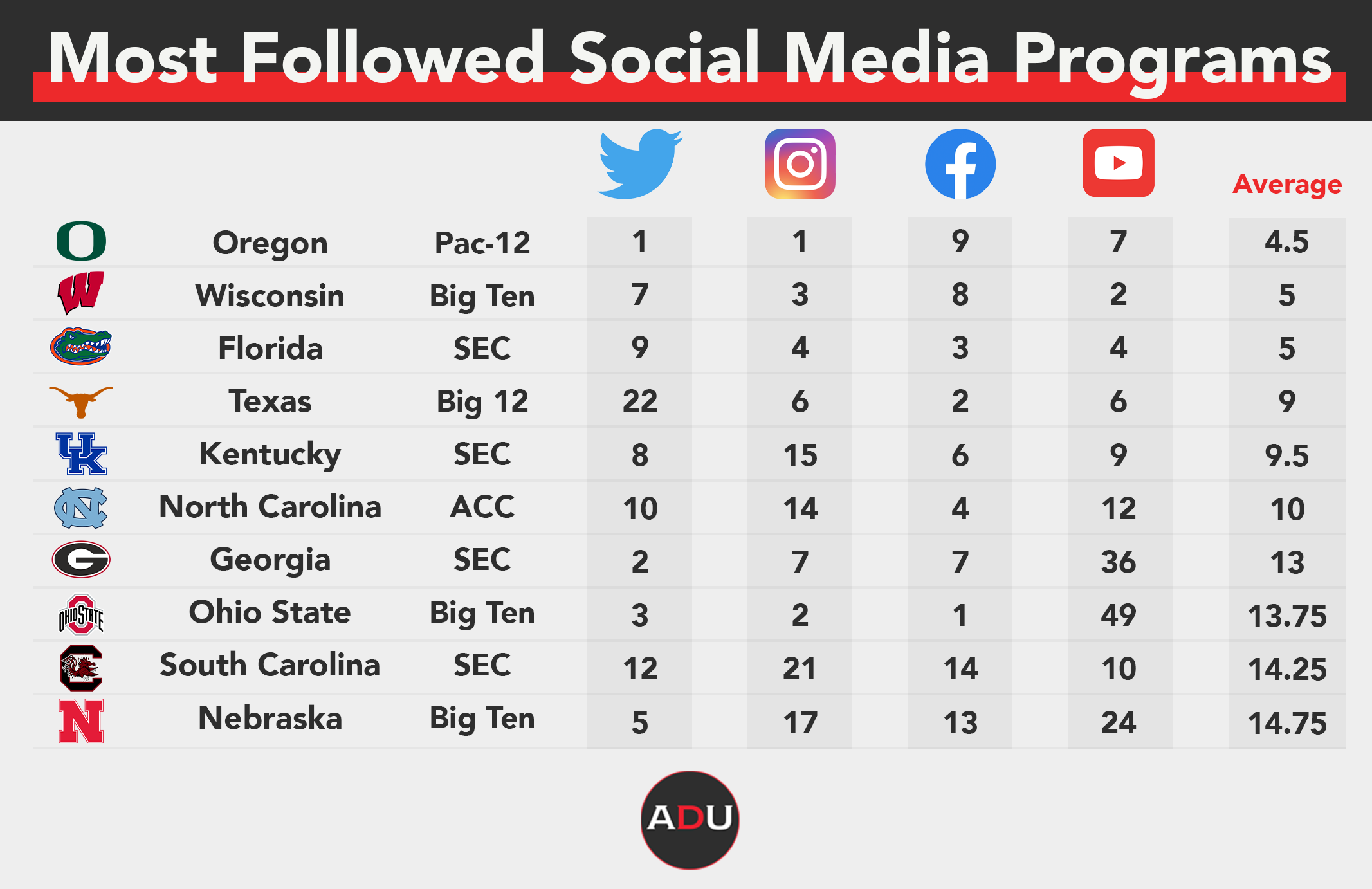 As for teams outside of the Power-Five, here are the leaders: 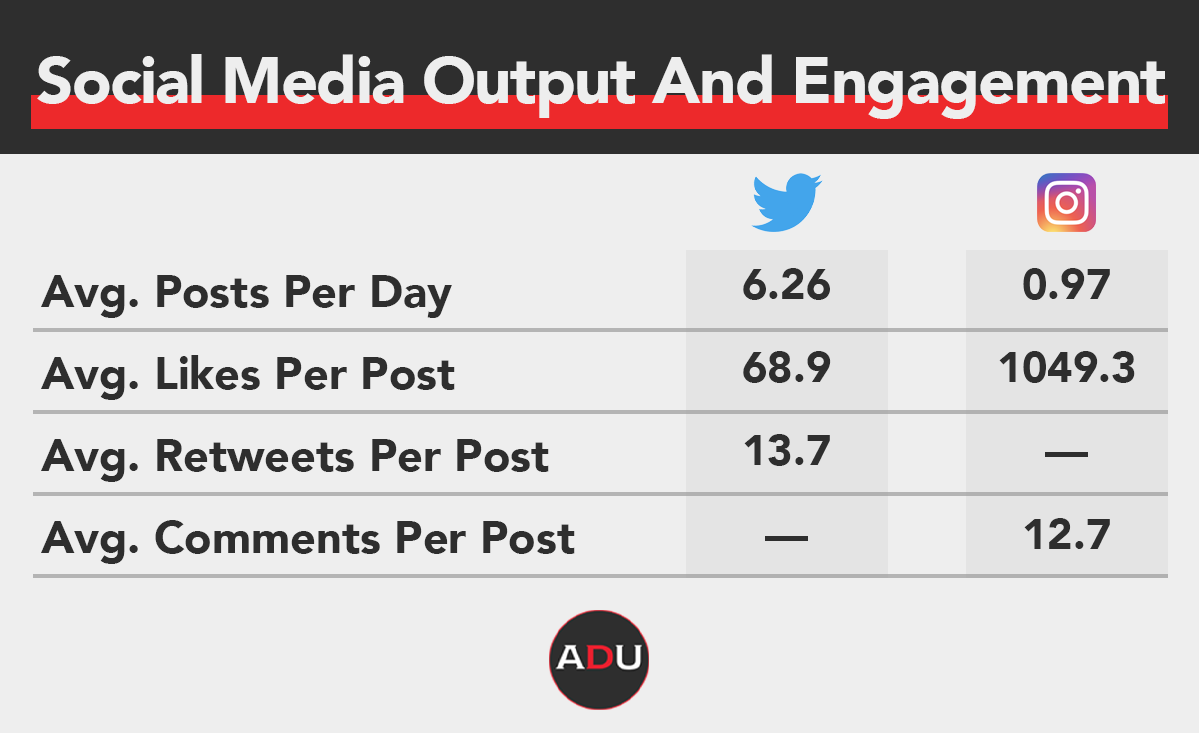 As for Instagram, most accounts range between a post every three days to 1-2 posts per day. These uploads normally generate a few hundred likes and very limited comments for smaller accounts and upwards of 4,000 likes and dozens of comments for larger accounts. Overall, university Instagram accounts have a much wider difference in audience and engagement while Twitter accounts have a larger variation in post volume.

Engagement isn’t always directly tied to posting frequency. Florida leads the nation in overall engagement and has the second-highest volume while Texas ranks second in overall engagement but is No. 204 in volume. Account inactivity should be avoided, though, as the universities that rank in the top 25 in engagement post more often than approximately 80% of accounts. A steady stream of quality and engaging content should be each social media manager’s goal.

The table below shows the top 10 universities in combined engagement on Twitter and Instagram as well as their posting volume and overall following. 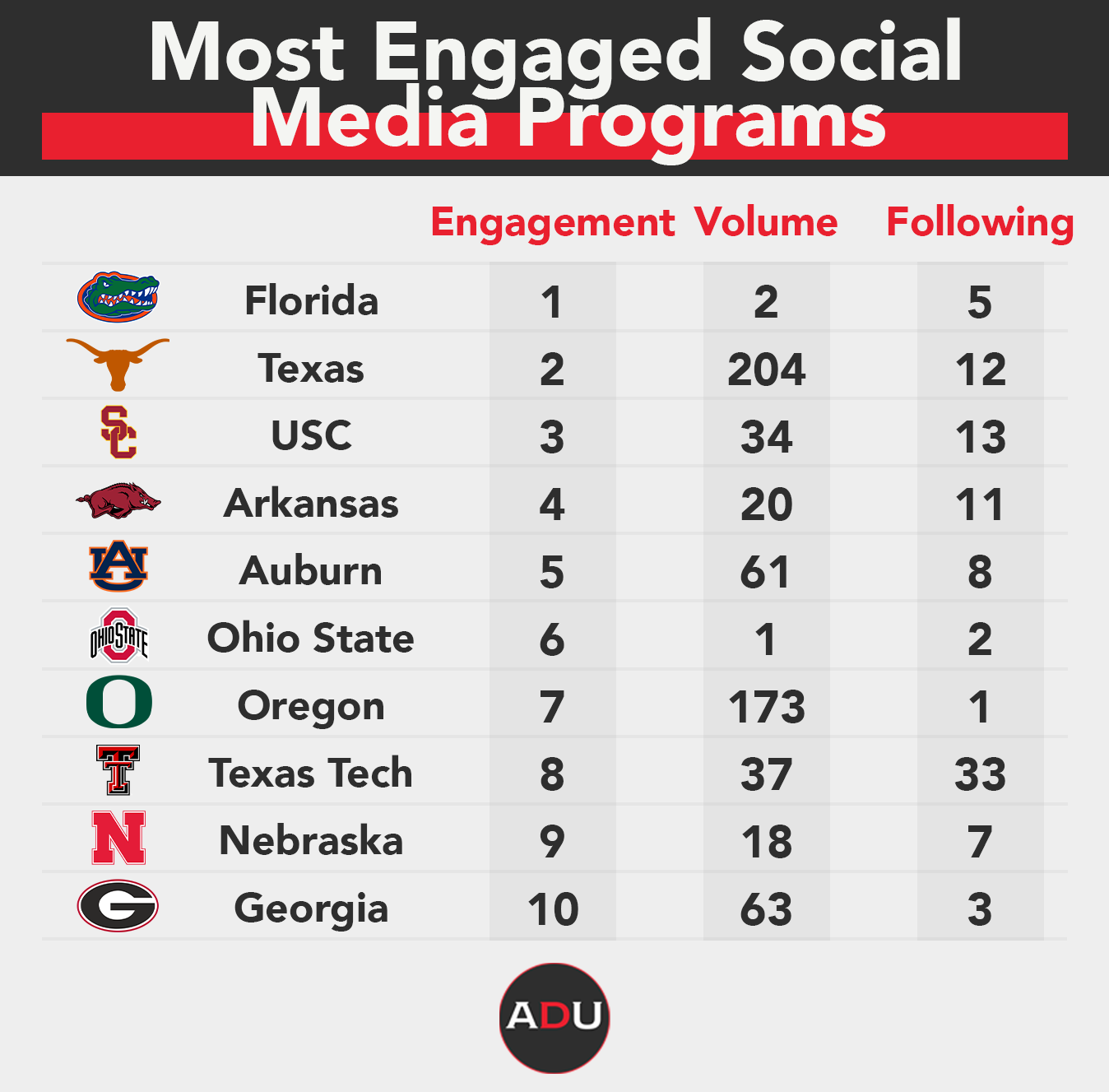 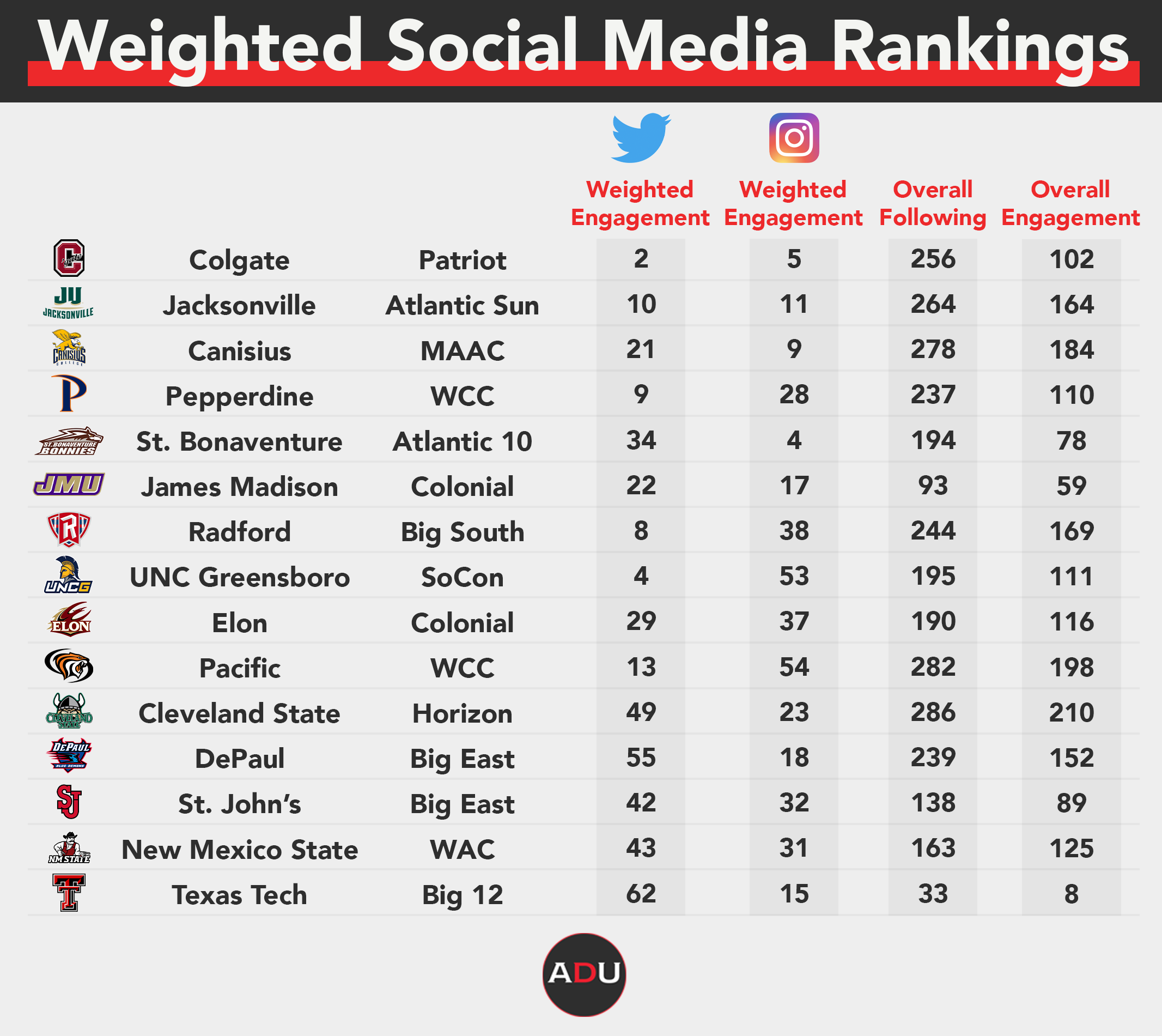 Colgate leads the way as the only university that ranks in the top five in both the Twitter and Instagram engagement/following quotient. Despite ranking 256th among the 292 studied teams in combined social media following, Colgate is 102nd in social media engagement. Its social media accounts combine compelling video highlights, athletic achievements, interviews and high-resolution photos from a variety of its sports teams to generate an engaging community for its followers.

A number of trends can be discovered from the accounts listed above. These accounts appear to be thoughtful and strategic with their social media decisions. This is evident through the use of high-quality photos and video, crisp and attractive graphics, engaging tone, and a variety of athletes, coaches and teams.

Here are a few examples of posts from these accounts that created the most engagement:

Team-specific hashtags are also commonplace in college athletics. On average, universities across the country use a specific team hashtag in roughly 16 percent of their social media posts. For example, this includes Canius and #gogriffs or James Madison’s #godukes, which are used in over half of the social media uploads on their respective accounts. These hashtags are another instance of developing brand awareness and keeping the audience connected.

So how is social media success — like the institutions listed above — created? A department-wide dedication towards digital media and content creation is a great place to start.

University athletics webpages can also carry significant weight. According to our findings, 74 percent of athletics websites had a dedicated social media directory page. Additionally, 30.1 percent of the websites had social media icon links in either the site’s header or footer. These links simply provide another pathway towards social media attention, which can be especially important if a university’s athletics account name isn’t obvious, such as an acronym or a phrase instead of a university name.

It should be no surprise that Power-Five members have more financial flexibility to support social media efforts while other universities have to first address things like administration, communications, academic support, compliance, facilities, and health and safety.

Taking advantage of a social media opportunity can be pivotal for a university, though. When UMBC men’s basketball became the first No. 16 seed to beat a No. 1 seed in the 2018 NCAA Tournament, multimedia director Zach Seidel shined. According to UMBC’s staff directory, the university’s main athletics Twitter account skyrocketed from 5,400 followers to 111 thousand followers in just 48 hours thanks to Seidel’s engaging dialogue during and after the game. The story of UMBC’s social media prowess the night of the big upset was shared on several major news outlets across the country, further bringing positive attention to the university.

It is impossible to know when a program’s next athletic achievement will come. Being prepared for those moments and having the right people in place to spark engagement is hugely important. As our society continues to venture further and further in the digital age, social media will continue to create a necessary bridge between the university’s athletics and its audience.

Start off heading east on Wynnefield until you get to Fairmount Park. Then it’s south on Belmont, left on the Avenue of the Republic, past the museums and memorials until you hit 34th street. The zoo is the best part… you know you’re getting close, and if you’re especially lucky you might catch a glimpse