As a quick refresher, the ratings methodology is measured on a 0-100 scale, combining national ranking, conference ranking, and total Directors’ Cup appearances.

One of the key components in this followup study is analyzing performance based on athletic director demographics.

A total of 598 athletic director tenures were measured in this study, including every institution that has appeared at least once in Learfield IMG College Directors’ Cup rankings since 2005.

The total number of athletic director tenures based on gender, diversity trends and the institution’s athletic tier is below.

The chart below shows a breakdown of gender performance vs. university average based on the institution’s athletic tier.

Females outperformed their male counterparts in Tier 1, Tier 3, Tier 4 and Tier 5 positions while males outperformed their female counterparts in Tier 2 positions. The widest gap is seen in Tier 5 positions in which male athletic directors have performed 5.86 points below their university average while female athletic directors have performed 0.44 pointst below their university average.

Here’s the list of active female athletic directors who own a tenure rating at least five points higher than their university average:

Much like the names listed above, several institutions have exceeded expectations within their own conferences by consistently reaching the postseason and winning league titles.

The table below displays each of the universities that have performed at least 30 percent better than their conference average since 2005. 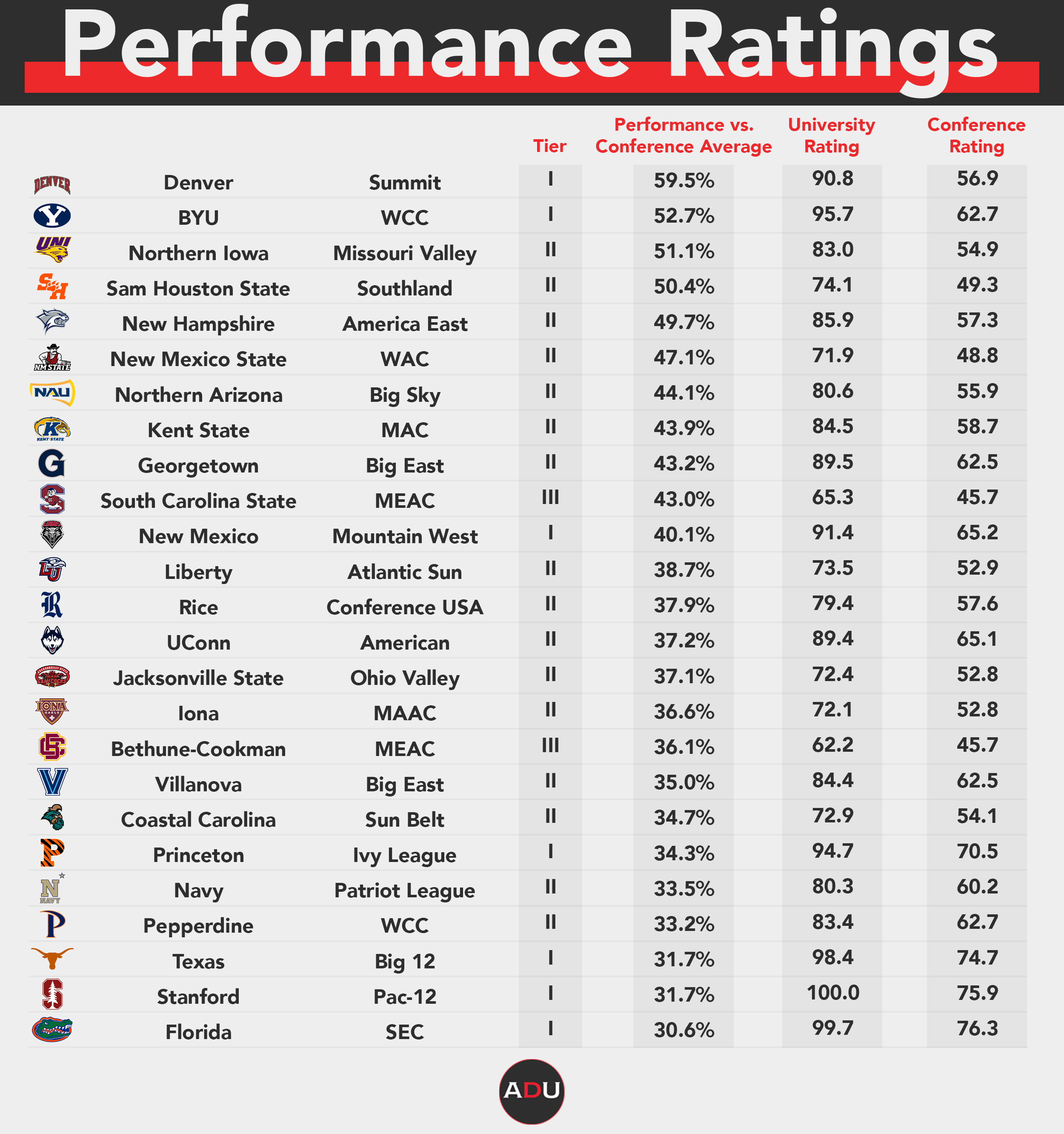 Denver, BYU, Northern Iowa and Sam Houston State have all performed 50 percent higher than their conference average. Out of the Summit League, Denver owns a performance rating of 90.8 in a conference where the average institution is rated at 56.9. Additionally, despite making up just 21.8 percent of all athletic director hires, 10 of the 25 institutions listed above (40 percent) have had either a female or minority athletic director in the same span.

Though there are no guarantees of athletic director success based on attributes like conference affiliation, previous experience, or demographics, analyzing athletic director performance and how it is achieved is vital information for anyone associated with college athletics. AthleticDirectorU’s performance studies should serve as a reminder that collegiate athletic success can be found at any institutional level through several types of leadership.

Over the past four months, 22 Division I athletic departments have collectively announced the discontinuance or suspension of 29 men’s sports affecting nearly 550 athletes (using FY19 EADA data) and 19 women’s sports affecting more than 250 athletes (using the same data set). Those figures do not include eight programs at Bowling Green, Brown, and

In the nearly four months since the COVID-19 pandemic began, college athletic administrators have been forced to confront the reality of reduced revenues. Budgeting 101 tells us when an organization cannot generate enough revenue, expenses need to be cut. Since March, we have seen sports eliminated, staff positions furloughed or cut, and scheduling adjusted to

COVID-19 has created a great number of uncertainties around college athletics, but in regard to university capital construction projects, there is a silver lining: the positive bond market combined with an emerging competitive construction market. As a result, colleges and universities should consider leveraging the current market conditions for projects going to bid in Q1-Q2