AthleticDirectorU has teamed with Spencer Fane to provide unprecedented insight into coaching contracts and salaries. Tonight is another offering in a series aimed to provide context and clarity.

We reviewed all forms of compensation for the head baseball coaches at National Collegiate Athletic Association member institutions of the Atlantic Coast, Big Ten, Big 12, Pac-12 and Southeastern Conferences (the, “Autonomy 5”). We analyzed these coaches’ employment agreements and related documents, which were obtained in partnership with USAToday, and created a sortable database of primary compensation (click here to view the database and here to review a short description of our methodology for calculating the amounts shown therein). In conjunction with this analysis, we researched and considered applicable biographical and performance data. And from this aggregate analysis we respectfully submit . . . 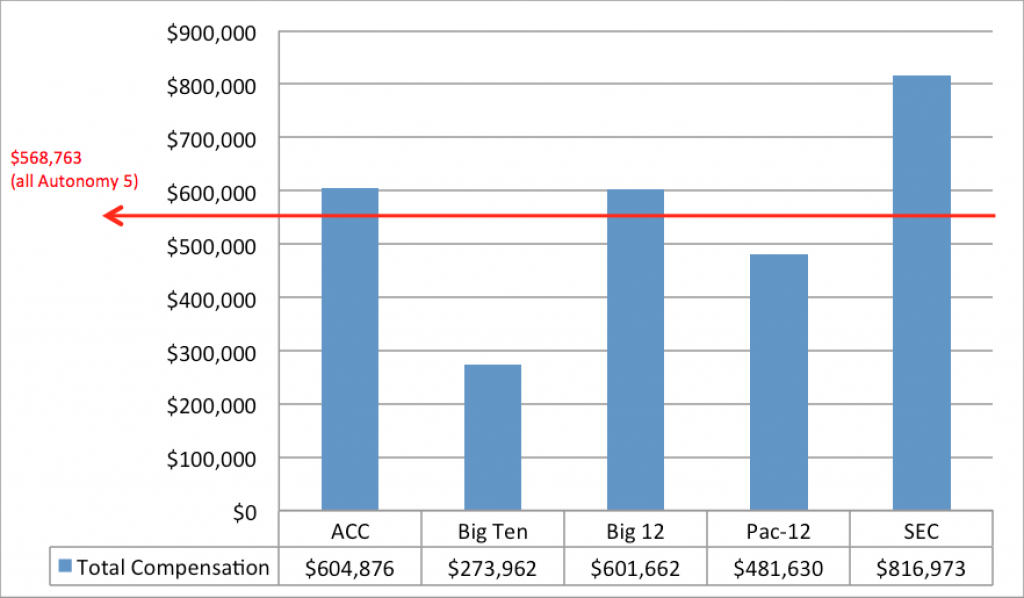 Over one-third (37.1%) of the cohort’s employment agreements contain provisions that award bonus compensation as a percentage of base salary or total annual compensation. These provisions create a compounding effect (see related discussion in Section III below) that is not shared to the same degree by the cohort’s athletic department coach colleagues: WBB (24.6%); MBB (10.6%); ADs (10.6%) and FB (6.1%).

The following chart depicts the Term and Tenure of the cohort’s employment agreements with their current university. For example, consider a coach who was hired on July 1, 2010 and who on July 1, 2016 received an extension of his then current employment agreement until June 30, 2021. For our purposes, the Term of that coach’s contract is 5 years (the duration of the current extension) and his tenure is 8 years (July 1, 2010-June 30, 2018). 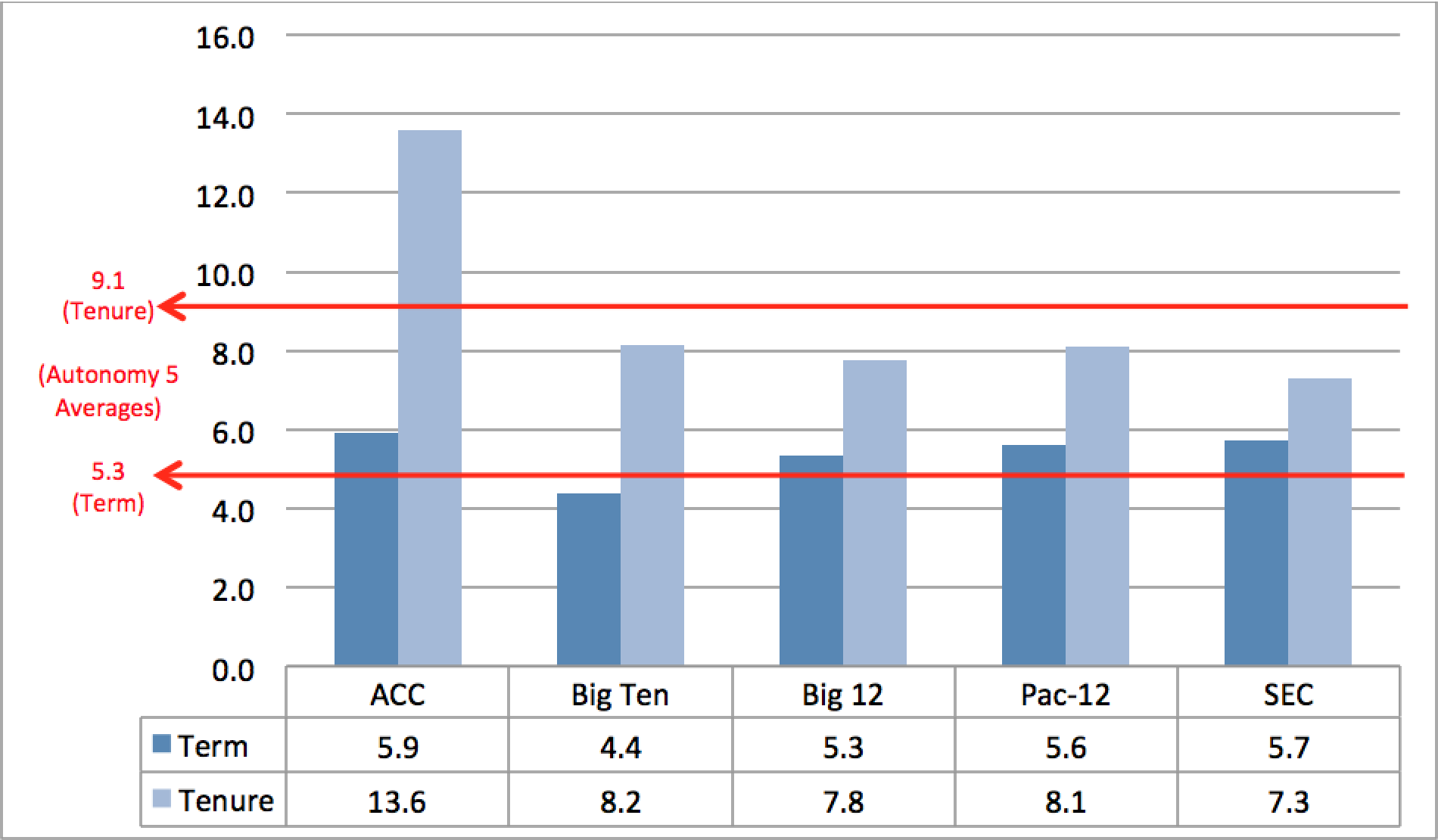 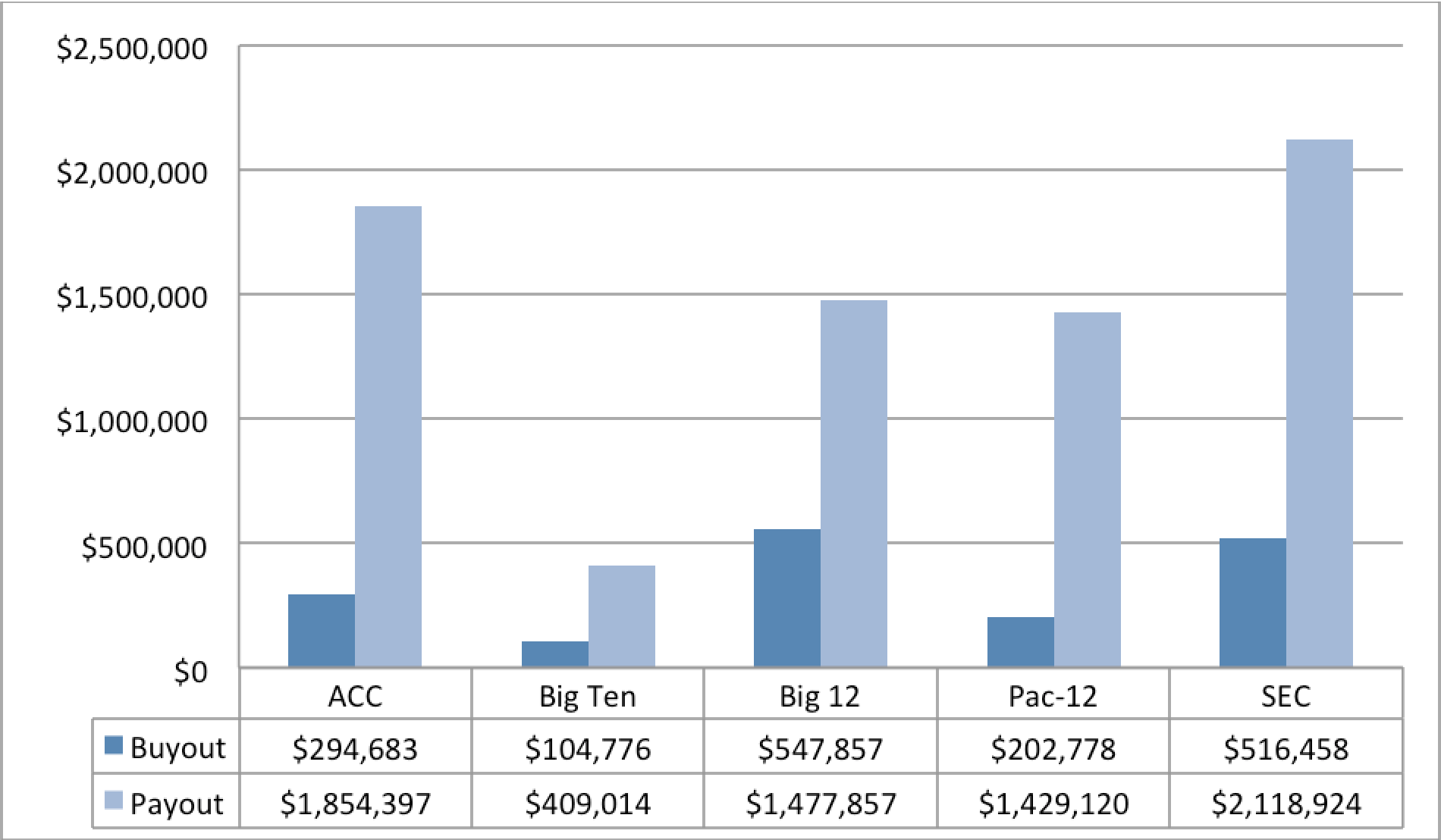 Coaches with no Buyout: 17 (not including coaches with buyouts that apply only if the coach accepts future employment within the conference)

Coaches with no Payout: 4 (including 2 coaches with a buyout, but no payout)

Annual Salary Escalators and Hosting: The Rich Get Richer

The aggregate impact of such provisions can exponentially increase college baseball coaches’ compensation in numerous ways: (a) immediate entitlement to cash bonuses based on competitive performance; (b) annual compensation increases beginning in subsequent contract years and continuing for the duration of the term of the subject employment agreement; (c) extensions to those terms also triggered, contractually or organically, by the same performance; (d) increased payouts to the coaches in the event of a termination without cause when such payouts are tied to (newly increased) annual compensation and (newly extended) terms (a fairly typical circumstance); and (e) the immediate and proven benefits that home-field advantage brings to on-field performance as well as the long-term benefits of more productive recruiting driven by the positive exposure to more and higher quality broadcast coverage of the NCAA Baseball Tournament, each of which is a compounding benefit to (a)-(d).  The rich get richer.

The benefits that coaches derive from their universities’ hosting tournament games are undeniable and ultimately flow to a coach’s bottom line.  As an important initial matter, the on-field competitive advantage of hosting these games is striking: the 16 teams that host a Regional annually earn, on average, roughly six of the eight berths in the College World Series, with the other 48 non-host teams claiming the other two spots.

For a host of reasons (no pun intended), most of them economic, the top 16 seeds aren’t always the host teams. But for those teams that are financially and competitively worthy of regular hosting opportunities, the programs and ultimately their coaches are well rewarded. Interestingly, none of the coach contracts reviewed included a mechanism for “netting” out or adjusting the coaches’ immediate and/or future compensation against the university’s hosting costs. An exhaustive treatment of the costs and logistics of hosting NCAA Regional and Super Regional baseball games is beyond the scope of this article. But, the NCAA’s Hosting Operations Manual is a worthy reference for a university estimating the economic and administrative outlays of hosting. Further adding to such costs is the potential for triggering the excise tax resulting from the above-described bonuses, salary escalators, term extensions and/or payouts.